As a result of a missile airstrike on a House of Culture in Sievierodonetsk, three people were killed. Seven are in hospitals. Another air strike destroyed a dispensary where people could be. A local resident was killed by shelling on the street. A mother and son died in Sievierodonetsk. In Lysychansk, a school building and two houses were destroyed, in Hirne — 18 houses, in Vrubivka — 7. There is a lot of damage in the village of Synetskyy.

In Severodonetsk, as a result of shelling, the Azot plant entrance checkpoint was damaged. There are almost no surviving administrative buildings left on the territory of the chemical plant. Over the past day, the Russians have used artillery and MLRS in the areas of Sievierodonetsk, Lysychansk, Ustynivka, Loskutivka, Metolkine, Borovske, Mykolaivka and Novoivanivka. The invaders launched airstrikes on Loskutivka and Ustynivka.

Five residential buildings were damaged as a result of a rocket attack in the morning in Mykolaiv, — broken windows, window panes, walls and ceilings were destroyed, fires broke out in two apartments in different buildings. The victims were released and the fires were extinguished — one on an area of 3 sq.m., the second — 10 sq.m. As a result of the shelling, one man and another person were killed. Twenty were injured, at least 16 of them were hospitalized. 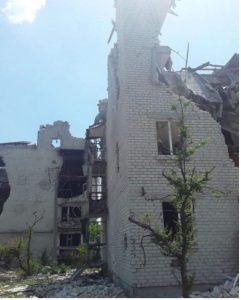 At night the Russian occupiers using artillery fired at Kryvyi Rih district of Dnipropetrivsk region, and in the morning using mortars — Sumy region. The invaders hit the village of Velyka Kostromka. No harm done. In the Sumy region, the Khotyn community came under fire from mortars at about 5:00 am. About 30 parishes. Previously, there are no casualties and destruction. 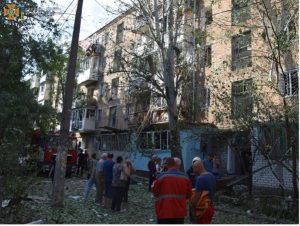 Over the past day, the enemy shelled the Shevchenkovsky, Novobavarsky and Kholodnohirsky districts of the city of Kharkov. Industrial buildings and a private enterprise buildings were damaged, there were no victims or casualties. In the Kharkiv region, private households in Derhachi were damaged, an outbuilding and a technical building in the village of Pesochin were on fire. 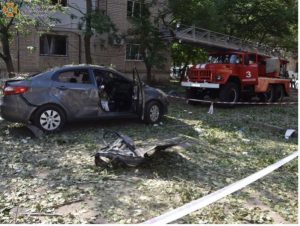 In the Chuguev district, a private house and a garage in the village of Korobochkino were damaged, private vehicles were destroyed. Zolochiv was shelled with cluster munitions, 7 houses were damaged. An 82-year-old woman was injured. In Morozivka, Izyum district, a 70-year-old man was injured. In the Kharkiv direction, the enemy tried to carry out armed reconnaissance in the Kochubeivka area, but suffered losses and retreated. In the area of Izyum, the invaders are trying to continue the offensive in the Sloviansk direction. Our defenders reflect all attacks of the enemy.

Mariupol risks cholera and dysentery outbreak. There are thousands of spontaneous burials in the city, there is no sewerage system. Now the temperature is rising and it’s starting to rain. All eroded soil ends up in rivers, water wells and springs where people get their water from. This can lead to thousands of deaths of Mariupol residents. One hundred thousand people are simply kept in the ghetto. The vast majority of them are pensioners. The mayor’s office also added that the invaders began to separate the military settlements off from the citizens in order to somehow protect their own lives. At the same time, they do not take any actions to secure Mariupol residents.