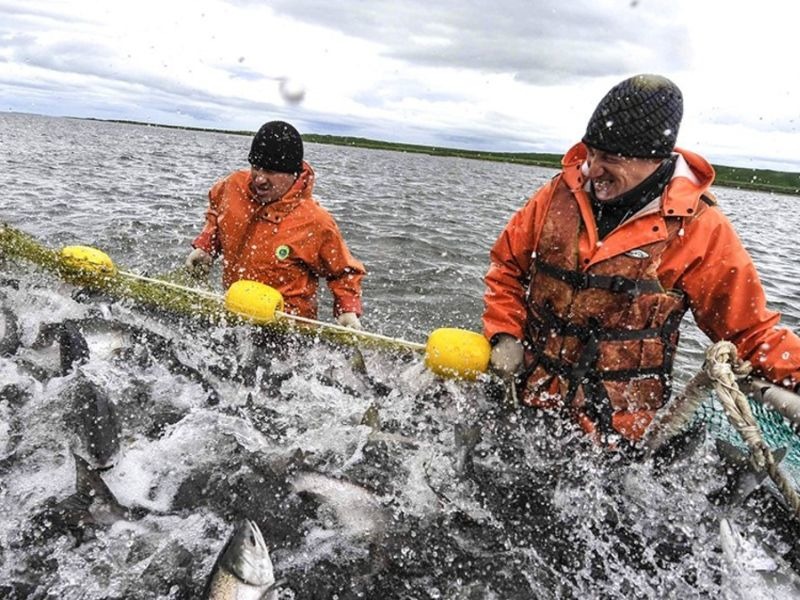 Not so long ago economists, mostly associated with the Russian media, commenting on all sorts of trouble from EU and US sanctions for Russia’s aggression against Ukraine, among other disputes, mostly agreed that at least commercial fisheries in Russia will not be threatened.

Of course, to a certain extent, sanctions pressure will hit crab fishing. This fishery was not carried out for the domestic market — $40 per kilogram of crab meat is an exorbitant price for an ordinary Russian. 50 % of the products were previously exported to the EU and the USA. So, either it will have to be sold in other markets with an appropriate discount, because no one is waiting for them there, or fishing will have to be significantly reduced.

However, this situation cannot be considered defining, given the seasonal nature of the work, the relatively insignificant production volumes, their cost, the number of personnel involved and other material resources.

Another thing is industrial fishing carried out by the Russian fishing fleet in the waters of four oceans by hundreds of seiners, trawlers, drifters with the involvement of thousands of sailors-fishermen. Undoubtedly, the imposed sanctions will not prohibit Russians from fishing in the waters of the Pacific, Indian, and south-eastern Atlantic Oceans. But the situation is somewhat different about the northern part of the Atlantic and the Barents Sea. For Russians, the waters controlled by the EU member states and the UK are almost closed. And this «almost», as it turned out, has its own name. Or rather, two names. It is this “almost” that allows Russian fishermen to catch about 500 thousand tons of valuable commercial fish species in 2022 in the northern seas of Europe (the entire fish catch of the Russian Federation in the entire Pacific Ocean is approximately 350 thousand tons).

The name of the first «almost» is Norway. So, the country is not a member of the EU and its government has supported the EU sanctions since 2014 on the vast majority of points except for issues related to industrial fishing, and this is surprising. The turnover between the Russian Federation and Norway has never been defining, and for the last 3-4 years it has not exceeded 1% of the total volume of foreign trade operations. This is much less than 300 million dollars in terms of government imports to the Russian Federation. As they say, you cannot take more. At the same time, Russian counter-sanctions against Norway forced a third of the enterprises of its fishing industry between 2014 and 2017 to significantly reduce production capacity or stop working. Only momentary losses of Norway from Russian sanctions amounted to 2 billion dollars. USA excluding lost profits. Why, under such conditions, does Norway allow Russian fishing vessels to use Norwegian ports and coordinate their quotas for fishing in the waters of their exclusive economic zone? Wouldn’t it be better to seize the moment (5 and 6 packages of EU sanctions) and force the ships of a rogue country out of their own industrial waters, releasing them for their fishermen? At present, these questions remain unanswered.

The second «almost» is called the Faroe Islands and it’s amazing. Indeed, where are the Faroe Islands, and where is Russia, and what generally connects them? As part of Denmark, the Faroe Islands are under the full protection of NATO. And as an autonomy with broad powers, they, by their own sovereign decision, are not part of the European Union, that is, EU sanctions, by and large, DO NOT concern them. However, at the beginning of May this year the Parliament of the Faroe Islands unanimously adopted a law allowing the autonomous government to impose any sanctions against the Russian Federation and Belarus, except for those related to the fishing industry and the entry of Russian fishing vessels into their ports.

And here another question arises: what, in fact, besides fishing quotas and permits for the ports can the Faroe Islands give or not give Russia? Ban broadcasting «Sputnik TV»? Oh yes, it’s already done. You can applaud. But the author does not even try to analyse any indicators of the joint economic activity of these entities, since there is only fish there. That is why Russian seiners stay near the Faroe Islands and fish even in those waters that are under the general management of the Faroe Islands and the UK. And the UK has long banned such activities for the Russians with its own sanctions. And this is already a certain tension in bilateral relations. However, oddly enough, the government of the autonomy of the Faroe Islands does not have the authority to engage in foreign policy, this is the prerogative of the central government of Denmark. This means that the problem of normalizing the issue of the procedure for using maritime economic zones common with the UK and extending sanctions on them is becoming a «headache» of official Copenhagen. These are the Faroese officials: sanctions have been adopted, and no one is hurt by this. Well, maybe the British are hurt a little …