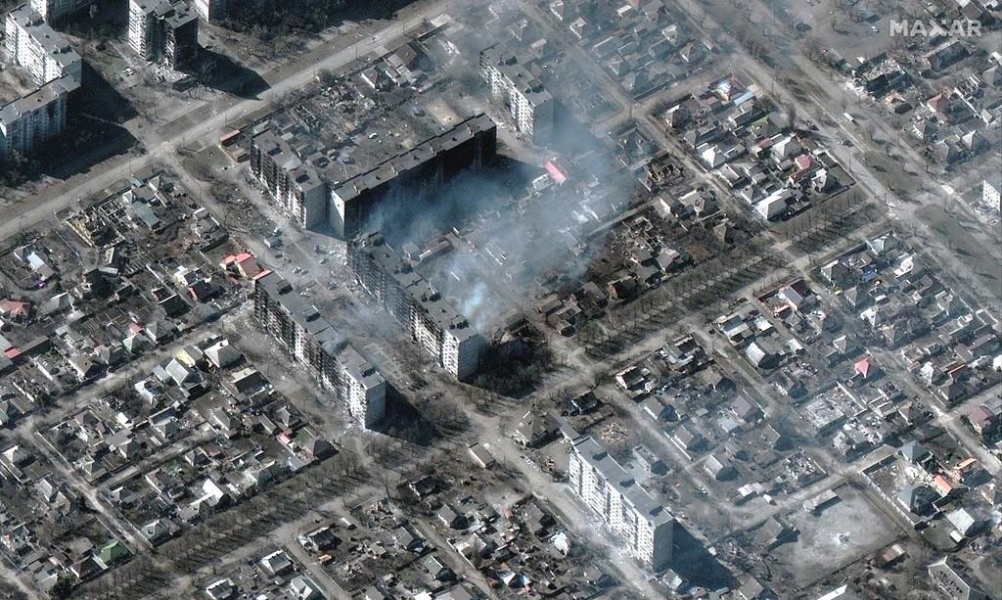 Russian forces had bombed hospital in Bashtanka, Mykolaiv region, the Head of Mykolaiv Regional Council Hanna Zamazeeva reported on the evening of April 19.

There are wounded, but no children are harmed. Also, nobody was killed as a result of the attack.

In the area of ​​Izyum, Kharkiv region, 12 Ukrainian servicemen had reported experiencing shortness of breath and eye redness after the attack by Russian forces, the Adviser to the Head of the President’s Office Oleksiy Arestovych announced on the air of “Feigin Live” on April 19.

“Here, unlike in Mariupol, where some substance was dropped from a quadcopter, it was a regular thing – a regular projectile or a missile. A missile is unlikely, rather a projectile or other means of delivery, but we need to figure that out,” he said.

The invaders had already forcibly deported 500,000 Ukrainians to Russia, including 121,000 children, said the Permanent Representative of Ukraine to the UN Serhiy Kyslytsia during a meeting of the UN Security Council on the humanitarian situation in Ukraine.

“Filtration camps are an integral part of such relocation,” he said. According to him, at least 20,000 Ukrainians are being held in filtration camps “on the Mangush-Nikolske-Yalta line and about 5-7,000 in Bezimenne, Donetsk region.”

According to him, Ukrainians deported to Russia are sent to depressed regions, including the northern territories and the island of Sakhalin, and then banned from leaving Russia for two years.

The UN warns that Russia’s blockade of ports in southern Ukraine could cause a global food catastrophe, reports Ukraine Crisis Media Center.

It is noted that usually, these ports helped to feed 400 million people worldwide. Now they are closed due to the military threat by Russia.

“If Ukrainian ports do not open, 45 million people in 38 countries are at risk of famine, death and starvation. They will have food riots and mass migration,” the organization warns.

Russian troops shelled Novodruzhesk in the Luhansk region at night. Two houses in the city center caught on fire. The number of houses damaged by debris and the blast is being clarified, says the head of the Luhansk Regional State Administration Serhiy Haidai.

Russian invaders in Mariupol began to threaten civilians with shooting them for refusing to tie white ribbons, the Adviser to the Mayor of Mariupol Petro Andryushchenko reports.

As of the morning of April 19, due to a full-scale Russian invasion of Ukraine, 373 children have been injured and 205 more have died, reports the Prosecutor General’s Office.

As a result of the bombings and shelling, 1,141 educational institutions were damaged, 99 of which were completely destroyed.

Commander of the 36th Marine Brigade Serhiy Volyna, who defends Azovstal in Mariupol, asks world leaders to take several hundred civilians and military from the plant to a safe place – to the territory of a third state.

“This may be our last appeal. We have only a few days or hours left,” he said.

Former British Ambassador to Ukraine Leigh Turner told Sky News that the world is facing a “protracted conflict” in Ukraine, and it would be important for the West to continue to supply weapons to Kyiv.

“The Ukrainian people have suffered and are suffering. As far as we can see, hundreds of people are dying every day,” Turner said.

Adviser to the Mayor of Mariupol Petro Andryushchenko reported that the propagandists had filmed a video in Mariupol about the so-called school opening. To do this, they gathered children from all over the city. The director of the school was the former head of the school №3. There was no record of whether the collaboration was coerced.

In addition, the local authorities of Mariupol identified the so-called Minister of Education of “DPR” in Mariupol – the head of the Maritime Lyceum in Mariupol Vyacheslav Miroshnichenko. According to the adviser, he offered his services to the enemy himself.

“The standard tactics of the invaders’ cooperation with collaborators involves the cynical exploitation of children and their difficult psychological state for propaganda purposes – there’s nothing human left in these inhumans.”

Ukrainian Air Force Command denied claims that Ukraine received new aircraft from partners, as the Pentagon spokesman had said the day before.

Fighters of the Azov regiment defending the blocked Mariupol, published a video shot in the city.

WARNING! The video includes disturbing content that can be shocking to viewers.

Putin wants to carry out forced mobilization in the occupied territories of Zaporizhzhia and Kherson regions. Before doing so, they plan to hold fake referendums.

It is planned that illegally “mobilized” Ukrainians will be sent to fight in the areas of active hostilities in order to attack the positions of the Armed Forces.

“In fact, this is an attempt to destroy Ukraine at the hands of Ukrainians themselves. As previously reported, to organize referendums, personal data of residents of the temporarily occupied territories are collected in advance allegedly for “humanitarian aid” purposes or social benefits. On the day of the “voting”, the FSB officers will fill out the ballots using the information received, without the consent and physical presence of the Ukrainians themselves,” the Defence Intelligence of Ukraine reports.

At least 2,000 families lost their apartments in Irpin, Kyiv region, as a result of the Russian army operations, reports the head of the humanitarian headquarters of the Kyiv Regional Military Administration Oleksiy Kuleba.

The Mayor of Irpin Alexander Markushin says that the air-dropped bomb found in the city weighs 250 kilograms.

In Mariupol, where Ukraine’s defense forces are still concentrated, intense fighting continues. Artillery systems and tanks are used. The invaders are destroying everything that is left on the Azovstal plant.

Civilians are afraid to leave through the humanitarian corridors opened by the Russian party due to intense shelling. Most importantly, civilians have not yet been guaranteed safe exit from the city.

It is known that there are several bunkers / basements where civilians are located. In each of them there are around 80-100 civilians, including small children, the Deputy Commander of the Azov Regiment Svyatoslav Palamar (call sign “Kalyna”) announced on Ukrainian TV channels.

Currently, Russian forces in Mariupol are significantly exceeding Ukrainian forces. In addition, according to Kalyna, new Russian military equipment was transferred to the city. Ukrainian fighters managed to destroy the enemy tank marked “V”, which had been previously seen in the Kyiv region.

On April 20, the humanitarian corridor from Mariupol did not work as planned. The invaders have failed to hold a ceasefire because the Russian command does not control their military personnel, said Deputy Prime Minister of Ukraine Iryna Vereshchuk.“Also, due to their inherent disorganization and negligence, the invaders were unable to provide timely transportation of people to the point where dozens of our buses and ambulances were waiting,” the Minister said.