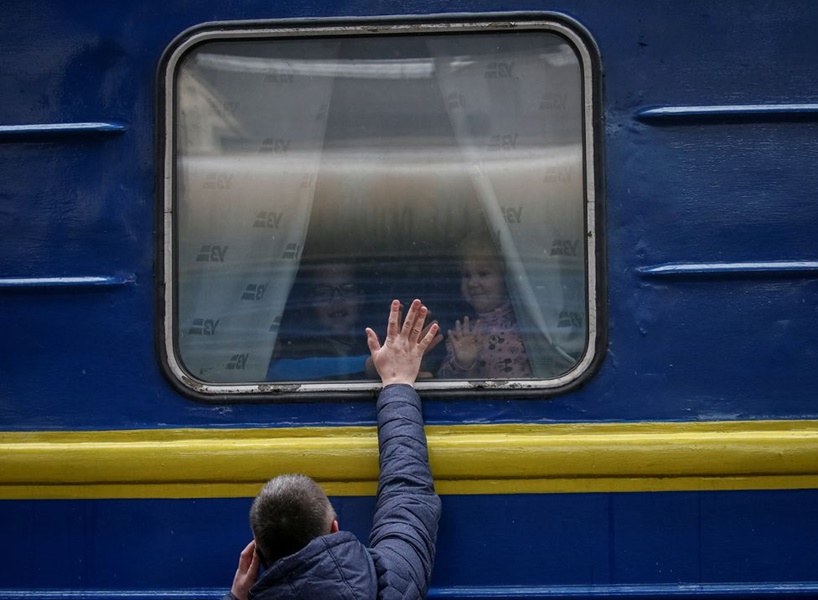 Caught in the cross-fire between home and safety, veteran Ukrainian Journalist Larysa Mudrak, shares her powerful journey to freedom in her own words and right from the war zone.

Before the war, my life was a state of bliss. All my dreams came to fruition. Sometimes I’d pinch myself, convinced that things seemed too good to be true.

A little about myself: In 1991, I graduated from the Taras Shevchenko National University of Kyiv with a journalism degree. I was a presenter for Radio Liberty in Kyiv, Munich and Prague, where I interviewed Bill Clinton, Václav Havel and hundreds of other personalities. Then came television; where I worked on programmes like Vikna on the TET and ICTV channels respectively (in Ukraine). I was the editor-in-chief of the Ukrainian version of Business Week, which was published under the licence of the Financial Times, and I also worked as the CEO of the newspaper New Russian Word in New York. I was a participant in the Orange Revolution. At the invitation of Ukraine’s former president Viktor Yushchenko, I created a new press service of the democratic type—and managed it for five years.

I also graduated from the Diplomatic Academy of Ukraine and worked as a representative of Ukraine in the CDMSI (Council of Europe Steering Committee on Media and Information Society). I was the first deputy chairman of the National Council of Television and Radio Broadcasting of Ukraine. I participated in the Revolution of Dignity in 2014 at the end of the Euromaidan protests.

Since 2015, I’ve been the president of the consulting company Win Win Communication and CEO of the Family Business Network (FBN) Ukraine.

My husband, Andriy Degtyarev, was the CEO of MIGNews media holdings for 20 years. Solomiya, my daughter, is 22 and attends college in New York. My son, Dmytro, graduated from the University of London and works for a venture capital company in Switzerland. At 50, I began to live my life and pursue my calling as an adviser to politicians and businesses. This was my life before the war.

I wake up at 7.30am after a deep slumber, to see my phone has 29 missed calls from our friends and acquaintances.

Almost immediately, my daughter starts shouting from her room: “Mum! Mum! Putin attacked us! We need to run away!”

I think to myself: I will not go anywhere, forget about it. This resolve is short-lived.

My cousin, whose home we are in, is a former soldier and colonel, shouts to me several times and tells us we must go. We need to head to the country village of Krasne (Mykhailivska Rubezhivka which is around 10km from Irpin where we currently are). He assures me this will be much safer than remaining in Kyiv.

In the end, we leave Irpin and stay near Bucha for 13 days.

During this time, we are constantly under fire. Tanks and artillery blast on, bombing from the sky, as planes and combat helicopters fly unusually low.

There are around 200 people in the country settlement we’re in, mostly made up of elderly people, children of all ages and women. Many of the people who came here from Kyiv on the first day of the invasion will return to the city in a couple of days. No one believes that the war will last long, and anticipates for it to be over within the next few days.

Yet, as the end of the first week of the occupation nears, 30 Russian tanks and 29 armoured vehicles have entered our village. Led by my brother, we plan ahead and manage to hide in our houses, preparing to self-defend.

On one of the days, we’re greeted with three unexpected visitors—Russian soldiers. They ask for water and food. Those in the village ask why they’re here. The conversation goes:

Soldier: “We do not touch the civilian population.”

Lady: “So why are you fighting us?”

Soldier: “Because if we do not follow the orders of Kadyrov’s commanders [Ramzan Kadyrov is currently the head of the Chechen Republic working in tandem with Putin], we will be punished. We are under his charge.”

I watch as Grandmother gives them their water, while cursing it.

Food is scarce. I walk around the village to ask for at least 1 potato and 1 onion for soup. There are 13 of us, mostly grandmothers and children. People share everything they can. Medicine is divided to help the sick.

By car, Ukrainians try to break into Kyiv, Vinnytsia or Lviv. However, the Russian army shoots at cars. A dozen vehicles from the village of Krasne (Mykhailivska Rubezhivka) decide they’re going to break through the occupation ring. Less than an hour after embarkation, the women (mostly elderly) and children return.

Upon their return, not everyone is able to speak. Petrified faces and trembling hands, their mouths are paralysed by shock. The women seize up in panic attacks. The good Dr. Oksana runs from house to house and from car to car, to help those suffering.

A convoy of 10 cars tries to break through the occupation ring. All are fired upon. A total of 6 cars return. Among the survivors, 2 women are hurt (one with serious injuries). Two people are killed and brought back to the village. Their bodies remain in the garage in the village.

We decide to escape. The night before, NATO experts, Ukrainian politicians, foreign diplomats, Irpin volunteers, relatives and friends promise to come after us in an armoured personnel carrier or tank to help, but no one takes the risk. “You can only save yourself,” they say.

We leave in the morning. We are lucky. We are not fired upon. Twenty-three cars escape, but another 40 people remain.

My husband and I pack up in Kyiv and I leave for Lviv. I really don’t want to go, but he says, “Now you are only disturbing the men here by staying. We will do more knowing you are safe.”

My daughter, the cat and my friend’s daughter (my friend is with the Armed Forces of Ukraine) cross the Polish border on foot. We are officially in Spain, safe now as refugees.

I knew war was on the horizon from the moment I worked with the former President of Ukraine Viktor Yuschenko, who was poisoned by Russian Special Services during the election campaign period in late 2004.

For two months before the war started, the Western and Russian media spoke of it continuously, but somehow, we had gotten used to living with the threat of another impending war in Ukraine over the last eight years (since 2014). We didn’t believe that Putin would really invade Ukraine so aggressively; it just didn’t seem possible.

Just like it’s now impossible to believe the absolute terror that Putin’s troops have rained upon Ukrainian land. The photos from Bucha cement this disbelief alone. Looking at them; the mass graves, the bombed houses and the survivors crying over their dead, is frightening. The whole world has seen these atrocities and I am a firsthand witness to these crimes against humanity. Putin and his troops must be brought to justice.

Ukraine didn’t have time to prepare for this invasion. We are a young, competitive democracy; we are only 30 years old. We have spent this time fleeing Russia, trying to shake this misguided notion that we are somehow, their property. As we defend our land, we are grateful to the rest of the world and to those who help us. We will be grateful forever.

But ask yourself: is it really possible to ever be ready for this level of terror? To be prepared for this onslaught?

We are a strong and incredible nation, and I hope that the whole world can see this now. Our army is pushing back on Putin’s forces in a way that no one could’ve believed or anticipated. No one believed that Ukraine would still be standing since the first days of the invasion. President Zelenskyy was asked to give up or flee the country immediately. But he refused. For to abandon his country would be akin to killing a part of him.

Ukrainians are fascinated with Zelenskyy’s courage and empathy for his citizens. By the admission of many, he’s fast become the most capable leader of Ukraine. As a country and as its citizens, we stand firmly behind him. For he makes us feel as though with him, even the impossible is possible. We may be starving and suffering, but we will still fight for the sovereignty of our land.

Me, my daughter and my friend’s daughter are now in Spain. I work passionately every day (without weekends) on four charity projects. The girls help me when they have the time and energy to do so.

After the events near Bucha, my daughter has developed Post Traumatic Stress Disorder, but she’s coping as we all are. We flew to Spain with help from the non-for-profit organisation FBN International—the world’s leading organisation of business families who brings together over 17,000 individual members and 4,000 business families to enable them to thrive and transform family business models in the economy. I am currently the CEO of FBN’s Ukraine chapter. As there were already 3 families from our association living in Calpe, they swifly rented our current flat for me, where we’ve stayed since 19 March with the girls and our cat. My husband remains in Kyiv to help the military.

All of us, my family, my friends and my colleagues (whether they are involved in the political or business landscapes) are fully aware of how tough these next days will be and even after the dust settles.

We don’t know yet, how many losses we will suffer or how many territories Putin and his army will steal from us. We don’t know at which stage of war we will no longer feel terror, or live in the nightmare of a genocide that won’t end for us.

But what I do know for sure, is that I will give all I have to win. I will fight in my own frontline until the end of time; I will do everything possible and impossible, to make my country greater than it was before. I will do it.

I believe that the International Court of Justice awaits Putin and his Russian troops—the greatest punishment of global dishonour there is.

I believe in him being brought to justice. I believe and I know it will come true.