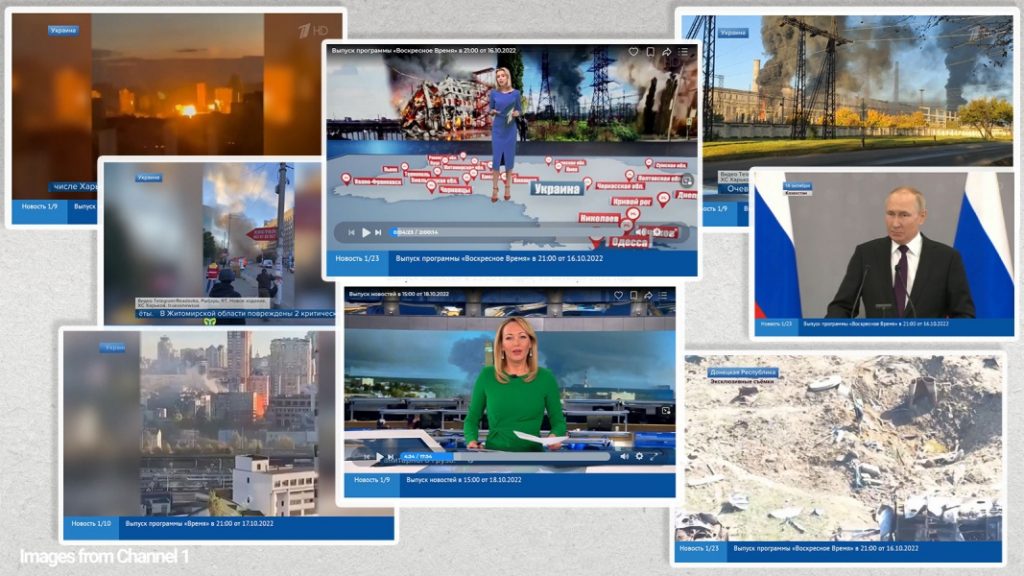 It has been almost eight months since Russia began its full-scale invasion of Ukraine. The war has gone through different phases on the battlefield: from Kremlin self-confidence and certainty of a quick victory to Putin ruling out mobilisation and dismissing public anxiety of being dragged into the quagmire, and now to a grinding war eating conscripts used as cannon fodder, informs EU vs Disinformation.

Mobilisation was announced and is not popular. Lately, we witnessed an explosion on the symbolic Kerch bridge to Crimea. Even Kremlin censorship and State-controlled outlets cannot suppress the tide of reports and testimonies with horrific reports of soldiers retreating at the frontlines or hundreds of thousands queuing at the border crossings and departing Russia to avoid mobilisation.

Do your job – ensure public support

Task number 1 for Russian state outlets (some call them media – but that is unfair toward the many independent journalists and credible media outlets) is to play their part in ensuring the Kremlin’s grip on society and control of the situation. Just consult the thinking behind the ‘Gerasimov Doctrine’: in times of modern conflict, all – ALL – entities at the disposal of the state must be loyal and engaged in the conflict. Not only a whole-of-government approach but an all-state effort. Further, with Russian censorship laws in place, state outlets are now even more tuned to playing their part.

While Ukrainian citizens have suffered through months of Russian shelling, they have nonetheless stood up to defend their country. Russian ground forces are on the defensive and the Kremlin has resorted to hurling missiles and kamikaze drones from a safe distance towards cities and civilian targets all over Ukraine.

This week has seen continued manipulation of news regarding these drone and missile strikes. The mainstream outlets highlight the goal of making targets of all of Ukraine’s infrastructure and energy systems. A peculiar smile often appears on the faces of TV hosts presenting  the strikes, as if they derive a perverse joy from inflicting pain on their neighbouring country.

At the same time that outlets report that the ‘good and rightful’ strikes on Ukraine are ‘only targets of a strategic or military nature’, Ukrainian strikes on Russian targets are labelled as ‘terrorism’. 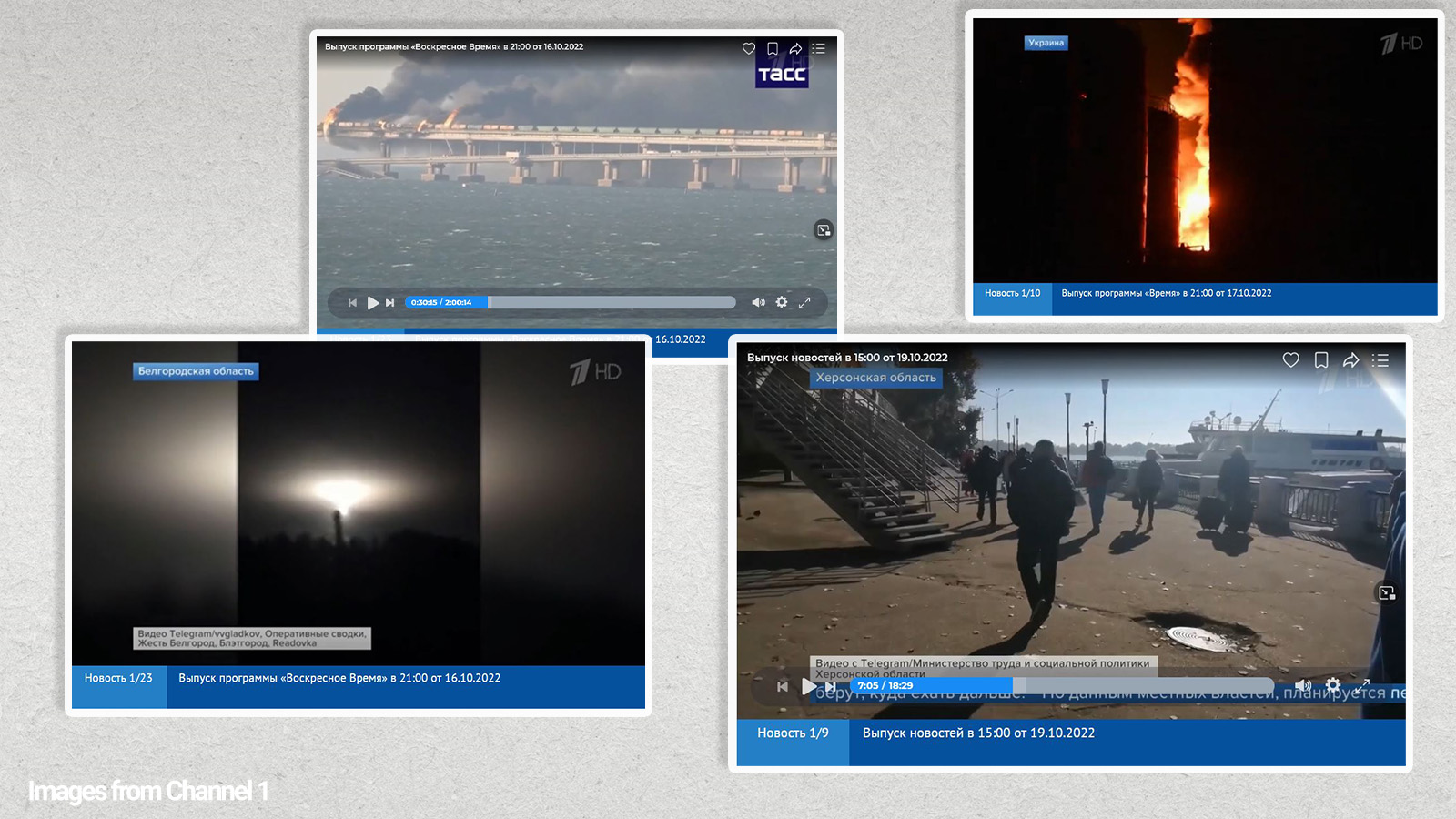 Turn the mobilisation into success!

Simultaneously, Russian state and pro-Kremlin outlets are storifying the mobilisation as a success and filling the information space with heavy doses of macho images, busy training, and smiling soldiers in Donbas. In what looks like an effort to manage a crisis and minimise damage to public support, Putin announced that the mobilisation will soon end. In Moscow, where the public atmosphere froze cold with the announcement of mobilisation and people in large numbers avoided contact with the authorities, the mayor claimed ‘quotas had already been filled’. Problem solved.

In state media, silence prevails about the prolific reports of insufficient equipment or absent training which circulated on, for example, the Telegram platform. Authorities have apparently taken to heart previous criticism from hot-heads and ‘war-party’ members like Solovyev who have now lowered the criticism and turned to recognition of measures. 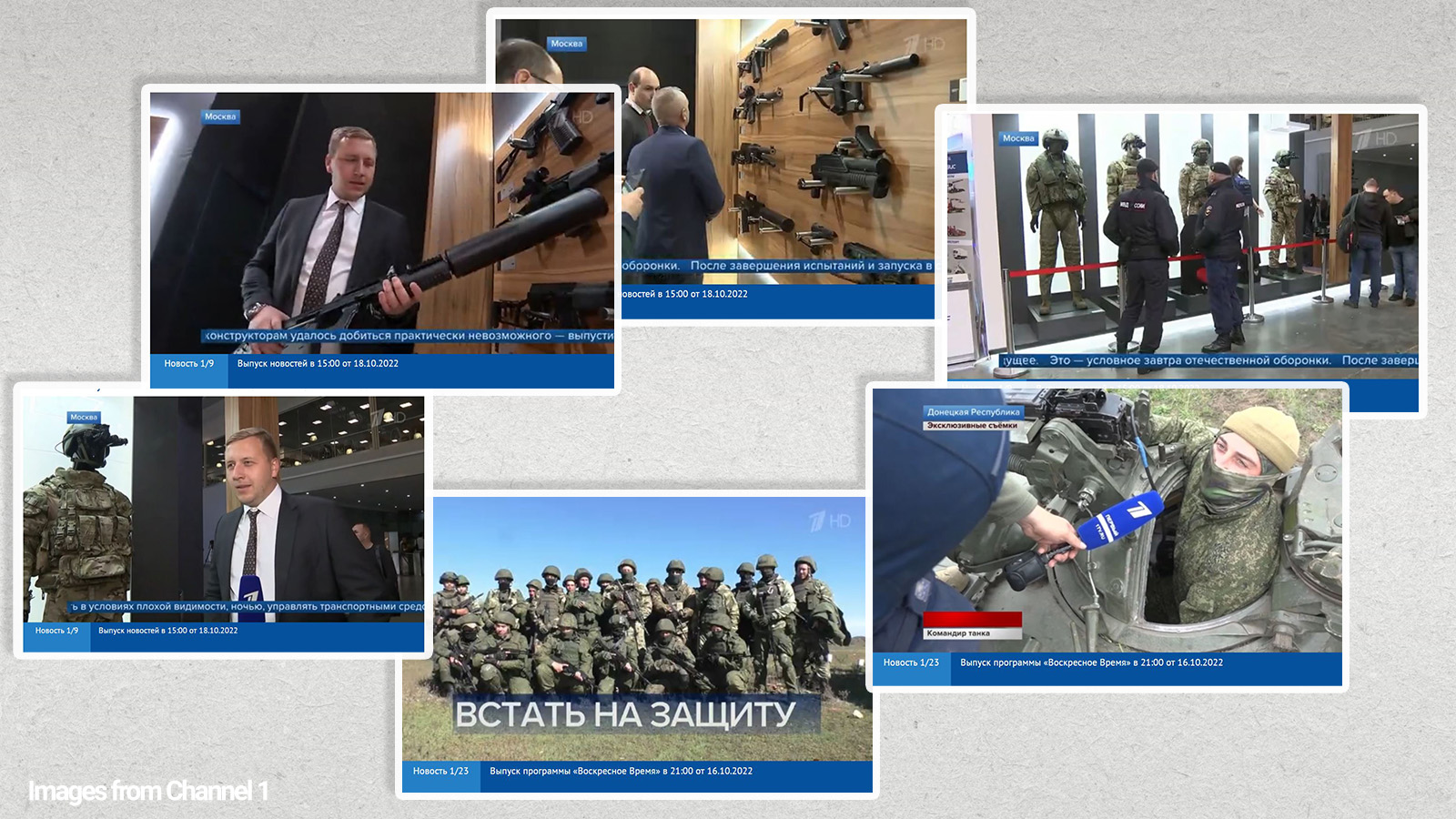 War is a hell of a drug

Said by many, this short sentence captures the psychological effect conflict and battle have on many people. Russian state outlets are filled with pictures and stories of firing artillery and blasting rockets. This fascination with weapons is not new, but all of Russian society is becoming even more militarised. Now it serves to brush away the shame of front-line military difficulties.

At this time, the Russian front around Kherson is under more pressure. On 19 October, Putin introduced martial law  in the four newly, let’s remember: illegally annexed Ukrainian regions, and civilians in the Russian-occupied part are reported to be preparing to be evacuated to Russia. Expect more reports of so-called ‘filtration camps’ with maltreatment inside Russia.

These horrific developments, launched by Putin and Russia itself, are wrapped in language and attitudes blessing the war. But as EU High Representative Josep Borrell wrote recently:

“..the principal issue before us Europeans is Russia’s aggression against Ukrainian sovereignty and international law. It is positive that the overwhelming majority in the UN General Assembly so clearly condemned Russia’s actions last week [missile and drone attacks]. This shows there are many around the world who want a rules-based system, not one governed by a “might makes right” attitude.”