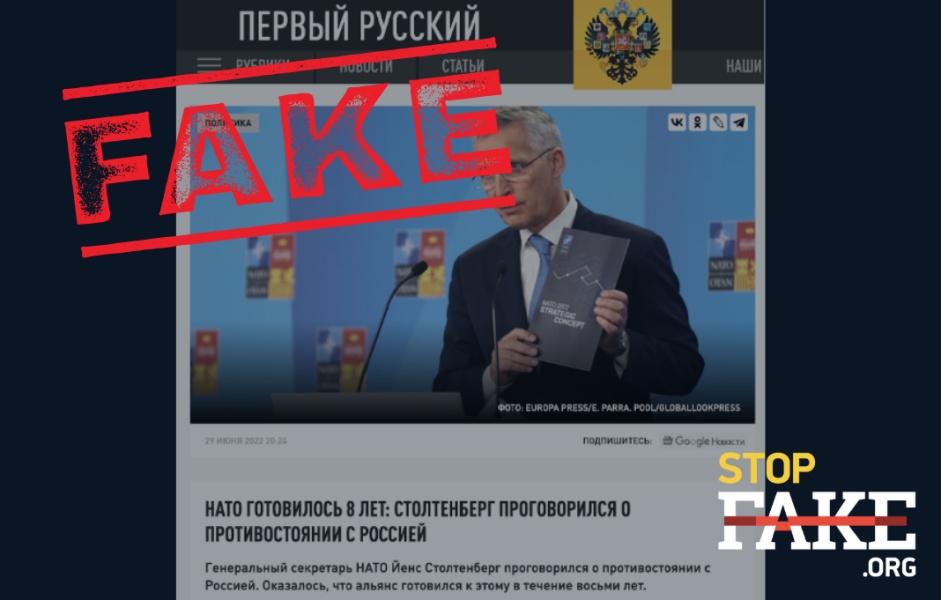 Russian media spread information that NATO Secretary General Jens Stoltenberg allegedly let slip out that the North Atlantic Alliance had been deliberately preparing for war with Russia for eight years. Such statements, according to the Russians, indicate that the military alliance really threatens Russia.

“NATO has been preparing for this for a long time. It’s not as if NATO suddenly woke up on the 24th of February and realized that Russia was dangerous. The reality is that we also have been preparing for this since 2014,” he clarified, adding that NATO has strengthened its military presence in the east of the Alliance and began to invest more money in defenсe. He also commented statements about increasing the number of NATO’s Response Forces from 40 to 300 thousand. “NATO has so far only agreed on a scheme for creating a Response Forces of 300 thousand people, the Alliance’s countries still have to fill it,” Stoltenberg told reporters. Earlier, on June 29, it was reported that NATO member countries were actively increasing their military spending — in total over the past 8 years they have reached 350 billion US dollars.

In fact, such disinformation messages are yet another attempt to justify Russia’s large-scale invasion of Ukraine. Stoltenberg did not say anything about the eight-year preparation for a war with Russia, or about any NATO plans to allegedly attack the Russian Federation. The NATO Secretary General reflected on the principles of European security, which the Kremlin destroyed in 2014 by starting the occupation of the Ukrainian Crimea and seizing parts of the Luhansk and Donetsk regions. The Russian media, in order to create another news about NATO aggression against Russia, resorted to standard methods of manipulating facts. The statements of the NATO Secretary General were not only taken out of context, but also supplemented his quote with their own words to justify the actions of the Russian military and escalate the situation. Stoltenberg said that after the Russian attack on Ukraine eight years ago, the Alliance has begun to strengthen its defence, given the expansionist ambitions of Russia. “When the world starts to change, NATO has to change too, ” Stoltenberg stressed.

He also stressed that NATO had in fact been preparing for a large-scale Russian invasion of Ukraine for a long time. Separately, during the Madrid summit, Stoltenberg once again denied the Russian narrative about the Alliance’s intentions to allegedly attack Russia. NATO Secretary General stressed that the Alliance would continue financial and military support to Ukraine, increasing its ability to repel Russian aggression. Stoltenberg also noted that NATO is not a party to the conflict in the Russian war against Ukraine.

NATO has repeatedly noted that the course of the Alliance is in no way directed either against Russia or against any other state. The leadership of the Alliance dozens of times drew the attention of the Russian authorities to the fact that the goals of NATO are set out in the preamble of the Washington Treaty of 1949 and the main mission of NATO is not to unleash a war, as Russian media and officials claim, but the stability of the participating countries and their defence in case of conflict, but no attack. Unlike Russia, which deliberately resolves military conflicts on the territory of other countries, as happened in the case of Ukraine.

It was Russia’s aggression against Ukraine in 2014 that became the impetus for the revision of NATO’s collective security standards. After the Russian attack on Ukraine in 2014, the Alliance responded by strengthening its presence on the eastern flank, with the Allies establishing four multinational battalion-size battlegroups in Estonia, Latvia, Lithuania and Poland. After the start of Russia’s large-scale