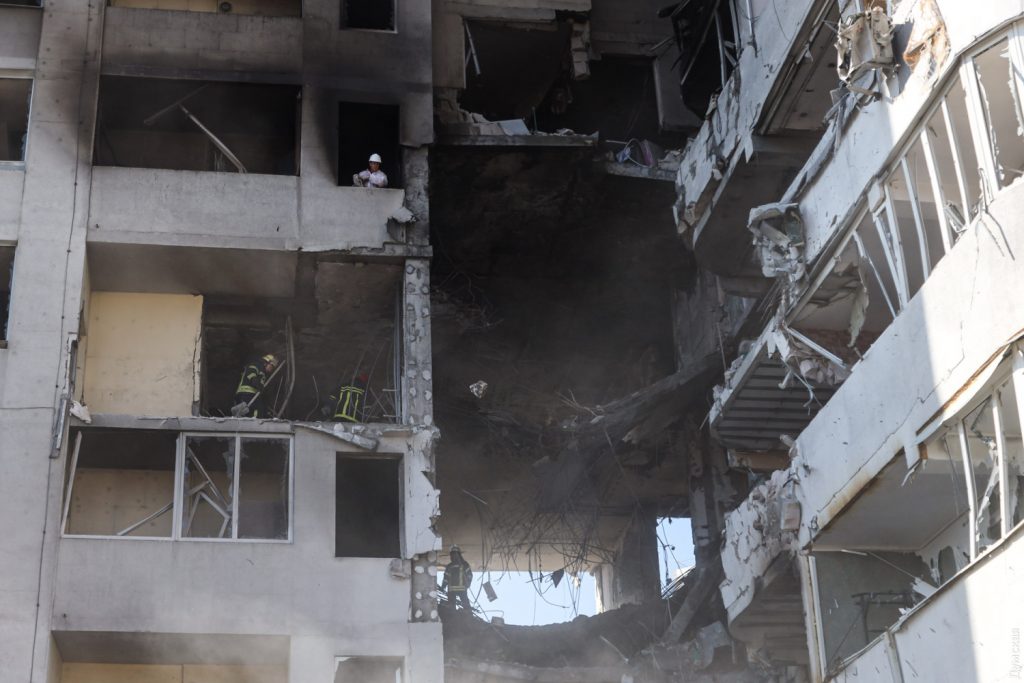 Russian military continues to use terrorist methods of oppression of Ukrainians in the occupied territories and to spread fakes about the willingness of Ukrainian citizens there to join Russian forces, reports Zaporizhzhia Regional Military Administration.

Russia might have used tear gas mixed with chemicals in Mariupol, the Permanent Representative of the US to the OSCE Michael Carpenter said during a special meeting of the OSCE Permanent Council.

“We are currently investigating reports that Russian troops used chemicals during the attack on Mariupol. There is credible evidence that Russian troops may have used various means to counter the riots, including tear gas mixed with chemicals that could cause more severe symptoms to weaken and disable Ukrainian fighters and civilians as part of their aggressive campaign to capture Mariupol”

According to the General Staff of the Armed Forces, units of the 64th separate motorized rifle brigade of the Russian Federation, which took “active part in mass killings, torture and rape of civilians in the Ukrainian city of Bucha”, are now operating in the village of Izyum in Kharkiv region and have already suffered casualties.

Deputy Prime Minister Iryna Vereshchuk said that evacuating around 100 thousand people who remained in Mariupol, will be possible only with the help of the UN.

“Evacuation is possible only with the assistance of the United Nations. The organization and Guterres must join the efforts and organize corridors,” she said.

Vereshchuk also added: “We do not have time to wait. These corridors need to be arranged in the next few days.”

On April 22, Russian troops shelled housing infrastructure of Luhansk region 12 times. Popasna suffered the most – 5 artillery attacks were launched on the city yesterday. Two civilians were killed and one was injured as the result of the shelling, reports Head of the Luhansk Regional Military Administration Serhiy Haidai. As of the morning of April 22, as a result of a full-scale Russian war in Ukraine, 387 children have been injured and 208 have died, reports the Prosecutor General’s Office.

As a result of the bombings and shelling, 1,500 educational institutions were damaged, of which 102 were completely destroyed.

In Bucha, Kyiv region, the collection and exhumation of the bodies of those killed during the temporary Russian occupation is coming to an end. So far, 412 people have been identified, Mayor Anatoliy Fedoruk says.

“We found those who were killed, shot and tortured by the invaders, we found charred bodies of civilians. Among them are hospital patients who could not be buried after February 24 because Russians did not allow the funeral service to enter the cemetery. Among them are several young men from the Armed Forces,” Fedoruk wrote.

In Mariupol, the invaders are clearing the rubble of the Drama Theater, the bodies of the dead are being taken to Mangush, the adviser to the Mayor of Mariupol Petro Andryushchenko reports.

“In the process of cleansing, the invaders are packing the bodies of the dead into plastic bags, and moving them to a storage facility in the industrial zone near Nikolsky highway with the use of tractors and trucks. Then, when filled, they take them out to Mangush, and dump them in a 300-meter trench,” Andryushchenko wrote.

The Minister for Reintegration of the Temporarily Occupied Territories of Ukraine said that the Russian invaders  “may try to organize their own corridor for evacuation to Russia in parallel with us.”

“So, please be careful and vigilant. Do not succumb to deception and provocation. Our corridor works exclusively in the direction of Zaporizhzhia (via Mangush, Berdyansk, Tokmak, Orikhiv),” she stressed.

Dnipro territorial defense repulsed the offensive of Russian troops and captured enemy weapons, including an AK-12,a new ATGM and an old but well-functioning 120-mm mortar. In the evening of April 22, Chernihiv border guards positions were shelled by Russia.  About ten grenades fired from an automatic grenade launcher exploded near the village of Senkivka.  Fortunately, none of the border guards was injured.  This is the fourth time the shelling from Russian territory was recorded after the Russians were pushed back there.

A missile strike was carried out on Odesa. Some infrastructure objects were hit. The danger did not subside yet, stated the Operational Command “South”.

They both played Lucy in “ The Lion, the Witch, and the Wardrobe” play, based upon the eponymous book of “The Chronicles of Narnia” series.

Mariupol Deputy Mayor Andryushchenko expressed his condolences to their family and wrote that Ukraine will never forget the talented angels and will never forgive the occupiers. As a result of an artillery attack on Zolote settlement, two people were killed and two were wounded.

At approximately 3 p.m., the Russians opened fire on downtown Zolote.

Missile strike on Odesa: further information has been published

Two enemy cruise missiles (tentatively X555 or X101), which struck the city of Odesa and 2 UAVs of operational and tactical levels were destroyed, two more hit a military facility and two apartment buildings.

The Russians disrupted the evacuation from Mariupol by threatening to begin a shelling.

At 11 o’clock, at least 200 Mariupol residents gathered near the “Port City” shopping center, waiting to be evacuated to Zaporizhzhia.

But instead of the buses that the Russian side promised to give, the Russian military drove up to Mariupol residents and ordered them to leave, saying that a shelling was about to start. People left.

However, the invaders brought buses to a point near the Metro shopping center (200 meters from the agreed evacuation point) and began boarding people to be taken to occupied Dokuchaievsk, announced the Deputy Mayor of Mariupol Petro Andriushchenko.

The fire in a high-rise building in Odesa, which was hit by Russian cruise missile, was extinguished.  The number of victims increased to 6.

On April 23, at 2:35 p.m., enemy munition hit a sixteen-story apartment building, which caught on fire on the 4th and 5th floors.

It is currently known that 6 people died, including 1 child. 18 people were injured.  2 were rescued from the rubble, 86 were evacuated.  96 people and 18 units of equipment were involved from State Emergency Service of Ukraine, rescuers and doctors continue to work on the site. Kharkiv military administration confirmed that six civilians were wounded due to the shelling by Russian occupiers and that three were killed near Chuhuiv and Derhachiv.

As a result of the attacks on the village of Atynske, all windows and doors in the psychoneurological institution for children were blown out.  There are no casualties.

Additionally, in the village of Boyaro-Lezhachi the territories of private houses were damaged, but there also are no casualties, announced the head of the Sumy Regional Military Administration Dmytro Zhyvytskyy.