After four months of Russia’s full-scale military invasion of Ukraine, the Kremlin began to realize the scale of the impending catastrophe of military defeat and, as a consequence, the political collapse of Putin’s regime.  There is no doubt now that Putin was planning a war with the entire West. Ukraine was only the first stage of this war.

By starting the war, Putin was convinced that Ukraine would not be able to resist his army properly, and the West would not support Ukraine — he could not consolidate in repelling Russian aggression and limit himself to symbolic sanctions.

This will give Putin the opportunity to take over all of Eastern Europe.

The Kremlin maniac miscalculated, and this led to a strategic mistake — the decision to start a war.

Ukraine has survived. The Ukrainian army and people of Ukraine have shown unparalleled courage, steadfastness and heroism in defending their freedom and independence. The Armed Forces of Ukraine have inflicted a number of heavy defeats on the aggressor. Victory is still far away, but there is no doubt about the victory of Ukraine over the empire of evil and lies.

As of today, it has become obvious to most leaders of the civilized world that Putin’s aggression is aimed not only at Ukraine, but at the whole of Europe. It is abundantly clear to all sensible people that Ukraine protects, without exaggeration, the entire Western civilization from the attack of barbaric Russia.

The West has rallied in the face of a common threat. Ukraine’s support is unanimous. The West’s determination to punish and weaken Russia is stronger than ever. The imposed sanctions, which turned out to be really tough and effective, will undoubtedly lead to the collapse of the Russian economy and the end of the Russian Federation in its present form.

All this became a surprise for Moscow and made the Kremlin think about the need to take measures to save the situation.

In these circumstances, Putin and his entourage are feverishly seeking ways to ease Western pressure and reduce the destructive effects of sanctions.

Defeat by the hands of the Ukrainian army and involvement in a protracted war was not a part of Putin’s plans. That is why the Kremlin is scrambling to find a way out of the situation and does not always know where to look for it. They are chaotically seizing on every opportunity to postpone the inevitable catastrophe.

A crucial role in the Kremlin’s strategy to weaken the West’s political, military and economic pressure on Russia is played by Russian agents of influence, as well as the Kremlin’s «useful» idiots in the European Union and the United States.

Through them, the Kremlin is creating divisions in the Western community and misleading Western public opinion.

Through them, the Kremlin spreads lies and disinformation of Russian state propaganda in Western countries and forms false narratives.

Against the backdrop of imminent military and political catastrophe, the Kremlin has deployed all of its influence agents in the world at total capacity. Moscow is demanding active action from its agents despite the costs and losses. This has already led to the revelation of many of Russia’s agents of influence in the world. Among them are many agents of Moscow’s influence whom the Kremlin has been saving for strategic tasks.

Now, the Russian security services are ruthlessly wasting them on short-term, tactical tasks, the benefits of which are far from being always obvious. This reveals panic and irritation in the Kremlin.

In recent months, many of Moscow’s agents of influence in the world have flashed about in feverish attempts to save their masters. In a short time, we have uncovered a large number of Russian agents of influence that we previously could not have thought of as working in the interests of the Kremlin.

There have been many articles in the press about the inexplicable love of some Cypriot officials and politicians for Russia, to the detriment of their own country’s interests. An example, and definitely not the only one, is the case of the Deputy Attorney General of the Republic of Cyprus, Eleni Loizidou.

Lately, we have seen Russian agents of influence trying to convince public opinion that sanctions against Russia are unfair and ineffective. They try to convince the Western public that the sanctions are ineffective and only harm the economy of the European Union.

For this purpose, methods of influencing public opinion have been used since long ago by the Soviet special services, such as:

— Media publications of an alarmist nature by marionette economists and journalists,

This activity aims to initiate a debate in public and political circles in the country about the pointlessness and futility of the sanctions, leading to doubts about the advisability of supporting them.

The main narrative currently being promoted by Russian agents in the Republic of Cyprus is that Russia cannot be isolated in the international arena, that sanctions are detrimental primarily to Western countries, which cannot find alternatives to Russian energy resources, and that the sanctions are neither fair nor legitimate.

Such discussions form a split in society, in the political elites in Cyprus and in the European Union as a whole, which undermines the unity of the West in terms of sanctions and defence against the Russian threat.

A few days ago, the former Minister of Justice of Cyprus, Emily Yiolitis, made a statement at a little-known Wealth and Succession Planning conference that was immediately picked up and replicated by the Russian state-run so-called media.

«The imposition of sanctions, their effect and even their legitimacy have proved more illusory than initially thought. At best, sanctions are ineffective and have done little to combat the illegality of the invasion. At worst, they work not only against the economies of the states that impose them but also against the rule of law that democracy seeks to uphold.»

«The sanctions began as targeted measures against specific banks and prominent oligarchs close to Putin, today we see them being implemented by member states indiscriminately against all Russian citizens.»

«The sixth package of sanctions is almost an admission that we have gone too far.»

«The ploy is to confiscate the frozen property of sanctioned Russian individuals and use those proceeds to rebuild Ukraine.  There is even a proposal to seize US assets of the Central Bank of Russia.  But who is considering the legal implications of these proposals and how they could serve as a double-edged sword, undermining the rule of law of Western democracies while they claim to maintain international order.»

«We cannot seize assets, including state assets, and liquidate them without considering that we could set a dangerous precedent for world order.»

«This reminds me of a poem by German Pastor Martin Niemöller from 1946.  It is about the silence of German intellectuals in the face of a gradual purge of chosen goals.»

«First they came for the socialists, and I remained silent —

Because I was not a socialist.

Then they came for the trade unionists and I said nothing —

Because I wasn’t a trade unionist.

Then they came for the Jews, I didn’t say anything —

Because I wasn’t Jewish.

Then they came for me — and there was no one left to stand up for me.»

If you don’t know that the author of these remarks is an ex-Minister of Justice of Cyprus, you would think that this is coming from a Russian staff propagandist who is paid by the Kremlin to do this.

The speech of Emily Yiolitis contains all the main narratives of the Russian state propaganda and the complete substitution of concepts. Ms Yiolitis is a defender of Putin’s criminal regime, his supporters and the terrorist state called Russia. 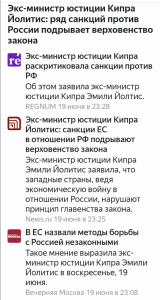 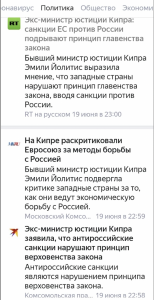 Knowing how the Russian state propaganda machine works, we can firmly assert — the speech of Ms Yiolitis was known in advance in Moscow, coordinated with people from special services and Russian state’s so-called media received an order to immediately duplicate it on their pages, referencing the Cypriot media. There can be no doubt about it.

It is difficult to give a more valuable gift to the Kremlin and the Russian state propaganda.

At first glance, these statements do not fit well with Ms Yiolitis’ brilliant legal background and excellent professional reputation. It is hard to imagine that she is not versed in international law and does not know how and why sanctions were imposed on Russia. As a professional lawyer, she cannot fail to know that the sanctions have been imposed on Russia for obvious crimes, and have been done so in compliance with all necessary legal procedures and full compliance with international law. Emily Yiolitis ignored these facts and acted as a devil’s advocate.

It is difficult to imagine that Emily Yiolitis is a «useful» idiot of Moscow, of which, unfortunately, there are many in the Republic of Cyprus. She is too smart and well-educated for that.

That leaves only one thing — Emily Yiolitis is acting in the interests of Russia, driven by personal interests, or following someone else’s order. The former does not rule out the latter.

The explanation for her strange behaviour may lie in her carefully hidden ties with Moscow.

According to our sources in Moscow who understandably wish to remain anonymous, Emily Yiolitis is closely related to Cypriot companies providing corporate, legal, trust and fiduciary services to Russian clients, companies and individuals. Most of these clients have fallen under US and EU sanctions or are associated with those who have fallen under these sanctions.

These allegedly include people from Putin’s inner circle, members of the Russian government, high-ranking officers of the Russian secret services and leaders of criminal networks and companies under their control.

Also, according to our sources, Emily Yiolitis manages the operations of some of these companies and provides services to Russian clients through an office in Moscow.

The main activities of the companies with which Emily Yiolitis is allegedly associated are laundering and holding Russian criminal money offshore.

If our sources’ information is reliable, then everything becomes very clear and understandable.

Perhaps the ties to Russia have had a destructive effect on the outlook of Ms Yiolitis. And also on the legal assessment of the West’s actions against Russia and its crimes.

However, no matter what kind of guidance Emily Yiolitis has in promoting Russian interests to the detriment of the unity of the civilized world in its desire to protect both Ukraine and itself from the aggression of barbaric Russia, her actions have clear signs of working as an agent of Russian influence to the detriment of her own country and the European Union as a whole.

Taking into account possible connections of Ms Yiolitis with Russia, as well as the immediate and coordinated reaction of Russian propaganda to her speech, it is safe to assume that her speech at the conference was a classic special operation of Russian secret services to misinform and disorient the Western public opinion.

We have seen many such special operations of the Russian security services in the Republic of Cyprus in recent years. We will tell you more about them.

Ms Yiolitis concluded her speech with a poem by Martin Niemöller.  A greater vulgarity could not have been imagined. It looked horrible and disgusting.

The Russian army is destroying Ukrainian cities. Russian soldiers are raping Ukrainian women and children. Tens of thousands of Ukrainians have been murdered on Putin’s orders. Millions have lost their homes and became refugees.

Articles on the topic:

Putin is a war criminal, Russia’s Hitler. Russia is a fascist, terrorist state.

And all accomplices in the crimes of Russia and Putin will be held accountable.