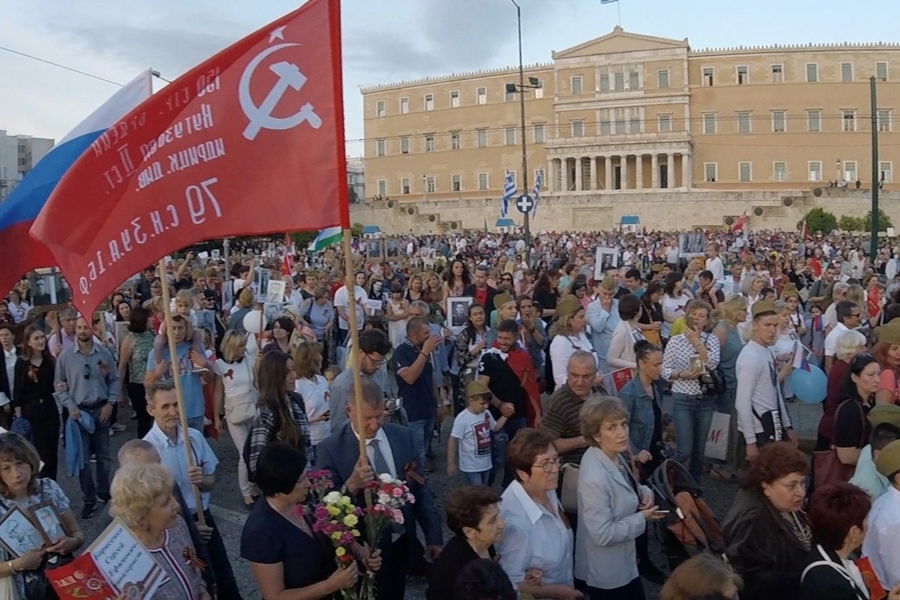 While European governments are pondering on whether to further tighten sanction against Russia or not, the latter carries on destabilizing Europe by inciting new conflicts and tightening its grip on these very governments. Greece has been chosen as the next destabilization target, according to the “Informational Resistance” (IR) that has recently published an article titled “Pontius Separatism: How the RF is destabilizing Greece”

In the last few years, various media outlets have been covering Kremlin’s attempts to sway the situation in Greece. Most notorious cases include suspicions of Russian secret services’ in attempts to influence the Macedonia renaming referendum’s outcome, as well as Russian interference with Greece’s internal affairs aided and covered by the Imperial Orthodox Palestine Society.

Why has “brotherly” Orthodox Greece become a target of this new destabilizing attack?

According to IR, all this had started long before the change of government in Greece in summer of 2019, when it had become known that the Greek-backed Ecumenical Patriarchate was planning to recognize the Orthodox Church of Ukraine (OCU).

It was then when Russia’s first attempts to block OCU recognition processes through its high-profile supporters and lobbyists were registered.

Panos Kammenos, ex-minister of national defense of Greece (2015 – 2019) and founder of the “Independent Greeks’ Party has called Hieronimus, the Archbishop of Athens, and the entire Church’s hierarchy none other than “criminals”, according to the Greek ‘Orthodox Times’ portal.

In ex-minister’s opinion, OCU’s recognition by the Church of Greece jeopardizes the Greece – Russia union where Moscow is a guaranteed factor of stability and protection from Turkey.

Ivan Savvidi, an Orthodox Russian oligarch of Greek background and Kammenos’ partner in the government coalition, has also tried whatever in his power to influence the granting of the Tomos to the OCU.

Savvidi even met with the Ecumenical Patriarch Bartholomew in Constantinople in May of 2018. According to unofficial reports, he tried, during that meeting, to persuade the Patriarch of Constantinople to change his mind and drop the official recognition and granting of the Tomos to the Orthodox Church of Ukraine, but to no avail.

Despite all this effort, the Ukrainian autocephaly was recognized, with the Church of Greece being among the first to recognize the OCU.

According to IR, the media controlled by Russian oligarch Ivan Savvidi and coordinated by Vassily Gavrilov, press-attaché of the Russian Embassy in Greece, subsequently held a defamation campaign against Ecumenical  Patriarch Bartholomew and the Church of Greece’s hierarchy.

By the way, Russian agents in Cyprus also partook in these processes, heavily contributing to Bartholomew’s and Church of Greece’s defamation.

For instance, Alexey Voloboyev, founder and then president of EGO O POLITIS, Cyprus’ Russian party, published a statement on his Facebook page to the effect that he did not anymore consider the Ecumenical Patriarchate to be canonical and a Church of Christ, calling Patriarch Bartholomew and the Church’s hierarchy douchebags. 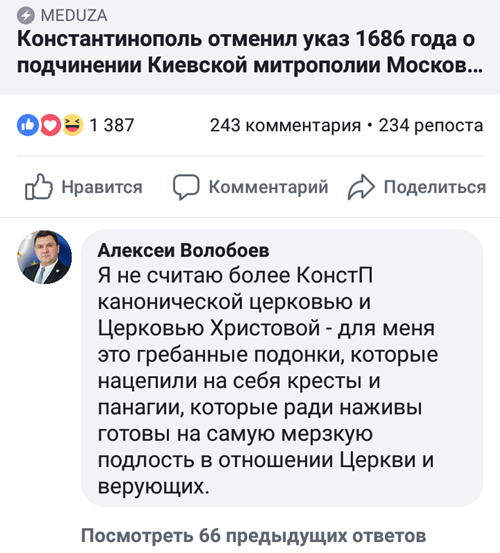 This “politician” has been joined by other Russian agents of influence in the defamation campaign against the Church of Greece, with all these activities coordinated by the Russian Embassy in Nicosia.

As we mentioned earlier in our articles about the Russian party of Cyprus, the EOP party is planning to get a couple of seats in the Cypriot Parliament at the 2021 parliamentary election without having electorate.

EOP is planning to attain this goal by manipulations, bribing of voters, political crockery, using of course Russian Government’s and Presidential Administration’s resources.

We also mentioned that to get votes the EOP is planning to employ a method of consolidated voting by ethnical groups. In this case we are talking about attracting votes of the sizeable Cypriot Pontius Greeks’ community.

Moscow has apparently started preparing a scenario similar to that implemented in Abkhazia, Ossetia and Donbass.

Last autumn “Russkie Afiny’ (Russian Athens), a Russian-language website controlled by Ivan Savvidi, published as open letter by Valida Boudakidou, an author and political writer residing in Thessaloniki, titled “Never shall we become… Ellines”, to Ivan Savvidi as a coordinator of the Council of Greeks Living Abroad.

That open letter looked weird by itself, to say the least: a person on Ivan Savvidi’s payroll was addressing him via a resource belonging to Savvidi, calling him not to conceal the facts of Russian-speaking community’s discrimination in Greece. And those calls originated from the main organizer of “Immortal Platoon’, a Russian propaganda march.

According to IR, “Boudakidou’s address is a signal for Greece that Russia has started the implementation of an old-new Balkans’ destabilization project.”

This is bringing to mind the scenario implemented earlier in Georgia and Ukraine. Once a government disloyal to Russia comes to power, a sizeable Russian-speaking community residing in a certain area (Pontius Greeks in the case of Greece) and in dissent with new government’s policies, suddenly surfaces.

People are being reminded, through public opinion leaders, that Pontius Greeks come from Russia, that their freedom and rights are suppressed by Greek authorities who deny the fact that the North of Greece belongs to none other than the Pontius, that the Pontius are not “Ellines” and therefore want their own autonomy with its center in Thessaloniki where Ivan Savvidi has great influence and where plenty of newcomers from ex-USSR countries reside.

This idea was publicly approved in the end of January by yet another public opinion leader Harlampios Politides, a member of the Diaspores’ Union of Russia who made a statement to the effect that “he would with a great satisfaction welcome Ivan Savvidi’s victory at the election as a head of government”.

And almost everything is ready for that.

To establish whether the Pontius are in fact not Greeks, Savvidi set up the Center of Pontius Studies in May of 2019, allocating in October of the same year Eur 47 000 for the establishment of a Russian language chair at the National University of Athens. He also funded a Russian language department in Thessaloniki and organized a number of joint Russian-Greek cultural, charity and Orthodox events. Moreover, in the end of 2019 he set up a new structure for repatriates from the ex-USSR, a counterbalance to the Federation of Greek Repatriates.

Here is what Gennady Melnik, Russia Today’s correspondent in Greece, has told to the Russian propaganda TV-channel Tsargrad:

“The Pontius diaspore in Greece holds Savvidi in the highest esteem. For instance, he bought an ailing tobacco factory in Northern Greece, having provided thus several hundreds of jobs for compatriots and locals (and there is no job there at all, as in many other places in Greece). He snatched it away from Turks who would’ve filled all the jobs with Turks or Albanians. It was appreciated in Greece.”

And then we were having an outcry incited by Savvidi-controlled media and NGOs about the rampant xenophobia in Greece with respect to Russians and repatriates from the ex-Soviet Union making it impossible for them to communicate in their native language.

Strangely, acts of civil disobedience by Savvidi-owned PAOK FC fans have become more frequent since the beginning of 2020.

All this is somehow reminiscent of the 2013 – 2014 events in Eastern Ukraine, and there are well-grounded concerns that Kremlin’s strategists are planning to organize something similar, in one form or another, also in Cyprus.