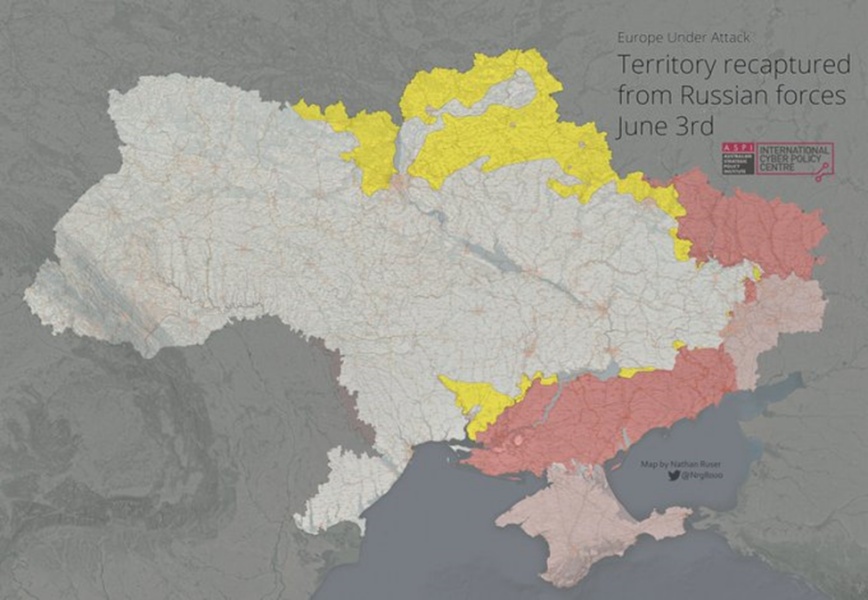 Russia has been preparing for the seizure of Ukraine for a long time, concentrating troops and the anti — Ukrainian sentiments among Russians, fueled by propaganda. After February 24, the myth of the «invincibility» of the Russian army, consisting mainly of looters, rapists and military soldiers who had never shot from an assault rifle, was broken. The Ukrainian army alone had managed to restrain the horde on Europe.

Almost all maps of the Russian-Ukrainian war indicate the lands held by Russia at the moment, and the territories retaken by Ukraine from the invaders are never shown. Large international media mainly display such a trend with any combat maps in Ukraine. Maps showing only Russian achievements (and often substantially exaggerated by Russian propaganda) create a false impression of Russian military successes and indirectly contribute to the Kremlin’s propaganda.

Russia had made some progress only in the Kherson region. The course of hostilities proved the complete discrepancy in the declared level of training of the Russian troops with the real level, and exposed monstrous corruption in the highest military echelons. The Russian army was shocked by fierce and stubborn resistance of the Armed Forces, as well as by complete rejection by the Ukrainians of the Russians, who were considered as killers and invaders. In addition, many military personnel of the army of the Russian Federation (in particular, military service soldiers) were simply deceived, they were sent «to the exercises.»

The Russian troops’ offensive was stiff only in the early days of the war, by the effect of surprise and the fact that no one believed to the end that Putin would decide on such a barbaric invasion. After March, 6, the Russian troops’ advance became insignificant. Over the same period, the Russian army suffered the biggest losses. If you look at a comparative analysis, during an offensive operations in March-May, Ukraine returned about 50 % of what was captured by the Russians in the first 10 days of the war, when Russia had the greatest success in Ukraine. The territory on the map, regained by Ukraine, marked with yellow.

The counterattack of the Armed Forces completely expelled Russian troops from the Kyiv, Chernihiv and Sumy regions, a significant part of the Kharkiv region and also liberated entire directions in Mykolaiv, Kherson and Zaporizhzhya regions. The Ukrainian army, independently and mainly with the old Soviet weapons, managed to cause complete tactical defeat by the Russians, exposing the actual weakness and unpreparedness of the Russian army, which is based exclusively on quantitative advanced. On the contrary, Ukrainians have proven themselves as brave and staunch warriors, the Ukrainian army is mobile and modern, that gained a lot of experience in 8 years of Russian aggression in the Donbas and showed the best during the full-scale invasion of the Russian Federation.

This despite the fact that the resource potential of Russia and Ukraine is not comparable, and the Russian army has much more weapons, but, lower that the Western analogues. Even a limited number of American MLRS Himars influenced significantly on the situation at the front, proving the primitiveness of the Russian army. If Ukraine had sufficient number of heavy weapons, the Armed Forces of Ukraine could have push back Russian troops without much difficulties and reach the borders of February 24, creating an effective security belt and the necessary defence capabilities from the Russian threat to Europe.