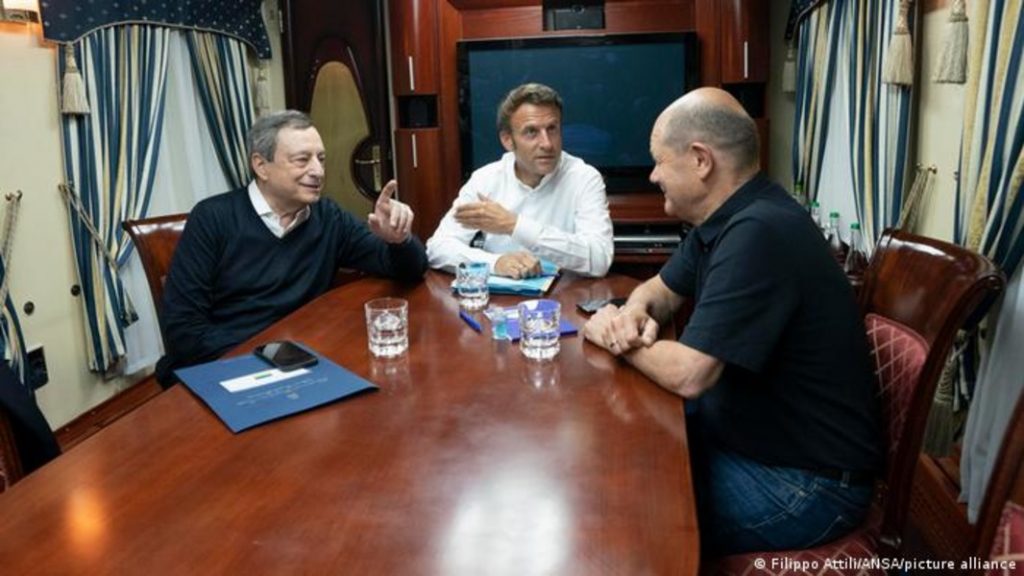 Scholz said the three leaders wanted «to show their support for Ukraine and the citizens of Ukraine.»

«But we don’t just want to demonstrate solidarity, we also want to assure that the help we organize — financial and humanitarian, but also when it comes to weapons — will be continued,» he said. Support will continue for as long as is necessary, he said.

The trio took an overnight train to Kyiv from Poland. They are expected to meet with Ukrainian President Volodymyr Zelenskyy.

Major German and Italian media outlets, including Germany’s ZDF and Italy’s Repubblica, had earlier published a photo of the three leaders on the train.

It is the first time the three travel to Kyiv since the war started in Ukraine.

There had been speculation earlier this week that Scholz would be part of the joint trip ahead of a G7 summit at the end of June.

The visit also comes a day before the European Commission is set to make a recommendation on Ukraine’s status as an EU candidate.

The three leaders have come under criticism over their response to the war. Critics say France and Germany, and, to a lesser extent, Italy, have been slow to deliver weapons to Ukraine. Scholz and Macron have also been criticized for maintaining contact with Russian President Vladimir Putin.

German minister: Weapons can be delivered to Ukraine by August

Kyiv has complained that weapons that Germany pledged to Ukraine were not delivered. Berlin says Ukrainian troops must first be trained to use them.

«The training on these multiple rocket launchers can begin at the end of June, meaning they can be delivered at the end of July or the start of August,» Lambrecht told reporters as she arrived for a second day of talks with her NATO counterparts in Brussels.

Former German Chancellor Gerhard Schröder has sent a letter to the Bundestag budget committee that challenges the decision to revoke his right to a parliamentary office.

Schröder was Germany’s chancellor from 1998 to 2005. After leaving office he was involved with Russian energy firms Gazprom and Rosneft. Since Moscow’s invasion of Ukraine, he has drawn criticism for his ties to Moscow.

In a letter to the committee’s chair, Schröder’s lawyer said that the former chancellor had learned «via the media» that his office was being «put on hold.»

The letter also argues that a resolution taken from the media is «evidently illegal and unconstitutional.»

Schröder’s lawyer said that he hopes for «the chance to reach a mutually acceptable settlement by way of conversation on an even playing field.»

Russian energy giant Gazprom has begun reducing the volume of gas it supplies to Germany via the Nord Stream 1 pipeline to a daily maximum of 67 million cubic meters early on Thursday.

Overall, the cut represents an approximate 60% reduction in gas supplies to Germany in just two days.

German Economy Minister Robert Habeck accused Moscow of attempting to create unease and increase gas prices. He added that it was still possible to source alternative gas supplies on the market, albeit at a high price.

Report: 2 US volunteers in Ukraine missing

The Telegraph newspaper cited an unnamed fellow fighter as saying that the two Americans were captured by Russian forces during a June 9 battle northeast of Kharkiv.

The two Americans are identified as Alexander Drueke and Andy Huynh, US military veterans who had been living in the state of Alabama.

White House spokesperson John Kirby said that he could not confirm the disappearance, but that «if it’s true, we’ll do everything we can to get them safely back home.»

Kirby went on to discourage Americans from volunteering to fight in Ukraine.

«It is a war zone. It is combat. And if you feel passionate about supporting Ukraine, there’s any number of other ways to do that that are safer and just as effective,» Kirby said.

David Arakhamia, Ukraine’s chief negotiator with Russia, said Russian people and companies are circumventing Western sanctions by making use of Georgian entities to do so.

He told a German Marshall Fund event in Washington that Russians are «heavily» using «Georgian banks, Georgian financial system, Georgian companies and so on,» to dodge the West’s sanctions regime.

«If you are a sanctioned Russian person, you go to the Internet, you open up a Georgian company, open up remotely the bank account and start processing,» Arakhamia added.

He also urged Washington to take action to close the loophole. 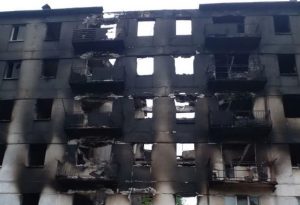 What happened in Russia’s invasion of Ukraine on Wednesday

Ukrainian President Volodymyr Zelenskyy said defending the Donbas region in eastern Ukraine was «vital» as the outcome would indicate «who will dominate in the coming weeks» of the war.

The United States will provide Ukraine with another $1 billion (€963 million) to help the country amid Russia’s assault in the eastern Donbas region. The latest boost of aid will include major weapons systems that the Ukrainian government has appealed for such as howitzers, anti-ship missile launchers and rounds for the High Mobility Artillery Rocket Systems.

The US will also send an additional $225 million in humanitarian aid to provide assistance for drinking water, food, shelter and other essential items.

Russia’s Defense Ministry said its missiles had destroyed a warehouse in the Lviv region, which was being used to store ammunition for weapons donated by NATO members.

Germany will only be able to deliver three instead of four planned rocket launchers to Ukraine, Defense Minister Christine Lambrecht said.

Turkish Foreign Minister Mevlut Cavusoglu said his country is ready to host four-way talks with the UN, Russia and Ukraine in order to unblock the passage of grain through the Black Sea.

A UN panel investigating possible human rights violations said they are collecting evidence, but that it is too early to say whether the allegations constitute war crimes.