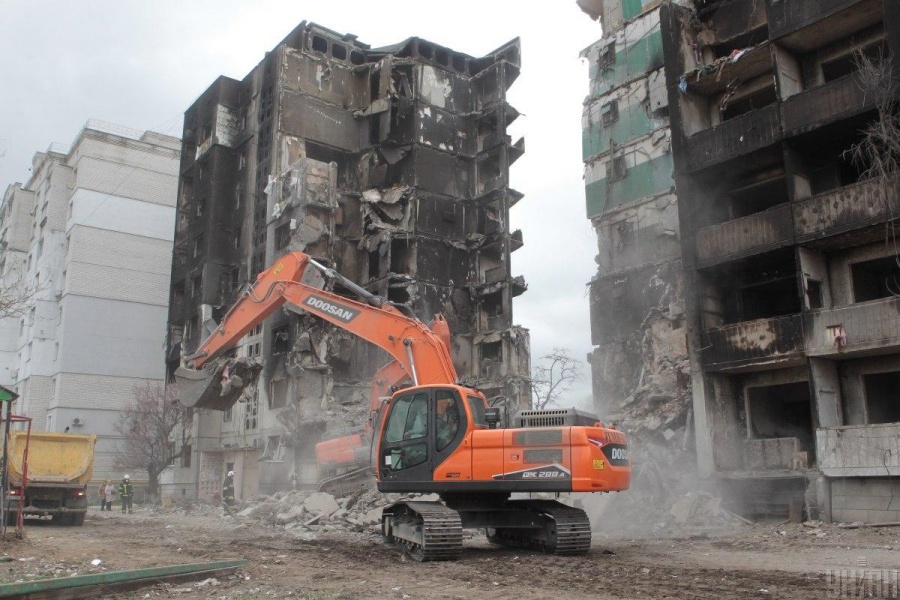 Oleksiy Danilov, Secretary of National Security and Defense Council claimed that Vladimir Putin, the President of Russia, and Serhii Shoigu, the Minister of Defence planned to create the concentration camps for Ukrainians in Siberia. It was planned that Ukrainians would build new cities there.

«The main aim of the Russian Horde is to destroy our country, our nation, to colonize Ukraine. There is no doubt there Russia will not stop. Until we do not kick them out of our territories, including Crimea, the war will not be over», Danilov informs.

Volodymyr Zelensky, the President of Ukraine proposed a special War Tax, first of all against Russia, in the support of Ukraine at the Ministerial Conference of the World Bank

“Special War Tax is necessary. Russia and any other aggressors have to pay for having disrupted global stability. Such a War Tax has to be imposed on each commercial transaction with Russia, on export, import and financial transactions which are not blocked”, Zelensky said.

Ukraine needs 7 billion USD worth of aid every month as Russian forces aim to destroy all facilities in Ukraine that could sustain the economy, Volodymyr Zelensky states.

Denys Shmyhal, the Prime Minister of Ukraine notes that Ukraine’s GDP could fall by 30-50% this year, and according to a preliminary analysis, direct and indirect losses due to the war are already 560 billion USD.

On April 21, Russian troops occupied 42 localities in the Donetsk region, stated Olena Symonenko, the Adviser to the Deputy Head of the Office of the President of Ukraine.

According to her, 3.5 thousand localities are under occupation. This is a third of the entire territory where military actions are currently taking place.

“We all understand that to these localities (occupied on April 21 in Donetsk region – ed.) will be still difficult to deliver provisions, food, and hygiene products. Violent military actions are taking place there,” said Symonenko.

In the Kharkiv region, there have been 50 attacks recorded by Russian artillery and MLRS over the last day.

According to Oleg Syniegubov, 2 civilians were killed instantly because the shell hit the car, and 2 more people were injured in Kharkiv and Kharkiv region.

“Juvenile prosecutors have two tricks – children who are victims and children in conflict with the law. Russia poisons their souls and forces them to take an indirect part in providing the invaders with military information, transporting weapons, and so on. This is a direct violation of the requirements of Art. 38 of the UN Convention on the Rights of the Child. So far, we have recorded the participation of 8 children in such actions,” Iryna Venediktova, Prosecutor General, said.

The invaders seize agricultural enterprises in the south of Ukraine, Denys Marchuk, the Deputy Chairman of the All-Ukrainian Agrarian Council announced in a telethonl.

“One of the striking examples of raider seizure is the Spivdruzhnist Pivden enterprise owned by the member of the All-Ukrainian Agrarian Council. Invaders who named themselves Kadyrov`s people came and said that enterprise belongs to them and that they are the owners there and if they observe a situation where someone exports the equipment, these people will be physically destroyed,” Marchuk said.

According to the expert, during this sowing season 30% of the planned fields that should have been used these days will not be sown since a significant part of the fields is mined or destroyed.

On April 21, shells of the Russian troops hit seven houses in Sieverodonetsk, Lysychansk, and other localities in the Luhansk region. Four civilians and three police officers were injured, announced Sehii Haidai, the head of the Luhansk Regional Military Administration.

As of the morning of April 21, 386 children were injured and 208 died as the result of the full-scale Russian war in Ukraine, reported the Office of the Prosecutor General.

1,141 educational institutions were damaged because of bombarding and shelling, and 99 of them were destroyed.

In the Zaporizhzhia region the AN-26 plane that was performing a technical flight fell. There are casualties, the circumstances are being clarified, Zaporizhzhia Regional Military Administration reports.

Russians disrupt the evacuation of people in the Luhansk region. The bus for evacuation and the car with food were going to Rubizhne, but the shelling started and they did not reach the city, said Serhii Haidai, the head of the Luhansk Regional Military Administration.

At night, Sloviansk was fired, probably, by cluster bombs. People were not hurt, the damage is currently being established, announced Vadym Liah, the head of the military administration of the city.

Russia plans to establish full control over Donbas and southern Ukraine and to provide a corridor to the Crimea, stated Rustam Minnekaiev, the Deputy Commander of the Central Command of the Russian Federation.

“Control over the south of Ukraine will provide the Russian Armed Forces with another exit to Transnistria, where the facts of oppression of the Russian-speaking population are recorded,” Minnekayev added.

According to him, control over Donbas will provide a land corridor to Crimea: “It will also affect vital facilities of the Ukrainian [military forces], Black Sea ports, through which supplies of agricultural and metallurgical products are carried out to [other] countries.”

The Russians refuse to open a humanitarian corridor for civilians at the Azovstal steelworks plant in Mariupol; they pretend they do not see the difference between a corridor for military surrender and a corridor for civilian evacuation. This way, the occupiers are trying to put additional pressure on the Ukrainian military, said the Ministry of Reintegration Iryna Vereshchuk.

The bodies of 1,084 dead people have been found in the Kyiv region. More than 300 have not yet been identified, said the head of the Kyiv region police Andrii Nebytov. According to him, 75% of people were killed by firearms.

In Borodianka, 80 dead have now been found, but this is not the final number – rescuers are still clearing the rubble.

Three Russian cruise missiles were detected above the Yuzhnoukraisnk nuclear power plant on April 16. According to the National Nuclear Energy Generating Company of Ukraine, one of them was detected by CCTV.

The day before, Russian shelling killed one person and injured two. According to the mayor, these people were out in the city and broke the curfew.

The lights went out all over Sievierodonetsk in the Luhansk region – Russian troops broke the power line. Utility workers are working at the scene of the accident.

Russians kill Ukrainians with weapons received from France in 2015. The weapons were sold to Russia through the loophole that allowed to bypass sanctions imposed on Russia.

This was announced by Mikhailo Podolyak, adviser to the head of the Office of the President.

He posted a video of a car of a civilian family. The Russians shelled the car with the French weapons.

“A small French-made car. The family tried to evacuate but instead were killed by Russian monsters. Killed, as now established, with French weapons sold to Russia through the loophole in sanctions imposed in 2015. Everyone in the EU who tries to flirt with Russia should see the result of their actions,” the advisor stressed.

Civilians were killed from the BMD-4, manufactured and operational in 2015-2016, already after the EU imposed sanctions on Russia that prohibited selling military technology to the aggressor. A French company sold the components and technology for this system.

Today the occupiers shelled the town of Sloviansk with prohibited cluster munitions. Shelling damaged a school and several residential buildings. Information about casualties and destroyed infrastructure is being established.

The bodies of two people were found in the Kharkiv region. Russians tortured them to death and tried to burn their bodies. Law enforcement officers have started proceedings.