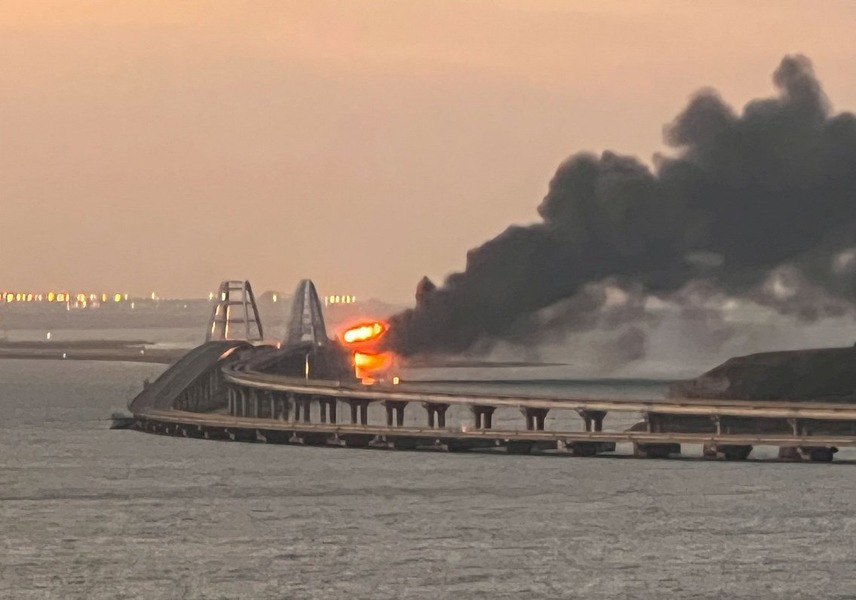 A truck was blown up on the automobile part of the Crimean Bridge from the side of the Taman Peninsula on the morning of October 8, according to the National Anti-Terrorist Committee of the Russian Federation. The truck could contain explosive materials that detonated, inform Nowiny Polskie.

As a result of the explosion, two spans of the roadbed of the branch, which goes from Krasnodar to Kerch, collapsed. The damage is serious and cannot be quickly restored.

Russian military experts immediately blamed the Ukrainian special services for blowing up the bridge, which allegedly carried out a complex sabotage operation.

But is it true? After all, there are stationary ST-6035 inspection radio-technical complexes of the Directorate of Departmental Security of the RF‘s Ministry of Transport at the entrances to the Crimean bridge, which check cars on explosives. This is despite the constant stories of the Russian authorities about the most advanced security measures at the bridge (second place in security after Moscow), and systems that will not allow vehicles with explosives to pass.

A truck filled with explosives could get to the Crimean Bridge only after passing the inspection post. The Russian security forces should have known about the transportation of explosives, as they are always at the posts. Therefore, the FSB may be involved in this. In order to justify future strikes on Ukrainian “decision-making centers,” they are trying to create a precedent as it was in the late 90s with blowing up houses in Russia. This is completely in line with the position of the “party of war”, whose representatives, in particular Kadyrov, call for the use of tactical nuclear weapons.

The destruction of the bridge can be used in Putin’s interests, following the example of Gorbachev, who used the landing of the German amateur pilot Rust on the Red Square as an excuse for generals’ suspension from the service.

Do not forget about builders that constantly violated bridge operation rules. Surely, during the construction of the bridge, structural and construction miscalculations, the use of low-quality materials, incorrect calculations of the bridge’s load-bearing capacity, and so on, could have been made. After a single explosion on the Crimean Bridge, two spans fell into the water at once. In turn, the Antonovsky Bridge in the Kherson region withstood a huge number of missile attacks.

It is almost impossible to escape from Crimea now. Passage through the Crimean Bridge will be blocked until October 31. The launch of ferries is virtually impossible due to the lack of ferries themselves in Crimea. Ferries that carried passengers before the construction of the Crimean bridge, for the most part, left the water area. With the launch of the Crimean Bridge, all shippers were banned from transporting goods to Crimea by ferries. In this connection, it takes time to return to water transportation.

The destruction of the Crimean Bridge will seriously complicate the communications of the southern (Kherson) group of Russian troops and may lead to a critical drop in weapons and ammunition supply.