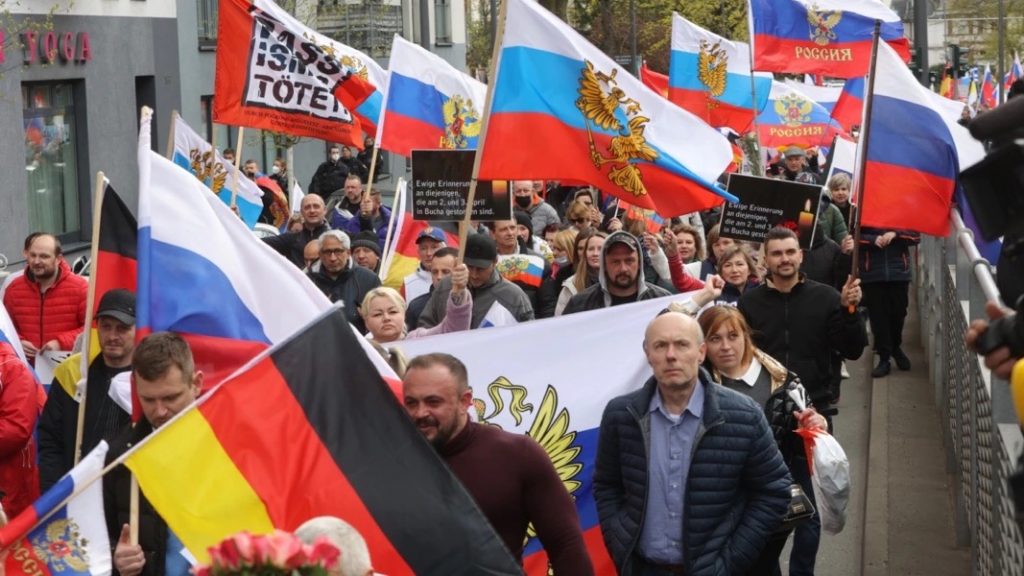 Russians living in Germany hold a demonstration in support of Russia’s actions against Ukraine. Frankfurt am Main, Germany. April 10, 2022.

Russian war propaganda is a poison that has already penetrated the brains of millions of Russians and is poisoning them from the inside. It incites hatred and leads to a destabilization of the situation, an increase in tension and, as a result, to the death of people.

Unfortunately, not all democratic countries understand this.

Today, those who deny the aggression of Putin’s Russia against Ukraine are holding pro-Kremlin rallies in many European countries. The organizers appeal to freedom of speech and freedom of assembly.

At the same time, these measures are used to gradually escalate the situation and create a picture for Russian television, and the next stage may be riots and violence in European cities.

Germans: “This is Putin’s war — you can’t blame the Russians for this war.”

Russians in Germany: “Arrange a motorcade with hundreds of cars from Cologne to Bonn in support of the Kremlin under the pretext of laying flowers at a memorial to Soviet forced laborers during World War II”

Agent network in the Russian diaspora

For years, the Kremlin has been creating an agent network among the national diasporas. With the support of targeted militant propaganda, they carry out activities that cause internal political destabilization in the EU countries.

As a result,  such “measures” develop into riots and terrorist attacks, in order to later say: “Do you want the same as in Paris, Berlin or Cologne ?!”

The Russian Federation used the same tactics 8 years ago during the so-called Russian spring to destabilize the internal political situation in the southeastern regions of Ukraine.

At that time, Moscow pinned high “hopes” on Odesa, where in the spring of 2014 it began to hold “anti-fascist” rallies. The May Day pro-Russian rally called for a return to the USSR, but before to destroy Ukrainian independence.

On May 2, the combat wing of the “anti-fascists” staged a pogrom in the city and attacked a pro-Ukrainian rally. As a result, dozens of people died and hundreds were hospitalized. Russian propagandists were counting on just such a development and unanimously claimed – “See, there are Nazis in Ukraine!”

Most likely, the goal of the organizers was the TV picture.  After the riot they fled to Moscow, Crimea and Transnistria, where have already begun to give interviews to Russian journalists about “Ukrainian fascism.”

Moreover, this narrative was used to discredit the achievements of the Revolution of Dignity, which, let’s remember, began from Euromaidan due to Viktor Yanukovych’s refusal to sign the Association Agreement between Ukraine and the European Union in Vilnius after a meeting with Vladimir Putin.

At that time, it was not uncommon for “ordinary” Russians to hear something like: “I supported (or even “participated in”) the Ukrainian Maidan, but after burning people in Odesa, I realized that Nazi punishers had come to power.”

Accusations were made against European leaders and institutions: “How can you even consider the issue of entering to the European Union with such a level of spread of Nazism in Ukraine?”

Exactly one year before the start of the current large-scale invasion of Ukraine, the Russian Foreign Ministry issued a statement in which Russian propagandists emphasized that “the tragedies in Odesa and Mariupol marked the beginning of a frenzy of neo-Nazism, forced Ukrainization and a general crack down on freedoms and human rights.”

Thus, the ideological genesis of Russia’s current demands for the “denazification” and even “de-Ukrainization” of Ukraine, as well as maniacal aggression against the population and defenders of Mariupol and attempts to land on the territory of Odesa at any cost, are obvious.

Russian propaganda can be compared with a poison that an inexperienced consumer cannot distinguish from a medicine without special expertise. So it is difficult to distinguish militant propaganda from the media, and hostile measures from peaceful rallies and demonstrations. But Western states must conduct such a “toxicological” examination.

The Russian Federation enjoys freedom of speech in European countries by holding and propagandizing pro-Russian rallies that carry only provocations and the threat of riots. Therefore, the distributors of war special propaganda should not count on and use freedom of speech, which is one of the most important achievements of democracy, for purposes hostile to laws of humanity.

Anatoly KURNOSOV, an expert of the Center for Political Studies “Doctrine”