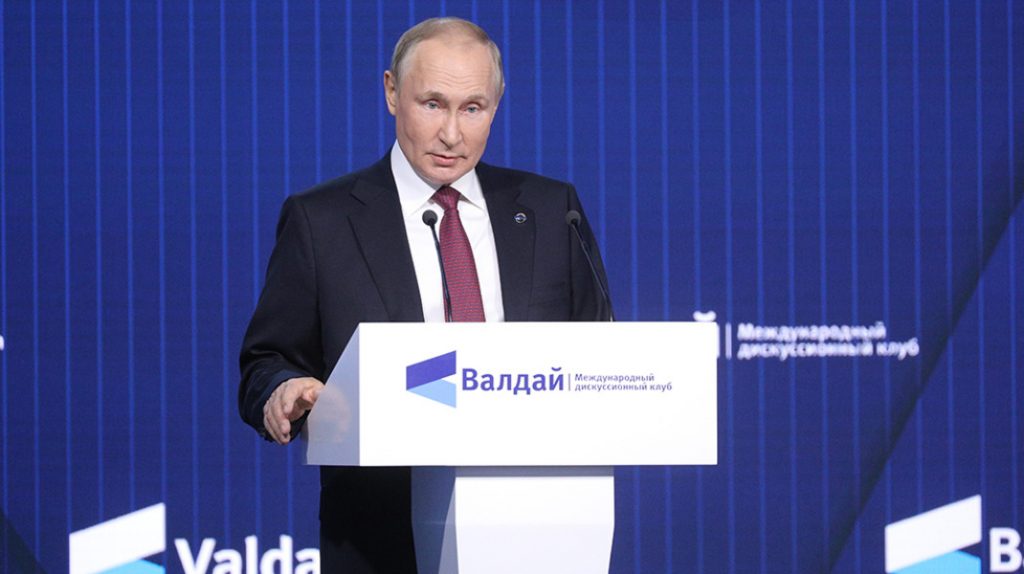 On October 27, Russian President Vladimir Putin spoke at the 19th Annual Meeting of the Valdai Discussion Club, where he once again blamed the collective West for all global crises, which supposedly “unleashed the war in Ukraine.” The President of the Russian Federation tried to shift the responsibility to the West for provoking the food and energy crisis, the provocations in Taiwan, and much more.

In his speech, he again noted a special “historical moment” for Russia. According to him, “the collapse of the USSR destroyed the world balance of political forces and the Western states proclaimed a unipolar world order.” Russia, according to Putin, does not claim to be the world leader, but only fights for existence.

Russian President Vladimir Putin has been openly declaring for more than a year that Russia is waging war with NATO and the insidious Anglo-Saxons, however, at the Valdai 2022 forum, he said that Russia did not consider itself an enemy of the West, and only the guarantor of Ukraine’s sovereignty could be only Russia.

Putin believes that Western hegemony is outdated. He called Europe a “vassal” of the United States, and supposedly, the majority of peoples in the world oppose Western influence.

Speaking at the Valdai 2022 forum showed Putin’s strong desire to negotiate and end the ongoing phase of the war he has unleashed against Ukraine on his own terms, in order to represent negotiations as a Russian victory over the collective West. At least eight times, in different variations, he proposed the West to resume dialogue, to be friends and cooperate. This is becoming a main theme for the Kremlin: to come to an agreement with the West by any means, to achieve a pause for further aggressive actions and possible ways of retreat.

The head of the Russian Federation called for the formation of “a new financial structure of a multipolar world without the dollar”, accusing the West of freezing Russian assets for no reason, despite Russia’s aggression against Ukraine.

Vladimir Putin’s remarks in his Thursday speech are “not new” and are signal the firmness of its strategic intention, including on Ukraine.

Apparently, somewhere in Putin’s “calendar plan” for 2022, “Valdai” was planned as a “conference of winners.” The President of the Russian Federation should report on his great achievements: the capture of Ukraine in “three days”, the final elimination of the “unipolar world”, the revival of the USSR, and so on. And as a winner, he must dictate the geopolitical agenda. One problem. In order to be a “winner”, you need to really win, and the fact that the Kremlin leader has serious problems with this became clear to everyone back in the spring of this year, when he could not capture Kyiv. Subsequent events have only confirmed it.