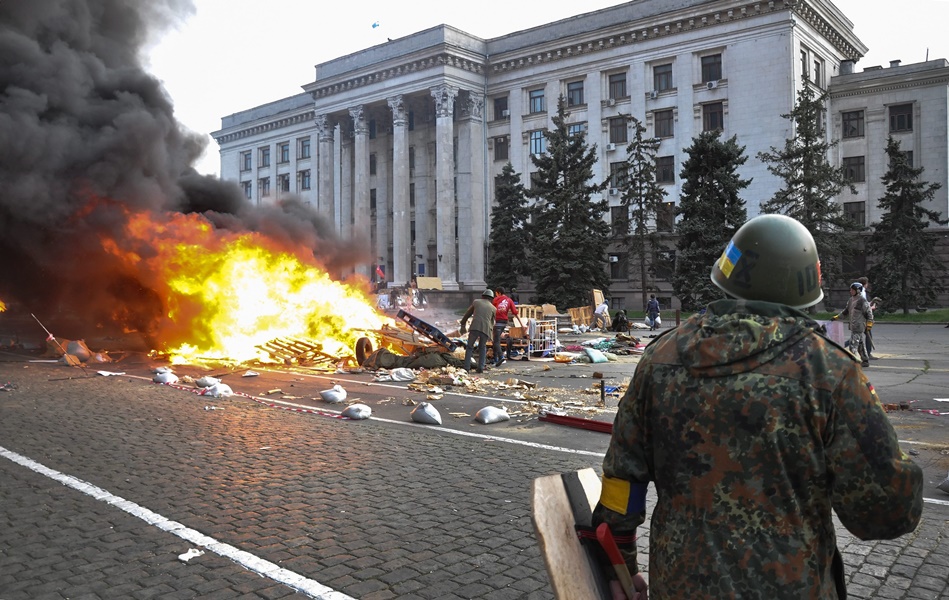 On May 2,2020 we commemorate the 6th anniversary of Odesa tragedy when 48 people paid ultimate price for cynical and provocative plans of the Kremlin to destabilize the southern Ukrainian region of Odesa under the same bloody scenario, that had already been implemented in Donbas.

Russia orchestrated the destabilization of the Ukrainian South-East, creating tragedies like Odesa events of 2 May and using them then for propaganda purposes.

There is an evidence that bloody clashes in Odesa on May 2, 2014 may have been were carefully planned and funded by Russian agents and saboteurs.

It speaks volumes about Russia’s hand in fuelling clashes in Odesa that during two stages of release of detainees in September and December 2019 Moscow demanded the release of at least nine individuals involved in organising or participating in Odesa clashes in May 2014 on the side of anti-Ukrainian extremists.

Odesa events, including the fire in the Trade Unions House, should be considered within the broad context of Russian special operations, aimed at collapse of Ukraine as a state within its internationally recognized borders.

To that time, attempts to undermine Ukraine’s territorial integrity and proclaim puppet “independent” entities under Russian control were already registered in Donetsk, Luhansk, Kharkiv, Dnipropetrovsk, Mariupol, Kherson and other cities of Ukraine’s South and East. All attempts were repelled, but in Donetsk and Luhansk Russia succeeded in consolidating the occupation gains under the guise of “people’s republics”.

Geographical scope and timeline of provocations clearly coincide with the territories marked by President Putin in his interview on April 17, 2014 alleging that Kharkiv, Luhansk, Donetsk, Kherson, Mykolaiv and Odesa were parts of so-called «Novorossia» transmitted to Ukraine only by the Soviet Government.

The purpose of the destabilizing activities, started almost simultaneously with the Russian military operation in Crimea, was to destabilize situation in Ukraine after Maidan and to create a separatist puppet state «Novorossia» in the East and South of Ukraine for Russia, thus preparing the ground for Russia’s direct military intervention in Ukraine.

Under international law, such actions by Russia are qualified as an «international armed conflict». They clearly fall under the UN General Assembly resolution “Definition of aggression” (3314 (XXIX), in particular its para g) which defines “the sending by or on behalf of a State of armed bands, groups, irregulars or mercenaries, which carry out acts of armed force against another State” as acts of aggression.

Odesa and Odesa region were an important part of the “Novorossia” plan. In Odesa, pro-Russian rallies had been taking place since March 1, 2014. On March 3, 2014 about 700 pro-Russian extremists stormed the Regional Council building and raised the Russian flag over it. On March 9, 2014 the pro-Russian protesters set up a tent camp at the Kulikovo Field in front of the Trade Unions House. On April 21, 2014 a number of local separatists announced the creation of the “Odessa People’s Republic of Novorossia”, as it was done a bit earlier in Donbas.

May 2, 2014 was supposed to become a decisive day in the ongoing destabilization of Odesa and the region. The conflict was initiated by pro-Russian forces. They purposefully attacked a column of pro-unity activists, mostly football fans, who were heading to the football match, singing patriotic chants on their way and had no aggressive intentions. Pro-Russian militants attacked the column with firearms and killed two football fans. These actions were obviously not spontaneous, but prepared in advance — militants were well organized and armed.

As Ukrainian patriotic rally was much more numerous, militants started to retreat to their tent camp at the Kulikovo Field with pro-unity activists on their heels. Pro-Russian militants and some of people from the tent camp locked themselves in the Trade Union House, and the siege finally ended up with fire and the deaths of dozens.

The circumstances of this fire still raise questions. The investigation has found that there were five points of fire origin in the building and only one of them could be ignited from the outside.

A number of circumstances of the tragedy suggest that it could have been planned by pro-Russian forces in order to provoke clashes and, using chaos, seize the power in the city. While one cannot definitely claim that the fire in the Trade Union House was a planned provocation, the armed attack on the pro-unity demonstration was a well-planned action.