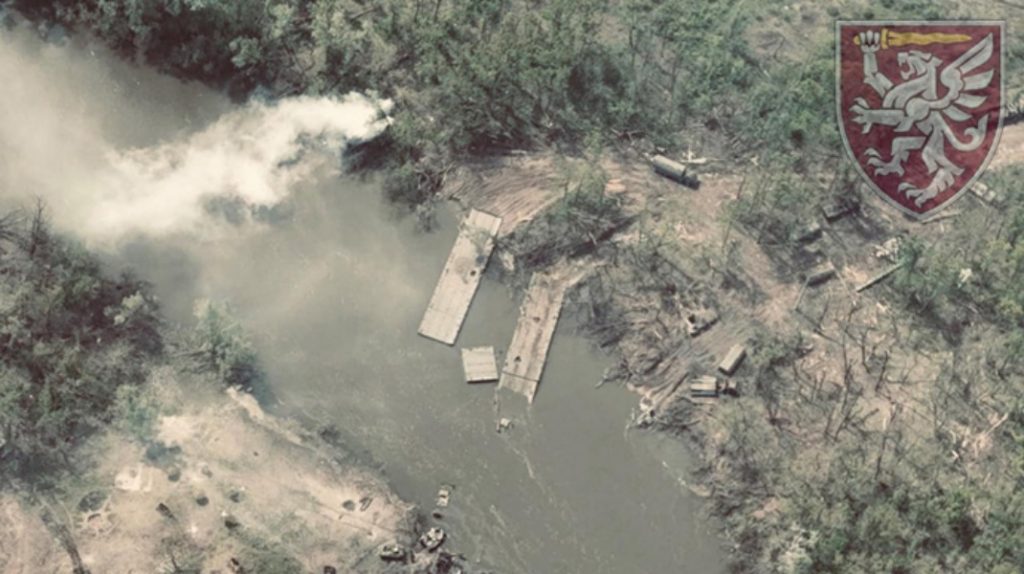 “Our courage amazes the world, our music conquers Europe! Next year Ukraine will host Eurovision! For the third time in its history. And I believe it will not be the last time. We will do everything to host the participants and guests of “Eurovision” one day in Mariupol, Ukraine. Free, peaceful, rebuilt! Thank you for the victory of Kalush Orchestra and everyone who voted for us!

I am sure that our victorious chord in the battle against the enemy is not far off.

Another night rocket attack – in the Lviv region

“Around 04:30 there was a rocket attack on one of the military infrastructure facilities. As of this moment, there is no information about the dead and injured. The location and nature of the destruction are being clarified,” writes the head of the Lviv regional administration, Maksym Kozitsky.

11 enemy artillery attacks on Severodonetsk in 24 hours, 4 residents of Luhansk Region wounded by Russian shelling on 14 May, the current Governor of Luhansk Oblast Serhiy Gaidai reports.

“40% of all Russian attacks on 14 May were in Severodonetsk. About the same number of others were in Gornaya and Popasnya communities. There is a lot of destruction. There were 11 high-rise buildings in the new and old districts of the city, several of which caught flats on fire. The Russians hit the technical college building and continue to destroy Azot. Yesterday morning after another arrival, flames engulfed one of the industrial plants,” says Gaidai.

Russians are preparing a disinformation attack with children and parents from Mariupol. For this they want to use parents of children deported to Russia and Donetsk.

“Because of the threats to separate their children permanently, the parents are being forced to record a video message, where they will “testify” in the background that the separation of the parents and children was carried out by Azov fighters and Ukrainian military nationalists themselves. And it was the Ukrainian military that impeded the reunification of families, in particular parents with children who were in hospitals,” said Petro Andryushchenko, adviser to Mariupol’s mayor.

After such videos, the Russians are planning a second series where they found and returned the children to their parents to enhance the information and psychological effect.

“Yesterday the occupiers used incendiary or phosphorus bombs against Mariupol defenders for the first time (we will leave the conclusion to experts). The occupiers themselves claim to have used 9M22C incendiary shells with termite layers,” reports Petro Andryushchenko, adviser to Mariupol city mayor.

2,500 Chechens fought against Ukraine on Russia’s side. The military intelligence service of the Ukrainian government has made the list public

“About 2,500 fighters from the Chechen republic were involved in the military invasion of Ukraine,” Chief Directorate of Intelligence of the Ministry of Defence of Ukraine says.

“The so-called “Kadyrovtsy” began entering Ukraine in the first days of Russia’s large-scale military invasion. Being in the second echelon of the offensive, they engaged in house raids, torture of hostages and civilians, looting and robbery. After the first large-scale losses of the Russian troops, the ‘kadyrovtsy’ were ordered to stop the retreating units of the occupants and shoot those who refused to fight on sight.”

Here is the list of Chechen fighters, with contact details and addresses of their residences, that was made public by the HUR

Four rockets hit a military facility in the Yavoriv district. It was destroyed. Fortunately, there were no victims. – The details of this morning’s shelling in Lviv were reported by the city’s mayor Andriy Sadovyy.

“The air defence forces shot down two missiles. The explosions that were heard in Lviv are the air defence’s consequence. Thank you for keeping us safe! This time the target was 15 kilometres from the border with Poland, the EU and NATO,” Sadovyy said.

Italian police managed to thwart several hacking attacks during voting at the 2022 Eurovision Song Contest in Turin on May 10 by the hacking group Killnet and its Legion affiliate.

The Legion’s Telegram channel published reports indicating that DDoS attacks had been received by the music competition’s servers. The attack was coordinated before voting began, but lasted only 13 minutes, after which members of the group texted back: “Well done, everyone! Thank you for responding and devoting your time“.

Air defence forces shot down a Russian missile in the Kirovohrad region on the night of 15 May. – Andriy Raikovych, head of the Kirovograd RMA, reports.

“In the morning, air defence forces shot down a missile flying in the direction of Kropyvnytskyi in the Alexandriysky district!” (Direct speech).

Russian invaders confirm that they are using phosphorus and cluster munitions banned by international conventions in Ukraine. – Another interception of a conversation between the occupiers by the Ukrainian Security Service

“Everyone is waiting for Volodyka (Putin – ed.) to get fed up with all this, he will withdraw the troops and throw the Topol here. And so, you see, everything that was banned by international conventions: the cartridges, phosphorus – we were allowed to use everything, we are launching everything there“. – direct speech of the occupant.

An official of Ukrzaliznytsia is suspected of treason – he helps the occupiers to restore communication between the occupied territories of Donbas and the Russian Federation. – Prosecutor-General’s office

Having agreed to the proposal of the Russian occupation authorities, he received a similar position in the structure of the “DNR” pseudo-Ministry of Transport.

It is noted that the suspect is personally supervising the repair works at the station, which was damaged during the hostilities, in order to restore the railway connection between the temporarily occupied territory of Donetsk Region and the Russian Federation as soon as possible.

The wives of the defenders of Mariupol: The entire garrison must be withdrawn, the situation is terrible. – Wives of heroes in online conversation with journalists

“They are now amputating limbs even with small injuries and without painkillers, just cutting them alive… They have no medicine. They have a glass of water for everyone – they take a sip every five to six hours,” added another.

“The room in which the hospital is set up is very hot and there is little possibility of transferring food and water, supplies are really scarce. People are developing septicemia. The women are convinced that “a military de-blockade is possible, but there is no time for it”, because it is only possible for Mariupol when other cities are liberated.

“If taken to a street check, the occupiers make a body examination for tattoos, look through the contents of the phone, car, belongings. Many do not go through this ‘procedure’. Afterward, people are taken away to an unknown destination. Kherson residents who have been in captivity and escaped to Ukrainian government-controlled territory speak of the abuse and violence inflicted on them during interrogations. The torture, kidnapping and murder of civilians by Russian militants is nothing but an act of terrorism in accordance with the Council of Europe Convention on the Prevention of Terrorism and a war crime in accordance with Article 8 of the Rome Statute of the International Criminal Court,” the Ombudsman for Human Rights in Ukraine notes and calls on the UN to take these facts of Russian war crimes in Ukraine into account.

Russia conducts covert mobilization in the ORDLO: men are sent to the front line, women are collected from the data. – Ukrainian Parliament Commissioner for Human Rights Lyudmyla Denisova said.

“Russia carries out covert mobilization in the temporarily occupied Ukrainian territories, and even women are planned to be conscripted into the Russian armed forces. In particular, such activities have begun in the temporarily occupied Crimea, where many citizens during the conscription refuse to fight against the Ukrainian army and surrender to the AFU,” Denisova informs.

According to the regional military administration, the Russians launched a total of 11 attacks on the city during 14 May.

“The sad tide of death is not subsiding. People are dying not from shelling but the consequences of the occupation. Nervous breakdowns, lack of medical services, unsanitary conditions, and destroyed immunity due to starvation are the four horsemen of the Apocalypse in Mariupol.” – direct speech.

In eighty days of Russia’s full-scale war against Ukraine, the troops of the aggressor country have already destroyed 616 medical institutions, of which 101 have been destroyed completely. To rebuild them, according to Ukrainian Health Minister Viktor Lyashko, 32 billion hryvnias are needed.

“They evacuated 10 people, including four children and two people with low mobility. In Severodonetsk, the Russians are scaring the population and destroying houses. More people are wishing to leave. Police patrols were able to pick up 10 people, the vehicle came under fire. Luckily, they got through quickly without casualties.” – direct speech.

The head of the Ukrainian jury at Eurovision 2022 has apologised to the Polish people for the low score. According to him, members of the jury did not give points but positions. That is 1 for the best performance and 24 for the worst. “I did not know what the result would be, I saw it myself during the live broadcast. I apologise to Polish people,” said Vadim Lisitsa.

In turn, Minister of Culture of Ukraine Oleksandr Tkachenko expressed his special opinion about the points given by the Ukrainian jury to Poland and Lithuania. “This assessment in no way reflects the real attitude towards you, our closest friends in Europe. To give the Poles and Lithuanians 0 is a shame. The people of Ukraine gave you 12!”.

All Ukrainian-controlled settlements in the Luhansk Region are without communications and mobile phone service. The Russians are deliberately scrambling on life support facilities according to the National Police in the Luhansk region.

There was no information on casualties. On 14 May, the occupants continued shelling Hulaypole and destroying civilian infrastructure throughout the day. The SBU in Zaporizhzhya region has received materials to open criminal proceedings under Part 1 of Article 438 of the Ukrainian Criminal Code “Violation of laws and customs of war“.

Two people were killed in Severodonetsk due to shelling by the occupants on 14 May. This was reported by the head of the Luhansk RMA, Serhiy Haidai.