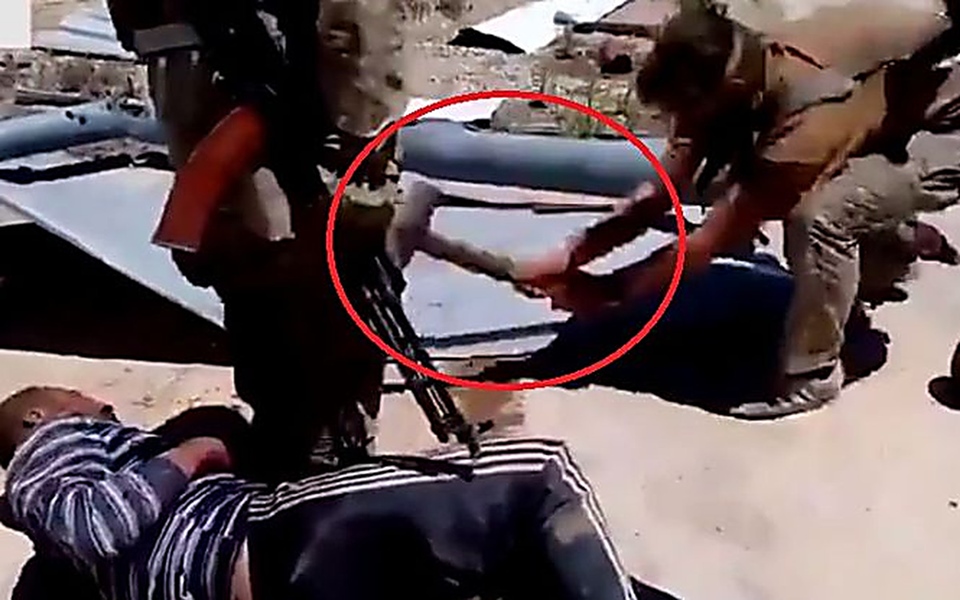 Ukrainian center «Myrotvorets» published on its web-site a private tape shedding light on the events that had happened 2 years ago in Syria, where Russian PMC Wagner (unit of the Main Directorate of the General Staff of the Armed Forces of the Russian Federation) brutally murdered, dissembled the body and burned a Syrian national.

The video shot by the Russian mercenaries captured how they first tortured an alive prisoner, then crushed his arm and legs with a subsequent homicide. R.I.P.  They cut off man`s heads with a knife and a shovel, chopped off his hands and cut out the following inscription on the sufferer`s body: « LONG LIVE THE VDV AND RECONNAISSANCE!».

This video shows how Russian executioners hang up a dismembered body, pour a mixture of fuel on it and set it on fire.

Ukrainian center «Myrotvorets», which published a video of the atrocities of Russian mercenaries in Syria, added that they «successfully identified three Russian executioners who are present in these footage». All these hangmen have long been in the database of the «Myrotvorets».

The present tapes caused a shock in the community. Greek priest Romanos Anastasiadis wrote in his blog the following,

Is this army blessed by the Russian Church? This armed forces is the army of a state that pretends to be «Holy Russia», … the patron of Orthodoxy … How do these Orthodox Russians differ from the fanatical jihadists who kill Christians? Undoubtedly, this has nothing to do with Christianity or Orthodoxy. This is just an ordinary Russian business …

Apparently, the international community sees no longer sense to remind PMC Wagner of the (Geneva) Convention relative to the Treatment of Prisoners of War. However, the international community is able to respond by action, give a legal and moral assessment, finally, investigate the criminal atrocities of Russian mercenaries in Syria (as well as in Ukraine and other states). There can be no justification for terrorism, whatever side it takes.

One can imagine the consequences if tomorrow these «brave» Russian mercenaries from PMC WAGNER get a mission to guard the gas pipeline «Nord Stream 2» in Europe. What or rather who would be the canvas for them to cut out their favorite slogan «LONG LIVE THE VDV  AND RECONNAISSANCE»?