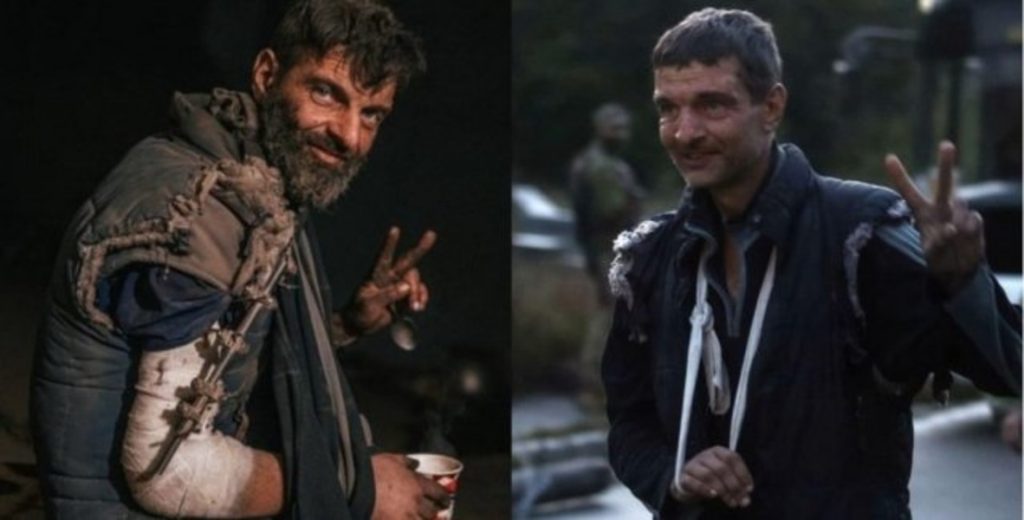 On September 21, 2022, when Vladimir Putin declared mobilization for the war with Ukraine, some good news also came as Ukraine was able to secure the release of 215 Russian-captured defenders of Mariupol, who had been heroically holding their ground at the Azovstal metallurgical plant. Among them are 124 officers who have been held hostage by Russia since late May and 10 foreign defenders of Ukraine, citizens of five countries. The released foreign nationals were transported to Saudi Arabia’s Riyadh.

Ukraine’s defenders who returned from captivity were in really poor condition: physically and mentally exhausted, with general health issues, some couldn’t even move without assistance. All suffer from preorexia, which suggests that they were deliberately starved. 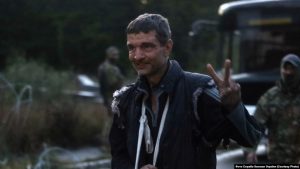 In the photo above, Mykhailo Dianov, 42, one of the Azovstal defenders, Senior Sergeant with the 36th Separate Marine Brigade of the Armed Forces of Ukraine. Mykhailo was wounded during a firefight on the steelworks premises: he sustained bullet wounds in both legs, while his right arm was crushed: 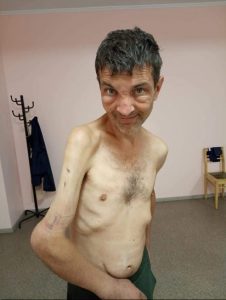 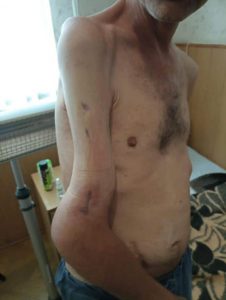 After living in inhumane conditions in Russian captivity, Mykhailo’s wounded arm is in a grave state, lacking 4 centimeters of bone. His eye bags testify to dehydration, while a swollen stomach – to extreme starvation he has survived.

In just one day, Ukrainians raised more than UAH 5 million for Mykhailo’s treatment. However, it is still too early to start the surgery process. Now he needs to gain weight because his physical condition does not allow for surgical manipulations as he has lost more than 30% of his body weight. The operation may now be dangerous for his general health.

While in Russian captivity, Mykhailo was not only deprived of medical assistance, but also saw his condition worsen. After being seriously wounded in the arm, Ukrainian field medics at Azovstal installed an Ilizarov device in his bone*: 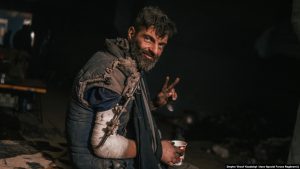 *The Ilizarov device is a transosseous compression-distraction tool for osteosynthesis (healing bone fractures through the formation of interstitial callus). In addition to compression, it also performs a complete closed reposition of fragments.

When he fell into the hands of the Russians, they pulled the device out of his hand with rusty pliers, without anesthesia. After that, they provided no medical assistance to the man so his hand “healed” the wrong way.

This is how Mikhail looked before he was captured by the Russians: 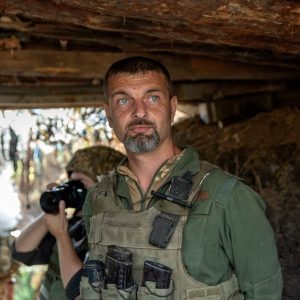 Also back from captivity are Mikhail Vershinin, the chief of the patrol police in Mariupol, who lost almost 40 kg, and another police officer Svyatoslav Yermolaev. This is how they looked before and after captivity: 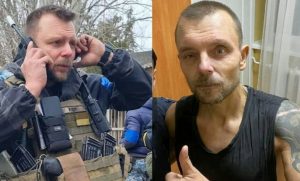 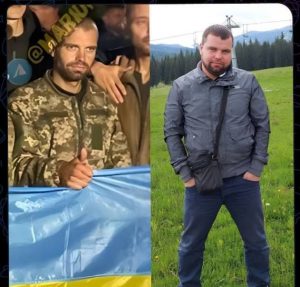 The whole world supports Ukraine, both men and women from different countries come as volunteers to fight at the front line against the forces of the aggressor power.

John Harding, 59, is a British paramedic who fought for Ukraine alongside Ukrainian troops. He was at the Azovstal plant when he was captured by the Russians: According to the Briton, the captives were beaten, tortured with electric current, and subjected to many other forms of violence. One guy was deliberately stabbed in the leg, after which the wound was stitched up. When POWs were being transported to another location, bound and blindfolded, they would beat them on the way. When they were led through the door, they arranged it so that they hit their heads on the doorposts. They tortured captives with an electric current. To this end, they usually used an old field phone, which has a mechanism for generating current.

Harding was held in terrible conditions, he recalls: a cell measuring 2×4 meters was shared by several prisoners. The Russians bullied and threatened the man, even forcing him to record a farewell video for his daughter.

According to John, he saw how another British citizen, Paul Urey, 45, died in captivity. 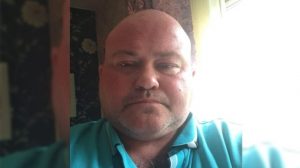 After a series of difficult negotiations that lasted for 1.5 months, Russia returned the body of British volunteer Paul Urey. Russian claim that the man had died as a result of an illness turned out to be a lie. Multiple torture marks were revealed on the man’s body.

Women were and continue to be held in Russian captivity as well. The conditions of their custody were most often the same as for men, except that they were not subjected to physical violence. Sometimes ten women would be held in cells designed for two or three. After being brought to their detention center, especially those in Russia, they were shaved bald, while some were not allowed to take a shower, comb or tie their hair. No medical assistance was provided to them whatsoever. That is, they were not treated as female prisoners are supposed to be, as is laid down in the Geneva Conventions.

Ukraine has handed over 55 Russian servicemen to Moscow as part of a prisoner swap. While in Ukrainian captivity, the Russians had received all necessary medical care, were properly fed and not subjected to any physical or psychological torture. 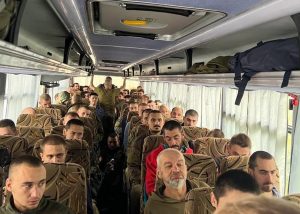 The photograph shows that the captured Russians look healthy, unlike Ukraine’s defenders handed back by the Kremlin.

Analyzing what happened in captivity with the Ukrainian and foreign POWs, we can safely say that Russia is a terrorist state that does not comply with international norms and conventions in relation to combatants. Russia is the personification of evil, which brought the world to the brink of the Third World War. Partial mobilization declared by Vladimir Putin only proves the fact that he wants to further escalate the conflict with the entire civilized world. There is only one way of confronting the Russian leader – financial and military assistance to Ukraine. Only a strong Ukrainian Army will be able to stop the horde that is trying to advance to the West.