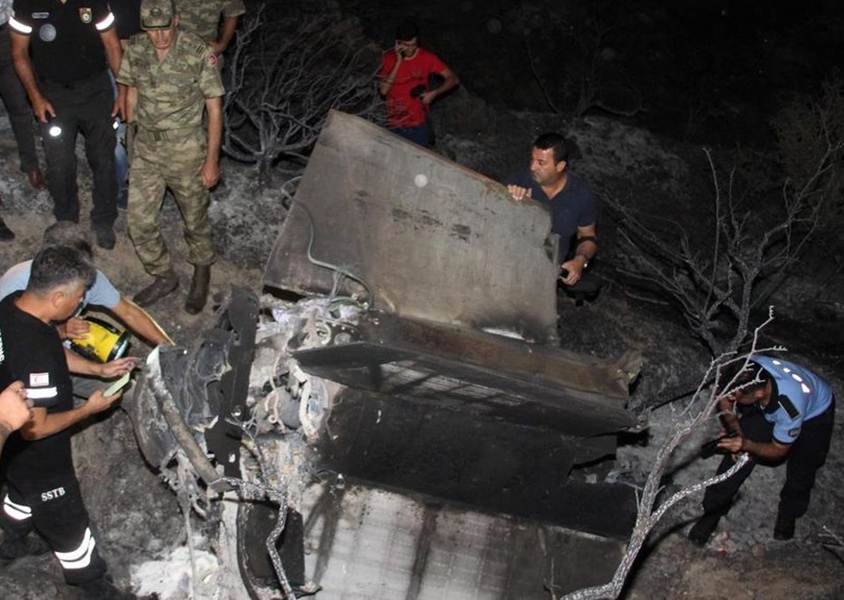 According to some media, on the night of 30 June to 1 July 2019, an unidentified flying object exploded on the Turkish-occupied territory of the Republic of Cyprus near Nicosia, the capital of the Republic of Cyprus. Having thoroughly examined available debris and data detected by a radar telemetry intelligence, military specialists reached a conclusion that the missile was produced in Russia and it was launched from the surface-to-air missile system S-200, the one in service of the Syrian Armed Forced.

The media of Israel, referring to its sources in intelligence services, pending the mishap voiced a corner that missile systems are being controlled by Russian military instructors, despite the fact they are actually in official service of the Syrian Armed Forced. It seems that a missile that entered the airspace of Cyprus was fired under command, control and communication (C3) of Russian military.

One significant detail is worth mentioning here, when the Syrian air defense systems hit back the Israeli Air Force, engaged F-15s have already entered the airspace of Israel and were about to land on their military bases. Combat aircraft were located to the South from the defense systems, however the response fire was aimed to the West.

The only flight from Israel crossing Cyprus by air at that time was conducted by a Russian company «Aeroflot», flight SU 0505. According to the schedule, it was supposed to leave Ben Gurion at 00:40 and fly over Cyprus after 1 am. However, taking into account relevant data from the source: flightaware.com, the flight departure at 00:56 am and crossed Cyprus consequently later. It seems that, the Russian missile S-200 launched by the Russian military of t from the territory of Syria flew through the airspace (breached the principle of territorial inviolability) of Cyprus (and the European Union, respectively) shortly before.

Some bystanders and readers will think that this story is senseless. I`m not an advocate of a conspiracy theory and, probably, i could agree if not for the events that happened in the airspace of the Ukrainian Donbass in 2014. That fateful day Russia executed a special operation to bring down the passenger aircraft Boeing 777, namely, flight MH17.

Separatists in Donbas having being under the control of regular troops and military intelligence (GUR) of the Russian Federation, used terrorism as a form of asymmetric warfare against enemy that dominated the fight.

Needless to say, that experience gained in Chechnya helped V. Putin to shape tactics of his own terrorists. At that time the current president of Russia realized that terrorism is an ideal tool for settlement of political misunderstandings inside the country (e.g. the well-known re-enactment of the terrorist attack, adjusted by the FSB of the Russian Federation in Moscow). It is also a tremendous influence on the whole world at minimal cost, which can be used as an excuse for military operations in neighbouring states.

Boeing 777, flight МН-17 was shot by a missile launched from the missile system This information is verified and supported by credible evidence, inter alia,  transcripts of intercepted talks of Colonel of the FSB of the Russian Federation Igor Girkin (aka Strelkov). This act should be considered exclusively as an aggression and responsible people should face the justice. The first group to be found guilty for their international crimes are the executors of orders to fire, namely Igor Girkin, Sergei Dubinsky (officer of the Main Directorate of the General Staff of the Russian Federation) and Oleg Pulatov (commander of the 2nd department of the «GRU DNR»).

Igor Girkin is liable as an accomplice to the crime that resulted into in 297 casualties, he is not a bystander in an operation of Russia in Ukraine. This «hero» is a professional assassin who was drilled in Pridnestrovian Moldavian Republic (1992), in Bosnia (1992-1993), in Chechnya (1995-2005).

Russia has been waging an undeclared war in Ukraine for 5 years. It is blatant that European officials are exhausted with Ukrainian issue and annoyed by the need to support Ukraine. They simply don`t understand what is their benefit and why this is crucial? European officials naїvely believe it`s not their business and it will not affect their states and them. Once lack of foresight had already led  to the deadliest war of all time in the history of mankind.

However, all bread is not baked in one oven. The Republic of Cyprus clearly confirms what is at stake. Resisting daily pressure from representatives of the Russian authorities in Cyprus taught us a lesson on how to understand hints and warning alarms.

Cyprus confirms clear what is at stake, daily pressure from representatives of the Russian authorities in Cyprus do not stop.

Russian missile, which did not reach its target in Cyprus on the night of 30 June to 1 July 2019, was nothing but a «wake up call» to the European Union. It symbolises that a war is close to you, closer than you might imagine. The war is right next to your boarders and what may happen tomorrow is not foreseeable.

There are no clear signs of peace or that the criminal Putin`s regime is going to change its tactics. This all means that there is a high risk that the next «accidentally» fired Russian missile will, God forbid, take down another civil aircraft filled with innocent passengers. How many time should this happen again?