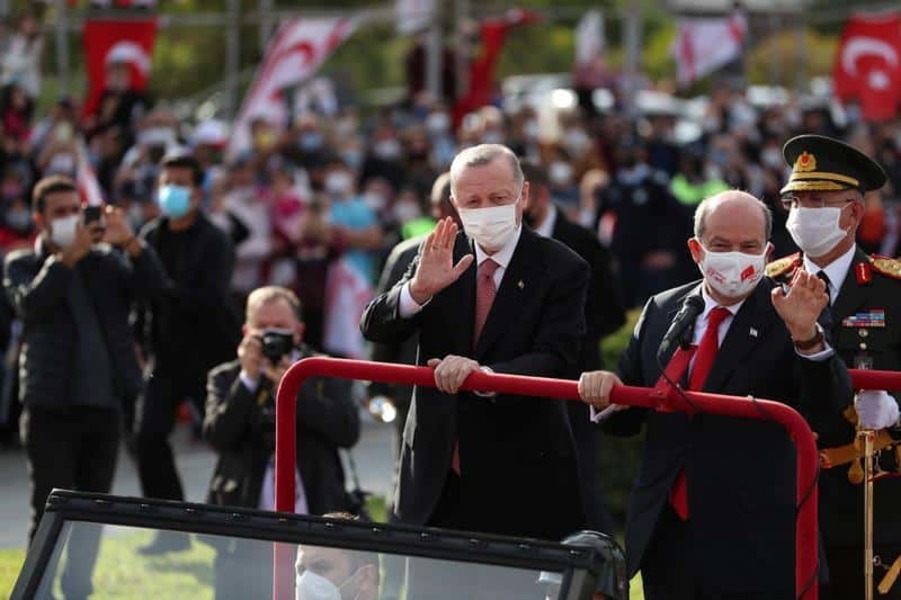 By Theodoros Panayotou for Cyprus Mail

First a clarification. I am not a politician, nor do I belong to any political party. I am an academic. I don’t like to get involved in politics. I’ve only done it once before, in 2010-2013 when I foresaw the financial disaster coming and felt a moral obligation to sound a warning and help address it. I do it now because I foresee half of my homeland being lost forever and I feel the same moral obligation to alert my fellow citizens, who may not have realised that annexation of the occupied territories by Turkey is pending in just a few months, during the interval between the Cypriot and Turkish elections. Let me explain.

In view of the Turkish elections and the adverse opinion polls for Tayyip Erdogan, the Turkish president is issuing daily threats against Greece and Cyprus. Since Greece is fortified both militarily and with bilateral defence agreements with France and the US, it is unlikely that Erdogan will carry out his threats against Greece. As stated, by the Cyprus Minister of Foreign Affairs Ioannis Kasoulides, among others, the weak link, which is at risk, is Cyprus. But one more intervention in Cyprus’ EEZ, or an episode on the Green Line will not inflame nationalism in Turkey enough to raise Erdogan’s popularity to levels that will ensure his re-election to the presidency.

The only action that will be of historical importance is the annexation of the occupied territories to Turkey. This will expand Turkey’s territories for the first time in the hundred years since the founding of the modern Turkish state by Kemal Atatürk, the ‘Father of the Turks’, an honorific title bestowed on him by the Turkish parliament in 1934. This has a great symbolism for Erdogan, who wants to emerge as the new ‘Father of the Turks’, with an Islamic flavour this time.

That Turkey is seriously contemplating annexation of the occupied territories is no secret. For example, sources in Brussels told Kathimerini newspaper, published on November 27, 2022 that “the possibility cannot be excluded that Mr Erdogan will enlist the scenario … of the annexation of occupied Cyprus”. The EU official spoke of a “weak link” as it has become clear, both in the case of the EEZ and in that of the closed city of Famagusta, the international reactions were – if anything – subdued, they moved at the level of verbal remarks and in any case they did not prevent the Turkish designs. Turkey does not hide its plans to annex the occupied territories. The annexation scenario is “maintained by Turkish officials, openly, even in the context of contacts with foreign diplomats”, as published in the same newspaper.

But I also have direct information, from my own sources: from Turkish officials in key positions in the Erdogan government, who were my former graduate students from Harvard University during the decade 2000-2009, when I was teaching economics and public policy there. With some of them, I maintain friendly relations and frequent communication. I am being told by them that annexation is the most likely scenario because “it contains less risk and more symbolism”.

The annexation is planned to be “legitimised” through a referendum based on three arguments: 1) half a century of negotiations have not resulted in a solution, 2) the two-state solution has not been accepted by the other side, and 3) the international community continues not to recognise the ‘Turkish Republic of Northern Cyprus’. Therefore, the only remaining option that will end the “half-century-long isolation of the Turkish Cypriots” is the annexation of the occupied lands to the “motherland”.

This is the narrative being prepared for the international community and the Turkish Cypriots to justify the annexation referendum, the outcome of which is considered certain, due to the settlers’ majority and Turkey’s control over the occupied territories, despite the recent results of the “municipal elections”.
Inside Turkey, the annexation will be presented by Erdogan as a bold patriotic act of historical and national importance on the occasion of the centenary of the declaration of the Turkish state. The hope is that this will cause the desired upsurge of nationalism in Turkey that will ensure the heroisation and re-election of Erdogan to the country’s presidency.

Since the presidential elections in Turkey are scheduled for May 14, the critical months are those between the Cypriot and Turkish elections, i.e. the months of March and April. Following President Putin’s example, who called a referendum and annexed four Ukrainian provinces in less than a month, Erdogan may well choose to do the same with the occupied Cyprus territories.

April is considered ideal for such an undertaking since Greece, with a caretaker government, will be in the midst of divisive electoral confrontation, between the first and second contest, and the attention of the international community will be transfixed on Ukraine where the war will be at its peak.

The international reactions, subdued – as always – will be limited to verbal condemnation. Greece will support us but will not risk war, and the European Union will be content with lukewarm sanctions that will not prevent Turkish plans. The UN will condemn but that’s all.

How much do we care and what do we do to prevent annexation? Unfortunately, the threatened annexation and therefore the permanent loss of the occupied territories of the Republic of Cyprus do not seem to concern Cypriot voters or the presidential candidates.

Either we consider it highly unlikely, or we don’t care because we don’t see what difference it will make in our daily lives. Some of us may still consider a unified state possible or still dream of union with Greece. Others argue that they will manage to resume talks where they were left off in Crans Montana, negotiate the Guterres framework and end up with the BBF, as long as they win the elections.

None of this will prevent the threatened annexation of the occupied area, in a few months, if Erdogan needs it to win the Turkish elections. Of course, even after the annexation and acquisition of a 180 kilometre border with Turkey along the Green Line, running across Ledra Street, we can hope that “one day, in the distant future, the annexed lands will again be free”.

Dr Theodore Panayotou, 2007 Nobel Peace Prize contributor, is a professor of economics and ethics and director of the Cyprus International Institute of Management (CIIM). He taught economics for 25 years at Harvard University