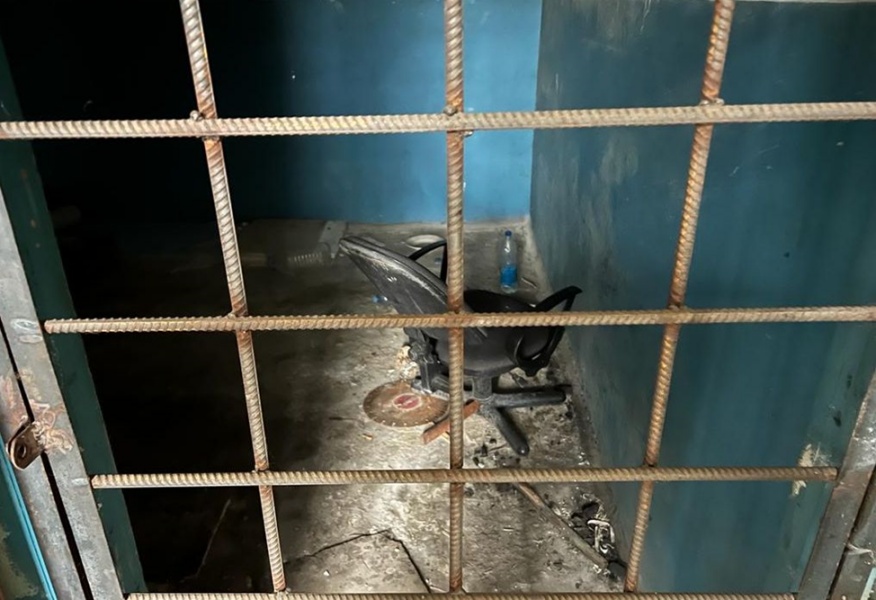 On November 11, the Russians left Kherson and the right-bank part of the Kherson region under the onslaught of the Armed Forces. Evidence of numerous crimes committed by the occupiers against the civilian population is found daily in the liberated territories. The Russians set up torture chambers in administrative buildings and basements of private houses, where inhuman tortures of Ukrainians took place.

The locals were subjected to persecution, torture, moral pressure, many locals were taken to an unknown destination after being detained and interrogated, and their fate is unknown. Some of the detainees died of painful shock in torture. The number of missing people is more than 700. In occupied Kherson and its surroundings, the occupiers practiced bloody terror following the example of the NKVD, and one can only guess how Ukrainians suffer in the territories still held by the enemy. There are traces of the atrocities of the Russians in every Ukrainian city liberated by the Ukrainian Armed Forces, who pathologically hate Ukrainians and seek their complete destruction. It is at the genetic level.

According to the Verkhovna Rada Human Rights Commissioner Dmytro Lubinets, detainees from Kherson were treated with extremely cruelty, worse than with residents of Kyiv, Chernihiv, and Kharkiv regions. This can be explained by the fact that Kherson is the only regional center that the Russians were able to capture. It is a large city, they were afraid of a partisan movement and resistance from the locals. The people of Kherson absolutely did not accept the invaders, the Russians constantly felt that they were strangers in the city, their presence was grotesque and unnatural, the locals would never come into contact with them. The occupiers decided to counteract this with the help of bloody terror, which in its cruelty resembles the worst times of Stalinist repressions. Torture chambers were organised all over the city, where Ukrainians were brutally abused. In particular, more than a dozen people were in one of them at the same time. They were taken for interrogations, beaten with electric shocks, and starved. The torture chamber was not heated. One of the common tortures was putting a gas mask on a head, after which its hose was lowered in a container of water. According to one of the detainees, who went through the horrors of Russian torture, the detained Ukrainians were kept in cells and basements, fed very little spoiled food. Porridge was deliberately oversalted, moldy bread was brought from the Crimea. Detainees were systematically beaten, especially after interrogation. One of them was bleeding internally and his kidneys failed. Those who served in the local TRO (territorial defense) were forced to eat bandages cut into pieces, which indicated their affiliation with the territorial defense. Another popular “entertainment” for the Russian guards was forcing to drink salt water, which caused an upset stomach.

Those who did not want to cooperate or disclose the information about the participants of the anti-terrorist operation and the TRO representatives were beaten with electricity. The Russians called these tortures “Northern Lights”. After it, many remained unconscious for many hours. The participants of the ATO were treated especially cruelly: they were beaten until they started bleeding from the nose, mouth and ears. After that, bloodied, they were taken to the cell and other prisoners were ordered to revive them. Usually, after torture, detainees were forced to confess “how much they love Russia” in a video.

Whole families of Kherson residents were detained, torture of one family member in front of others, forced separation of families and subsequent deportation to Russia were a common things. The executioners were the employees of the Russian Guard (Rosgvardiya) and personnel soldiers of the Armed Forces of the Russian Federation. Ex-prisoners and people with mental disorders were deliberately brought to the torture chambers, which made the torture even more brutal.

Some detainees’ hair turned gray from pain after torture, others received hematomas for internal bleeding on most parts of their bodies. After the beatings, people lost consciousness, the ability to hear and speak. The occupiers filmed individual tortures. After particularly brutal torture, some prisoners died, their bodies were carried out in bags and thrown into garbage trucks. In general, the remains of 63 people with traces of torture were exhumed in Kherson and its surroundings, more than 700 local residents are considered missing. Among the killed are men, women, and kids. As of November 20, law enforcement officers have opened 436 proceedings as a result of crimes committed by Russians against civilians.

Putin has created a society of absolute inhuman evil. Russians hate Ukrainians and are full of thirst for their physical destruction. This is a war for Ukrainians’ right to life, and they have no right to defeat. Russia in the 21st century is committing bloody genocide on national grounds. There is a lot of material evidence of the bloody outrage of the Russians in the occupied territories of Ukraine. Russia must be completely isolated, and Ukraine must receive comprehensive support so that Putin’s evil is destroyed forever.