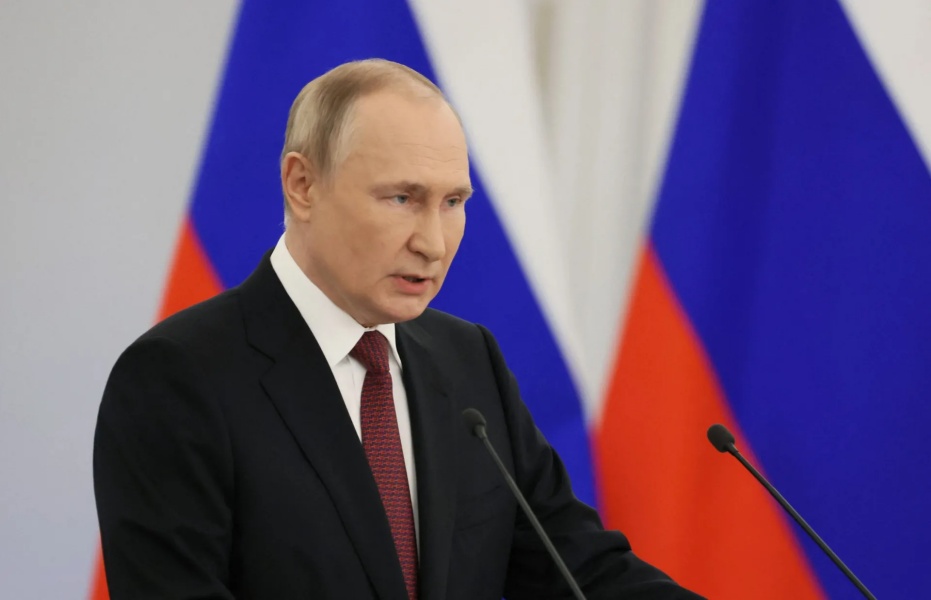 Both Western security analysts and pro-war Russian ultranationalists are skeptical the reshuffle will lead to game-changing tactics or restore momentum to Russia’s campaign, informs Politico.

If Russian President Vladimir Putin hopes a quick reshuffle of generals can revive the fortunes of his faltering campaign in Ukraine and quell bitter turf wars among his commanders, he’s likely to be disappointed.

After only three months as overall commander of Russia’s war, General Sergei Surovikin has been replaced by his boss, Chief of the General Staff Valery Gerasimov, the country’s most senior soldier. Colonel General Alexander Lapin was promoted to chief of the general staff of the ground forces.

Both Western security analysts and pro-war Russian military veterans, however, are skeptical this game of musical chairs will trigger any game-changing tactics or help restore momentum to the Russian campaign. Surovikin will continue as Gerasimov’s battlefield deputy.

They see the shake-up as largely political, and a sign of infighting in the Kremlin, with the defense ministry trying to reassert control of the management of the war and to curb the growing influence of paramilitary boss Yevgeny Prigozhin, founder of the mercenary Wagner Group.

Prigozhin is seeking to seize the limelight by claiming to have made breakthroughs with a massive wave attacks in the east of Ukraine, using so-called penal battalions comprised largely of former prison inmates to deliver a rare Russian victory. This week, for example, Prigozhin claimed Wagner mercenaries had overrun the salt-mining town of Soledar. Ukraine retorts that fighting is still ongoing and that Prigozhin’s tactics are insane because of the huge casualties that he is willing to accept for negligible strategic gains.

In a sign of the personality politics that seem to be looming larger in the splintered Russian military, Prigozhin is also keen to depict himself as a fighter in helmet and flak jacket with his troops on the battle fronts.

The pro-war ultranationalist camp of Prigozhin and Chechen leader Ramzan Kadyrov has long been pushing for a restructuring of the top echelons of the command.

It looks, though, like Putin is not giving them the new arrangement they want, but is instead strengthening the hand of the ministry men, who are often the target of the radicals’ most excoriating denunciations.

Surovikin, known as General Armageddon for overseeing a vicious bombing campaign in northern Syria in 2016, has not been the butt of the hardline camp’s anger. They credit him with having brought more tactical coherence and focus to Russia’s ground campaign. They had been calling instead for Gerasimov, who they blame for failing to seize Kyiv in the early days of the war, Defense Minister Sergei Shoigu and Lapin, another of their bêtes noires, to be sacked.

Ultimately, Putin has chosen to deal with the internal power fissures plaguing the military by elevating Gerasimov and Lapin, and demoting Surovikin.

Rob Lee, an analyst at the U.S.-based security think tank Foreign Policy Research Institute, noted that Prigozhin had praised Surovikin, and suggested this week’s promotions may “partially be a response to Wagner’s increasingly influential and public role in the war.”

Influential pro-war Russian military blogs such as Rybar, which has a million followers on Telegram, were also scathing about the decision to replace Surovikin. The Rybar blog, the work of several authors all apparently well connected to the Russian military, credited Surovikin with achieving much in his three months as overall battlefield commander and for starting to bring some order to a chaotic campaign. 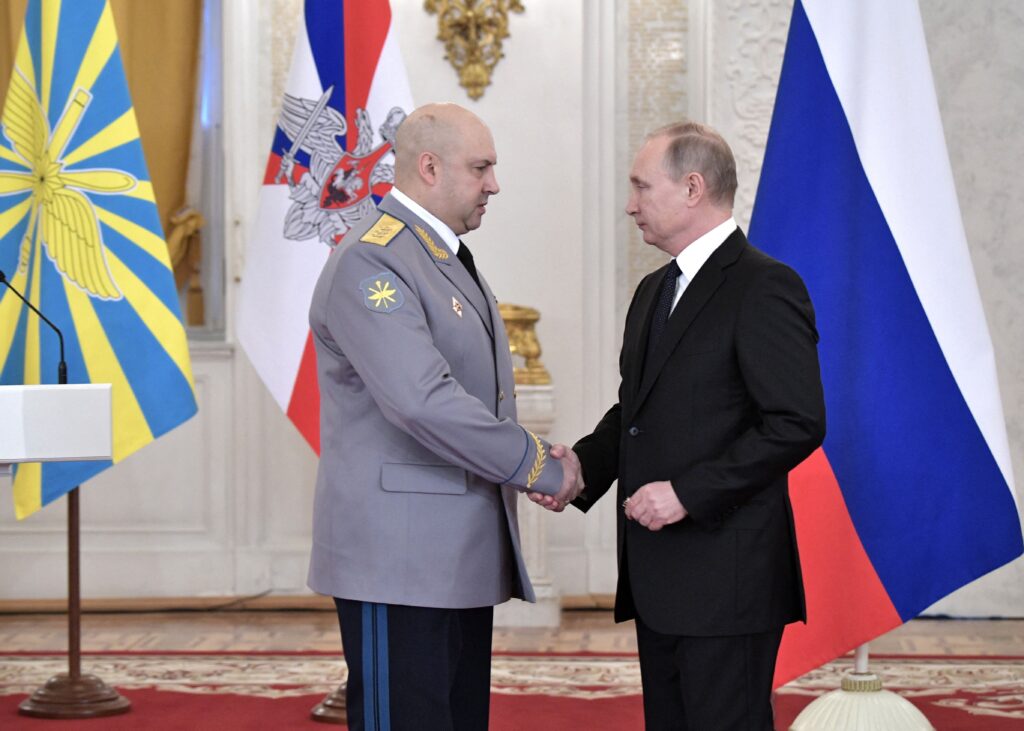 Rybar fumed Surovikin would be left taking the blame for recent debacles — including the Ukrainian missile strike on New Year’s Day on conscripts billeted temporarily at a college in Makiivka that may have left more than 400 dead. Western military experts say the Russians, who claim 89 died, laid themselves wide open to the devastating attack by crowding the soldiers in one building.

Lapin’s promotion has drawn disdain from Igor Girkin, a former intelligence officer and paramilitary commander who played a key role in Russia’s annexation of Crimea and the war in Donbass.

Girkin, who uses the pseudonym Igor Strelkov, said on his Telegram channel that Lapin’s new role must be “to put it mildly, a misunderstanding.” The appointment represents a “boorish” bid by the Russian defense ministry to demonstrate its invulnerability from criticism and impunity, he said. Lapin was sacked earlier this year after failing to rebuff a Ukrainian offensive that saw the Russians pushed out of the strategic town of Lyman, in the Donetsk region.

Chechen leader Kadyrov publicly blamed Lapin for the loss of Lyman, saying he should be stripped of his medals and rank and sent to the front line barefoot with a light machine gun to “wipe away his shame with blood.”  Kadyrov’s outburst prompted a warning from the Kremlin to curb his criticism and to “set aside emotions.”

Surovikin’s appointment in October as overall commander of what Russia calls its special military operation was greeted with delight by Russia’s hawks. Kadyrov praised him as “a real general and a warrior.” He will “improve the situation,” Kadyrov added in his social media post.

Russia’s defense ministry said the reshuffle amounted to “an increase in the level of leadership of the special military operation” and said the change was needed to boost the effectiveness of the military. It specifically cited “the need to organize closer interaction between the types and arms of the troops,” in other words to improve combined arms warfare, the integration of infantry, armor, artillery and air support to achieve mutually reinforcing and complementary effects, something Russia has failed to accomplish.

After his appointment, Russia made a conspicuous shift to pummeling civilian infrastructure in Ukraine, knocking out power stations and water facilities.

The decision to keep Surovikin as Gerasimov’s No. 2 has gone some way to mollify the ultranationalists, but it hardly answers their calls for a root-and-branch makeover of the top brass of Russia’s armed forces.

Over to you, Gerasimov

Whether Gerasimov, a veteran of Russia’s war in Afghanistan, can pull that off remains to be seen. He has experience as a battlefield commander in Ukraine: He oversaw Russian forces and pro-Russian insurgents in August 2014, outmaneuvering the Ukrainians at Ilovaisk in the Donetsk region, where more than 1,000 Ukrainian soldiers were killed. That battle forced then-Ukrainian President Petro Poroshenko to agree to peace talks.

Gerasimov is seen as an advocate of hybrid warfare and is the author of a doctrine, named after him, calling for combining military, technological, information, diplomatic, economic, cultural and other tactics to achieve strategic goals. In May, there were unconfirmed reports that he was wounded when visiting the frontlines, but Ukrainian officials denied the claims, saying he had left a command post shortly before they targeted it.

The Chechen leader and other hawks looked to him to reverse a series of stunning battlefield Ukrainian successes and to turn the tide of war in Russia’s favor. The shaven-headed veteran officer, who has the physique of a wrestler, served in Chechnya and Syria. A ruthless and unscrupulous tactician, he oversaw the relentless targeting of clinics, hospitals and civilian infrastructure in rebel-held Idlib in 2019, an effort to break opponents’ will and to send refugees toward Europe via neighboring Turkey. The 11-month campaign “showed callous disregard for the lives of the roughly 3 million civilians in the area,” noted Human Rights Watch in a damning report. 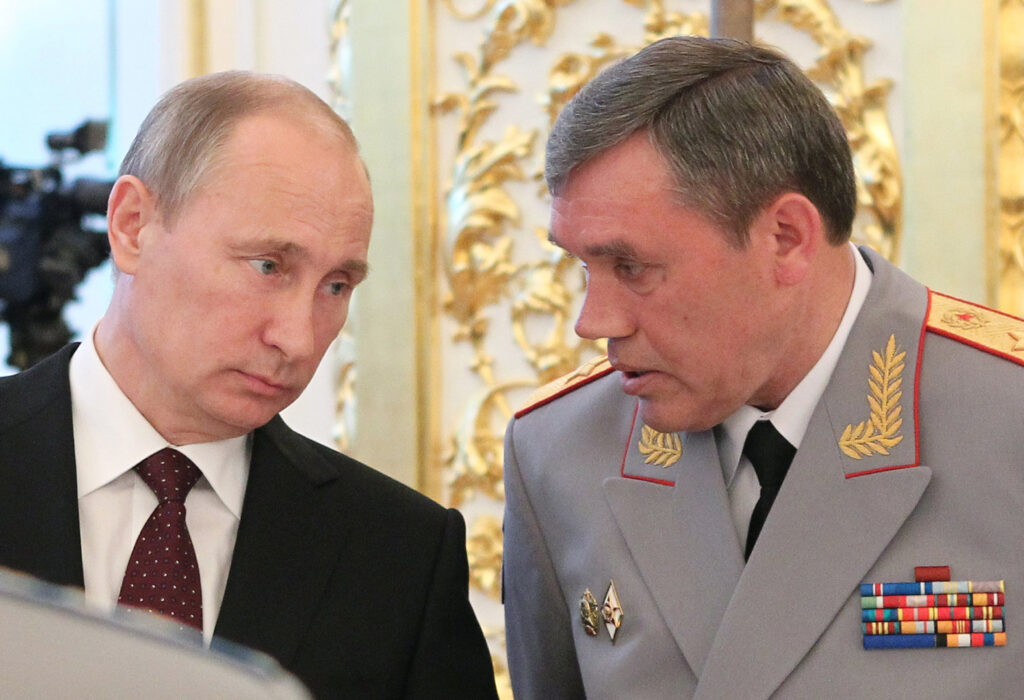 General Sergei Surovikin has been replaced by his boss, Chief of the General Staff Valery Gerasimov | Mikhail Klimentyev/AFP via Getty Images

Since Gerasimov was part of a small circle of Kremlin hawks that advised Putin to invade Ukraine, his future likely now all depends on the outcome of the war. The job he has been given is “the most poisoned of chalices,” according to Mark Galeotti, an expert on the Russian military. “It’s now on him,” he added in a tweet.

Every Russian general “must receive at least one opportunity to fail in Ukraine,” it tweeted.