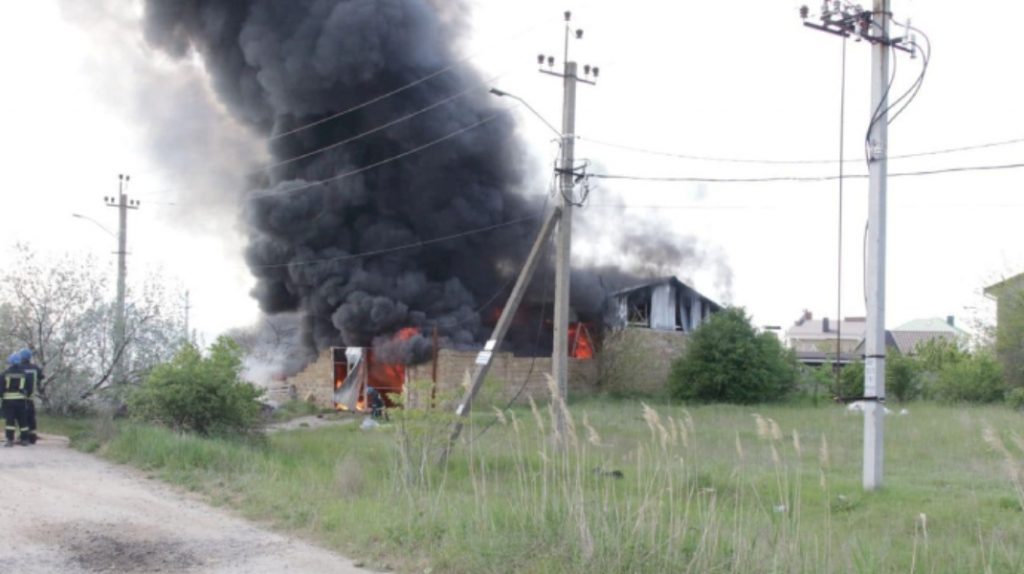 On the night of the 22 of May, Russian troops launched missiles at the civil infrastructure of one of the villages in the oblast of Zaporizhzhya. According to the preliminary data, there are victims, rescue services are working there now, says the Regional Military Administration of Zaporizhzhya.

Russians were trying to break into the city of Severodonetsk, but were repulsed and retreated to their previous position, reports Serhii Haidai Regional Military Administration’s chairman

As a result of the shelling at least 26 civilian buildings were damaged in Luhansk oblast. In addition, the bridge span between Severodonetsk and Lysychansk situated near the railway station is ruined.

Ukraine was represented by 93 participants in 17 sports types, they were in the top ten at the competition among 63 countries.

11 people got injured as a result of firing the city and oblast of Kharkiv, – reports the head of HOVA Oleh Synyehubov

Six people were killed and 10 others injured in the Donetsk Region overnight, police have said.

The occupants shelled 12 populated areas. More than 40 residential buildings, a school, a music school, an institute, enterprises, and life support facilities were damaged.

Ukraine needs the American multiple launch rocket systems, to unblock the Black Sea as well. – Head of the Office of the President Andrii Yermak.

“Bargain with a country that has taken hundreds of millions of people hostage? We have a better idea: the world should agree on the transfer of MLRS systems and other necessary heavy weapons to Ukraine to unlock the Black Sea. The rest we’ll do ourselves.” – direct speech.

“There is no limit to the cynicism of the invaders. After clearing the rubble from the Drama Theatre and opening the square for free access, the invaders staged a “rally of volunteers” with red flags around the city. The final point was a tour inside the Drama Theatre. Real feasting on the bones.” – direct speech.

Russians shelled the community in Kharkiv with the cluster munitions and missiles from helicopters – says Head of Derhachi community Vyacheslav Zadorenko.

“Districts of Prochodivskyi, Kozacha Lopan, remain under occupation, a mayor part of Tokarivskyi district, the village Tsupivka of Prudianskyi district and Nove of Rusko-Lozivsky.” – direct speech.

Russian troops launched a rocket attack on Malyn in the Zhytomyr region.

“The explosions were in Malyn. The information about this was confirmed to The Public by the city mayor of Malin.“

“Now it is the Bereznevatskaya and Shirokovskaya communities and the city of Mykolaiv that are getting the most damage. Once again residential houses have been destroyed. Fortunately, there are no children among the victims. – quote.

“Attention. Today an enemy missile was shot down by the air defence forces over the Fastovsky district. Preliminarily – no casualties and destruction. The information is being clarified.” – quote.

Dnipropetrovsk region: the occupiers hit a rocket over the river. – Pavel Reznichenko, chairman of the Dnipropetrovsk OV in Telegram.

“We have an “incoming” in the Pavlograd district. The rocket hit the Samara river. The occupiers have started “denazification” of Ukrainian fish…” – quote.

Russian occupiers have detained Dvorichanska village head Galina Turbaba and are not releasing her for four days. – Oleg Sinegubov, chairman of the Kharkiv OVA, said.

“Before she was detained by the Russians, she has been under, shall we say, arrest for four days. This is occupied territory.” – direct speech.

Russian troops have once again shelled the border areas of the Chernihiv region. – Operational Command North.

“The enemy continues shelling the border areas of Chernihiv region. Today around 3:45 p.m. 6 “arrivals” were recorded from Russian territory near the village of Senkovka“. – quote.

Transnistria: the Russians wanted to rebuild a military airfield, but everything is stolen. – Head of the Odessa Regional State Administration (ORA) Maxim Markenko on Telegram.

“According to available information, the Russian contingent in Transnistria was tasked with restoring a military airfield and equipment in Tiraspol. But it seems that over the many years Russian troops have spent in Transnistria, all they’ve done is piss away what’s left of the military equipment and hardware. Therefore, it turned out that there is nothing and nothing to restore there. At the same time, according to the documents – all the spare parts are available“. – direct speech.

“The occupants are trying to advance in the Bakhmut and Donetsk directions. – A summary of the AFU General Staff as of 18:00.