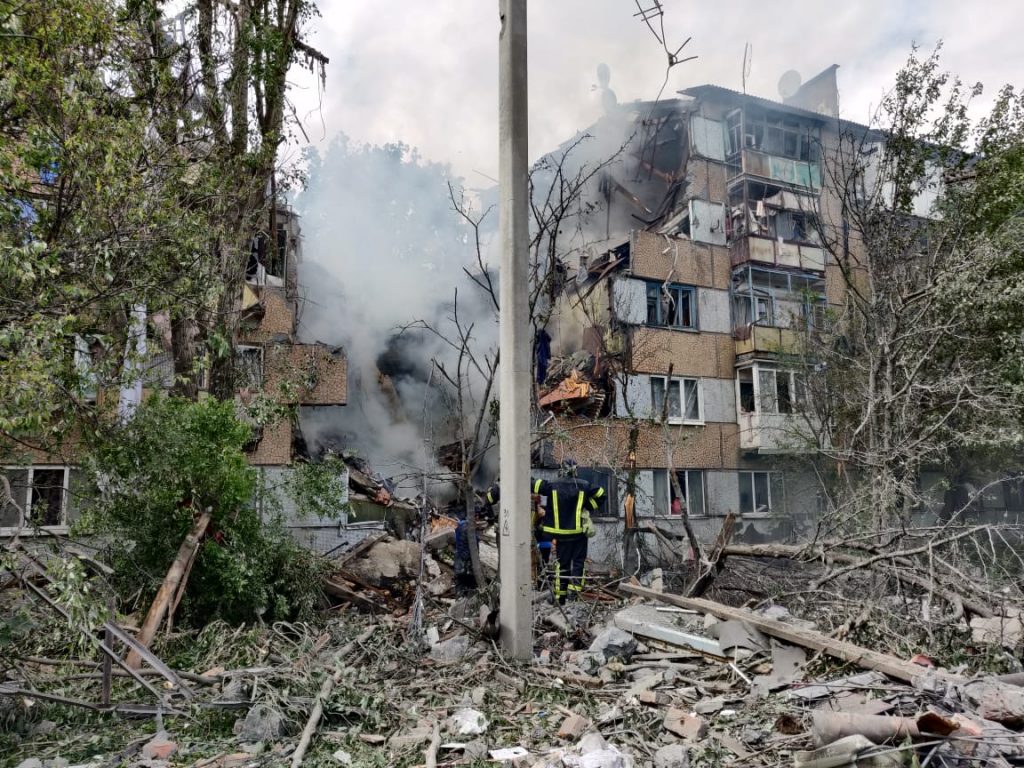 00:20
President Volodymyr Zelensky has said that  thanks to the military and the negotiation group of the International Red Cross Committee and the UNO Ukraine tries to save the military from the Azovstal plant. 221 servicemen were transported to the occupied territory for treatment and for further exchange, 53 heavy wounded were transported to the hospital in the ORDLO. 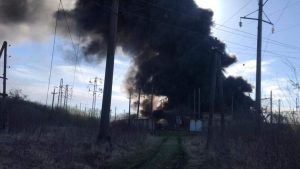 Ukrainian MLRS fire has extinguished the fuel storage near famous Chornobaivka. 29 russhists were tamed forever, Strela 10 MRLS and T-72 tank were liquidated together with other types of armored vehicles.

In the Severodonetsk direction near Syrotyne village the Russian occupants experienced losses and retreated. In some other directions they had no success in the offensive.

In the morning of May 17 Desna village in Chernihiv region experienced rocket shelling that resulted in casualties; some people were wounded.

Today at dawn the Russian troops shelled Okhtyrka in Sumy region with missiles. At least five people are wounded. 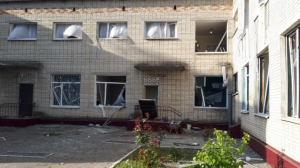 At night on May 17 the Russian troops committed rocket strikes at Lviv, Chernihiv and Sumy regions. Kharkiv eventually was not shelled, but Pervomaiske in Mykolaiv region, and some villages in the Luhansk and Donetsk regions experienced considerable destruction and casualties.

The Russian Federation plans to give the destroyed Mariupol to the governance of Kadyrov’s legionnaires. The city will be given to them together with the right on looting, Petro Andriushchenko, advisor to the Mariupol mayor informed.

Mariupol City Council has published a video of evacuation of wounded Mariupol defenders from the Azovstal steel plant.

The anonymous video shows men in camouflage uniforms and white arm bands (used by Russian troops) search wounded servicemen and those military who carry them on first-aid stretchers.

Denys Maliuska, Minister of Justice informed that from the beginning of the war 363 persons from Ukrainian prisons were liberated after they had expressed willingness to go to the front line. 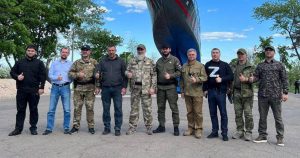 In general three amnesties have taken place as of the moment. According to the report those released were only undangerous individuals truly sent to the front line. After the war all the pardoned individuals will not be put back to prisons.

The occupants try to attack the state border once again near Seredyno-Buda village in the Sumy region. Near Sopych village 6 blasts were registered and around 70 blasts were heard in direction to Boyaro-Lezhachi.

A combat continues in the north of Shostka district. Along the border line one could see blazes caused by shelings. 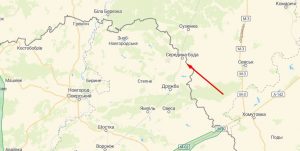 One more suspect in forceful rapes of women in the Kyiv region has been identified.

According to the reports the second discovered Russian rapist is 20-year old Bulat Fassakhov, radio-telephonist  of the howitzer division of the 30 separate motorized infantry brigade, 2d combined-arms army , Central Military District, The Russian Federation. The identification of the rest of suspects in military crimes continues. 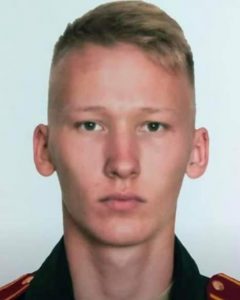 Local entrepreneurs are forced to open the hotels, cafes and shops to create “safe and comfortable” conditions for the holiday-makers.

The Russian troops have shelled the bridge over Dnister firth in the Odesa region for the fifth time now. Reparation is impossible as well as the operation of the bridge. – The South Operational Command.

Today police patrol have evacuated 36 people from Severodonetsk and Lysychansk; 6 persons out of them are children. Near the refinery and near Volodymyrivka the bus was shelled by the Russians. Despite that all the rescued are fine and in safety. Today in total 76 people were evacuated from the region.

A missile strike had ruined a 5-storied building in Bakhmut, and caused a fire, the Donetsk oblast Military administration informed.

A heavily wounded nine-year old victim was rescued from the ruins. There might be other people under the ruins, the rescue operation continues. 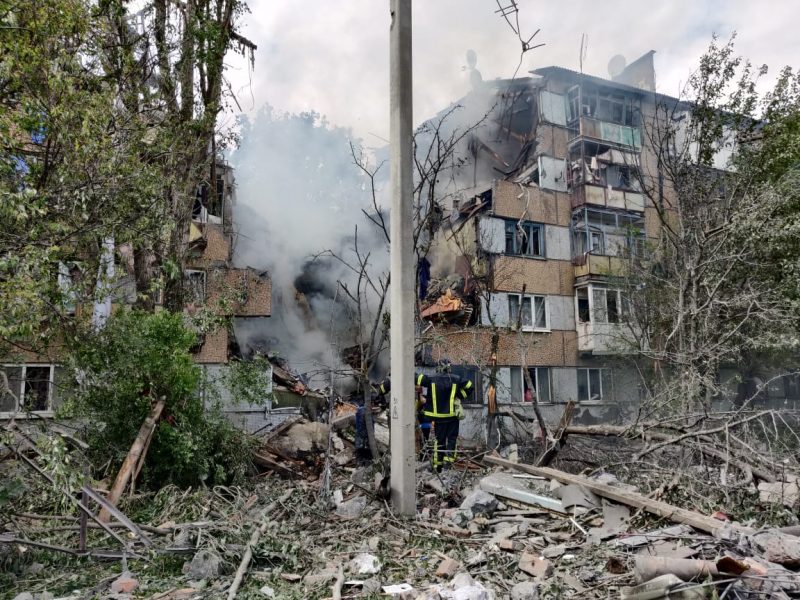 ​​ Russia may impose a ban on the exchange of Azov soldiers.

Tomorrow the State Duma plans to review a bill about prohibition to exchange of the “nazi crimes”, while on May 26 the Supreme Court will discuss the recongnition of Ukrainian Azov batallion as a terrorist organization.

Occupants have destroyed the genetic bank of plants in Kharkiv, the only one such bank in Ukraine. It had been storing more than 160000 spices and hybrids of plants from all around the world. 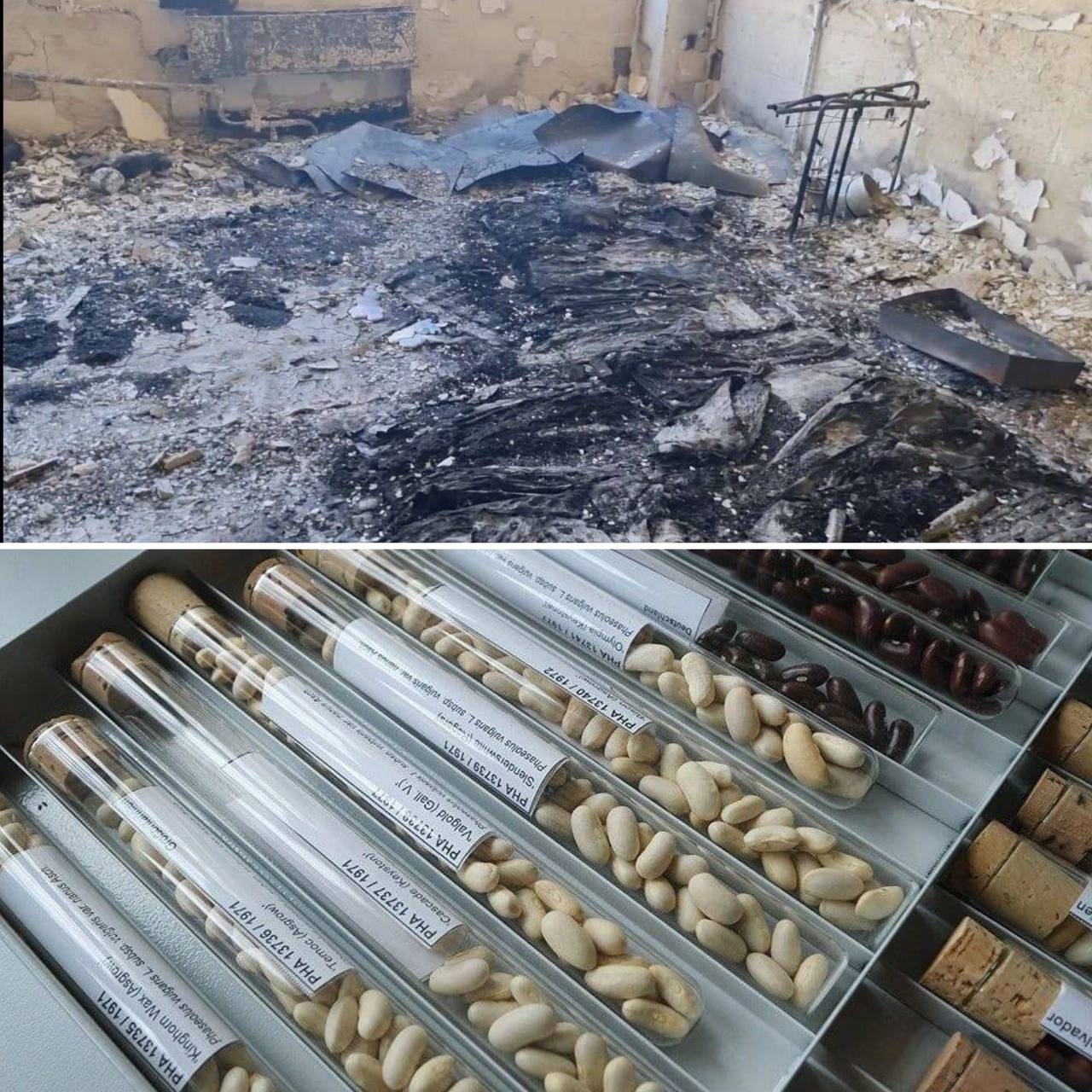 In the Lviv region in Novoyavoriv community many private houses, a kindergarten, an outpatient clinic and the local warden”s center are destroyed by Russian missile strike.

In Mariupol the spread of infectious diseases is possible due to damaged water supply and sewage systems, the WTO representative Dorit Nitzan reported.

Ms.Nitzan stated that although the water supply in Mariupol is partially restored but many pipelines are damaged. Non-governmental organizations informed that the city streets look like “a swamp where sewage water is mixed with the potable one”. This creates a huge threat of many infections, including cholera.

“The war is entering into the protracted conflict phase”, -the Minister of Defense Olexiy Reznikov published in his Fb.

”In the Kherson and Zaporizhia regions the occupants carried out fortification works to be prepared for the defensive measures”, he stated.