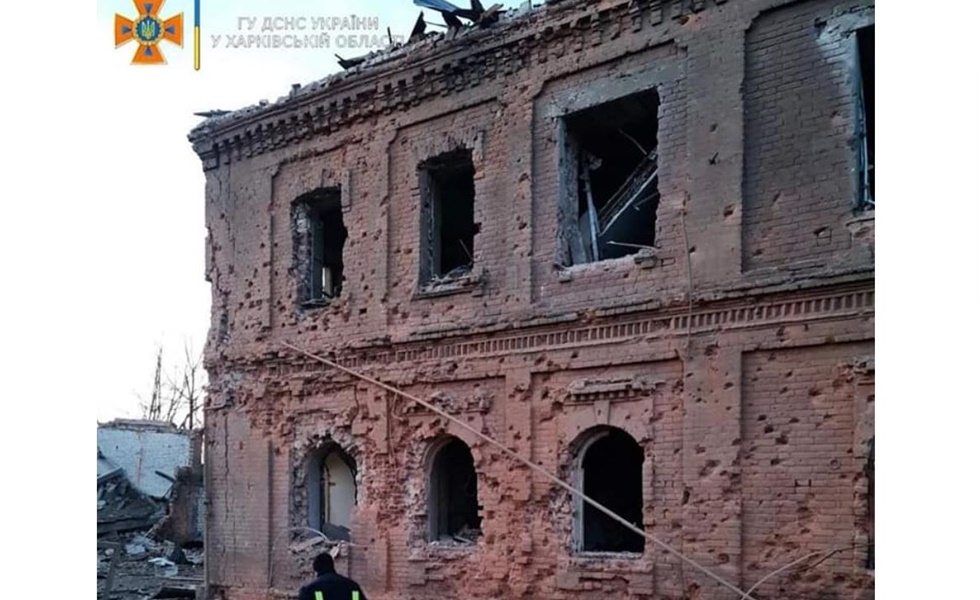 According to the European Commission, 3,8 million Ukrainian refugees crossed the EU members’ borders, but the real number could be higher.

She noted that the number of refugees arriving in the EU had become lower. Earlier, 250,000 people arrived to the EU daily, but now it reduced to 40,000.

Yet, the Commissioner believes that the EU must draw up a plan in case of the number of refugees increasing.

“The war still continues, and nobody knows what Putin might do next. So the European Union has to be ready to accept millions more Ukrainians who might need to exit the country,” noted the European Commissioner.

Occupants keep actively concentrating vehicles and ammunition, stated the speaker of InformNapalm Mykhaylo Makaruk as a guest during the broadcast of “Channel 24”.

He said that there were currently more vehicles in Kursk oblast than there had been before the invasion, but it was unclear whether these vehicles were properly functional.

Russia might stop supplying natural gas to Europe in case it refuses to pay in rubles. The aforementioned is a demand of Russia, stated the Press-Secretary of President of Russian Federation Dmitry Peskov.

“Ukrgazbank” offers 100,000 rubles to every occupier who will surrender along with weapons and vehicles.

“We understand that these are guests from the past, Russia no more has Visa and Mastercard systems, so the payments will be made in cash. This money has no value to us, we have nothing left to do with it but for burn it, but that’s harmful to the environment,” explained the bank representative.

Since the beginning of a full-scale Russian invasion in Ukraine, more than 510,000 citizens have already returned to Ukraine, of which approximately 75-80% are men, Ukrinform reports, citing Andriy Demchenko, a representative of the State Border Service. According to the UN, during this time 3.8 million people left Ukraine. The number of internally displaced persons has already reached 6.5 million. And another 13 million people are locked in war zones, unable to leave their homes.

The governments of several Asian countries are preventing demonstrations in support of Ukraine under the pretext of quarantine restrictions, said Natalya Poshivaylo-Toller, Vice President of the World Congress of Ukrainians in East, South, and Southeast Asia, Oceania, and Africa.

An airstrike was carried out at an object near Nikopol, head of the Nikopol Regional Military Administration, Yevgeny Yevtushenko, said. There are no victims.

As of the morning of March 29, since the beginning of Russia’s full-scale invasion of Ukraine, 144 children have been killed, and more than 220 have been injured, as reported by the Office of the Attorney-General of Ukraine.

As a result of bombing and shelling, 773 educational institutions were damaged, of which 75 were destroyed.

Russian invaders damaged an architectural monument in Kharkiv – the fire station built in 1887, reported the State Emergency Service of Ukraine.

It is noted that the building has historical significance to the city and firefighters. Rescuers are currently clearing the rubble to prevent further collapse of structural elements.

Russian troops shelled Mykolaiv on the morning of March 29 and damaged a building. The rescue operation is underway.

“They waited until people went to work and then hit a residential building,” said the head of the region, Vitaly Kim.

In Mykolaiv, invaders destroyed the building of the regional administration. According to the State Emergency Service, there was a destruction of the central section of the building from the 9th to the 1st floor, but there was no fire. 9 injured people were recovered from the rubble.

“We’re clearing the rubble. They destroyed half of the building, my office was damaged a bit, too. Concerning the victims: thank God, most miraculously escaped – from 50 to 100 people. Now we are searching for eight civilians and three military men,” said the head of the Nikolaev OVA Vitaly Kim.

Dmitry Kuleba urged to ban the use of the symbol Z. The head of the Ukrainian Foreign Ministry announced this on Twitter.

“I call on all states to criminalize the use of the ‘Z’ symbol as a way of publicly supporting Russia’s war of conquest against Ukraine. ‘Z’ stands for Russian war crimes, bombed cities, thousands of Ukrainians killed. Public support for this barbarity must be banned,” Kuleba wrote.

“As I understand, when I smile, it infuriates the orcs…” Kim said.

Nearly 400 people had died in Chernihiv, announced the mayor of Chernihiv Vladyslav Atroshenko on the air of the national TV marathon on March 29.

“We have already lost 350 people in the city. This is not final data. We have reappointed the Head of the Regional Health Department, so I hope there will be more precise figures. I think that the number is already approximately 400 people. I personally know half of these people, it is very difficult to endure all this,” Atroshenko said.

A fire at an oil depot in Rivne that broke out as a result of a Russian missile strike, is now being put out.

In Rivne region, fire extinguishing at an oil depot hit by the enemy missile is continuing. The background radiation and chemical contamination levels are within normal. There are no casualties, the press office of the Ministry of Internal Affairs of Ukraine reports on Facebook.

A journalist from Zaporizhzhia Iryna Dubchenko was forcibly taken by Russians to Donetsk for “trial”.

The Russian invaders took her to Donetsk “to carry out investigative actions in connection with the harboring and supporting Ukrainian soldier”.  Iryna Dubchenko  is a well-known journalist, who had been earlier detained in Zaporizhzhia region.

The news was announced on Facebook by the Head of the National Union of Journalists of Ukraine, who had received this information from the journalist’s sister.

The key accusation brought against Iryna is harboring a seriously wounded Ukrainian soldier in her house. The journalist was detained on March 26.

Russian troops launched missiles at an airfield in Khmelnytsky region.

In Khmelnytsky region, Russian troops launched a missile attack on the airfield. As a result, fuel reserves were destroyed, the Mayor of Starokonstantinov Mykola Melnychuk reports.

“We have been bombarded with missiles since the first day of the war, but today the attack has been very serious and caused significant damage,” the report says.

According to Melnychuk, there were no casualties as a result of the shelling.

During the peace talks that took place in Turkey, Russian troops continued to shell peaceful cities and towns in Ukraine, Lyudmila Denysova, the Commissioner for Human Rights of the Verkhovna Rada of Ukraine states in a Telegram.

“Mortar fire in Chernihiv. They fired from a distance of more than 5 km to the administrative boundaries of the city. Such a distance makes targeted strikes impossible, the goal of the invaders was to shell the civilian population, ”she informs.

Johnson: “Ceasefire in Ukraine will not be enough to lift UK sanctions against Russia”

“He [Johnson] said that the pressure on [Russian President Vladimir Putin] had to be stepped up, both through further economic measures and through military assistance, in order for Russia to reverse its course,” his spokesman said.

The Russian invaders forcibly took the staff and patients of the city maternity hospital No. 2 from Mariupol to the territory of the aggressor country, Mariupol City Council announces in Telegram.

“More than 70 people were forcibly taken out of maternity hospital No. 2 in the Levoberezhny district – these people are medical personnel and patients,” the report says.

The City Council emphasized that Russian troops continued to cynically deport people to their territory, and more than 20 thousand Mariupol residents were reported to have been taken to Russian territory against their will. Citizens of Ukraine are deprived of their identity documents and sent to the so-called filtration camps. Then they are redirected to remote cities of Russia.

As previously reported, the staff and patients of the city hospital No. 1 had been deported too. Nearly 600 Mariupol residents had been in the hospital at that time.

“1,179 civilians have died in Ukraine since the beginning of the Russian invasion,” UN reports

Also, since the beginning of the full-scale Russian invasion of Ukraine, 1,860 civilians have been injured, the Office of the United Nations High Commissioner for Human Rights (OHCHR) adds in the report.

At the same time, OHCHR believes that the actual figures are significantly higher due to the impossibility of obtaining timely information in the area of ​​intense fighting.

The number of casualties as a result of Russian missile attack on the Mykolaiv Regional State. Administration building has reached 33 people, 12 people died, press office of the Ministry of Internal Affairs reports on Facebook.

“As a result, the central section of the building from the 9th to the 1st floor was destroyed, without subsequent fire,” the report says.

State Emergency Service of Ukraine rescued 18 people from the rubble. They were then handed over to the paramedics.