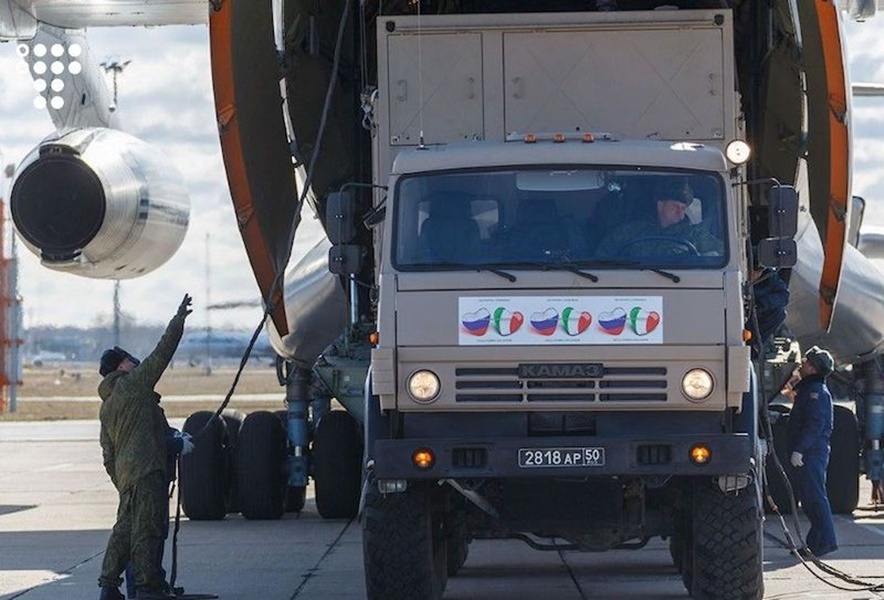 The Ministry of Defence of the Russian Federation started preparing intensive care units in a hospital in Italy. The state-aggressor entrenches itself in a NATO member state. In the meantime, one former US official in a CNN interview classifies the deployment of Russian medical equipment to New York as a “propaganda win” for Moscow.

“When some crisis occur right-wind groups instinctively assemble in unions”, explained Michael Berg in his witty remark. These days we witness vindication of this belief recalling decisions of Donald Trump and Giuseppe Conte. States whose leaders are those two individuals became the first objects, or rather targets of the special operation, which as previous practice tells us should is carried out by the Army. The so-called “humanitarian aid” Russians deliver not on conventional, but on military aircrafts. Furthermore, it turned out that the “aid” has to be paid for. For some reason, instead of civilians military doctors were sent to Italy. There is still no data about the actual goals and skills of the “medics in uniform”. Possibly that eventually they will show themselves a bunch of ridiculous decorations just as everything else Putin acts up to tease his opponents.

However, this appears to be connected not solely with the Kremlin`s intention to demonstrate its “revived power”. Moreover, perhaps, what we discuss is secondary. The issue is rather the fact that Moscow administration hasn`t still freed its mind from “times of generals epaulets”. Russia got stuck somewhere close to ​“Stalin`s values” and simply doesn`t imagine any other methods of international cooperation, except for sending military aircraft to foreign territories. Some of them were invented to carry bombs, while others, as we now know, mechanical lungs ventilation.

The roots of this approach, applied by Kremlin in relations with New York and Bergamo, should be sought much deeper in the fundamentals of the Russian state structure. The essentials there are rather militaristic than civilian. If we put on googles and look closer at the core of the entire political, socioeconomic and national culture of Russia, you will find everywhere the footprints of infantry. Starting from the school desk, where one has to study the series of filthy victories of Suvorov and Marshal Zhukov, and up to the nearest underground station, where a long snake rattles and lifts employees of the Ministry of Internal Affairs.

The “meaningless and ruthless” call of duty is a priceless “school of life”, inherited from tzars to the USSR general secretaries. Military call, however, is just the tip of an iceberg. Wasn`t enough that the leadership in the country is monopolised by the “security forces” who went through bullying, without a “military faculty” document in Russia, your “social lift” simply struggles to open a door for you, not to mention lifting you up. In the Russian hierarchy, an academic is doomed be a slave to a man with a weapon.

The Donbass, a region occupied by Russia is literally controlled by people with assault rifles and this case reflects the described above model, however, on steroids, close to its “quintessence”. To be on the safe side, so-called “LDNR” is not the only quasi-state entity controlled by belligerents in the world. The difference between the one at issue and some region in e.g. Somalia, is that in fact we face a “sub-scale” military empire, a “small Russia”. Project “Malorosiya” is a projection of a “big brother”, its sprout and tries to show actual faces of the “indigenous people”. This is what possible happens in the nightdreams of Zhirinovsky, where he allows himself to build the “land of his dreams” in a designated geographical area.

You`d think a similar fate cannot threaten civilized countries. Nevertheless, there is a problem which lies in the fact that metastases of Kremlin militarism affect only societies with scarce intelligence, just as cancer cells grow in an organism with weak immunity. The East of Ukraine has already been dispatched by this “political oncology”. Over the past years, a few attempts have been made to infect the West. Not to say that they were too successful, however, a certain “progress” is already evident. The green light Moscow got in the two western powers is another extremely alarming call for all of us. Anyone who considers the “Donbassisation” of Western countries at issue impossible should pay attention to the fact that Russian riffles “Kalashnikov” (AK) are already somewhere in Lombardy, Italy.  Not for a short period mission, but for a long time, given the indefinitely long period of the current epidemic.

The coronavirus itself is not as terrible as the “political” virus infused in Russia for years. Together these two hazardous infections may penetrate into Euro-Atlantic societies that are weak and fragmented now. In such emergency situations, propaganda narratives about “the same boat” and “the spirit of partnership” seemed not to work, but the plebes lap up whatever leaders throw at them. In the meantime, temptation to make a deal with barbarians and regress to earlier civilization steps is stronger than ever. The current global crisis is a sack full of probabilities, not guarantees. Anyone who expects the Russian regime to decline after COVID-19, forgets that Western values ​​are living in people who are not everlasting.

Let`s recall that the World War II did not end with the triumph of liberalism, but with a bloody victory of Stalin, who pridefully stood next to Roosevelt and Churchill. This “victory parade” is the victory of the militarists over civilians and we are bearing this pattern up to this day. Arranging marches on Red Square, Putin himself never got tired to remind us that this old-known battle is far from over. The division of the world into “spheres of influence” that occurred after the end of the world warfare plunged a huge number of regions into the “prison of peoples”.

They managed to get rid of slavery not at the peak of the international crisis, but at the peak of world intellectual progress, these steps are accompanied by video recordings on which the American Tomahawks destroyed the objects of Saddam Hussein.

Despite everything, we live in a time when not only self-isolation at home is required, but also mental isolation is a “must have”. Isolation from the virus of Warlordism is crucial as even before any pandemic hit the world, this infection culled “old democracies” one after another. The current period is a great occasion to rethink the idea to close all borders and terminate passage. Unfortunately, some politicians built “their walls” where there is no need in them.