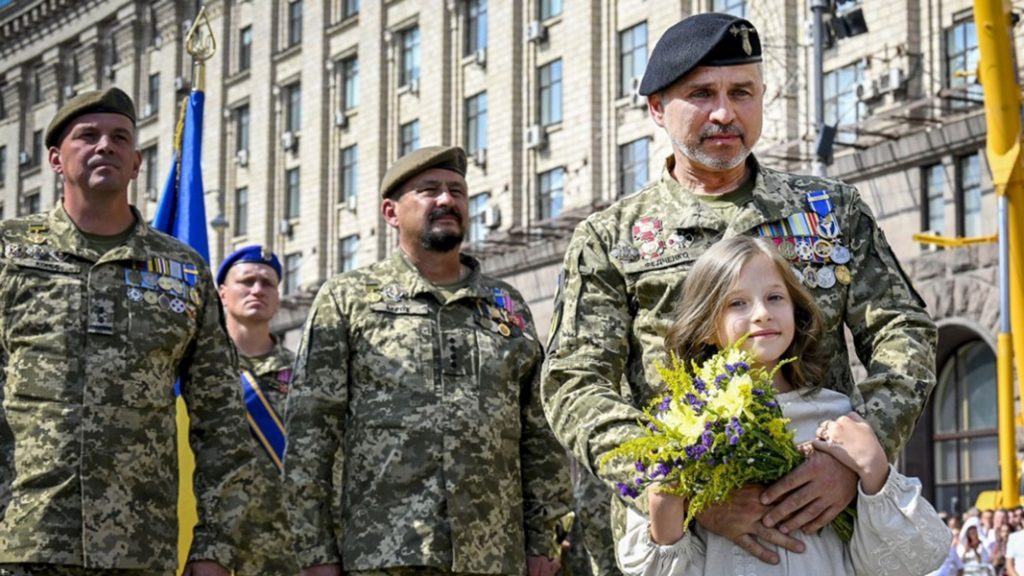 Russian President Vladimir Putin has issued a stark ultimatum. In a number of recent statements, he has demanded that the United States make “reliable and firm legal guarantees” that NATO will not expand eastward—or else, his entourage has hinted, Russia will invade Ukraine. Coming at a time when Russia is massing military forces along the Ukrainian border and stymieing peace talks to end the war in the Donbas region, Putin’s demand seems to offer a tempting prospect for the West: in exchange for merely cementing the alliance’s status quo, a deadly European war could come to an end and a new, even more devastating conflict could be avoided.

But it is foolish to think that providing such a guarantee would make Putin any less aggressive. History shows that pledges of neutrality by Ukraine or any other country in the region do nothing to abate Putin’s appetite; rather, they feed it. The best way to respond to such ultimatums is to ignore them altogether.

What cannot be ignored, however, are Putin’s increasingly aggressive intentions. Not only is a new large-scale invasion of Ukraine now on the table; Putin also hopes ultimately to rearrange Europe’s security architecture to the detriment of the West. For too long, the West has declined to take Putin’s ambitions seriously and responded with delay, indecision, and weakness. It is time to meet them with strength.

It is obvious why Russia demands that Ukraine give up its ambitions for membership in the European Union and NATO, but it is far less clear why anyone in the West should echo these ill-conceived suggestions. The people of Ukraine made a choice in 2013, after Ukrainian President Viktor Yanukovych, acting at Putin’s behest, sought to contravene public opinion and integrate the country with Russia instead of the EU. In November of that year, Ukrainians took to the streets in the so-called Euromaidan protests. Yanukovych tried to suppress the demonstrations with brute force, but he underestimated the will of Ukrainians, who responded with fury, not fear, and eventually ousted him.

The message could hardly have been clearer: Ukrainians have no interest in cozying up to Russia and will never give up on integrating with the West. Putin, however, seemed not to have learned that lesson. With his client out of power and no way to change Ukraine’s orientation from within, the Russian president resorted to violence. In early 2014, Russia invaded Ukraine, occupied Crimea, and launched a deadly war in the Donbas.

Russia planned a blitzkrieg with the ultimate goal of dividing Ukraine in half and establishing a puppet state called Novorossiya in Ukraine’s eight eastern regions. But Putin greatly underestimated Ukrainian resolve. Tens of thousands of Ukrainians from all regions and all walks of life raced to the frontlines to take up arms in defense of their country. They were backed by hundreds of thousands of civilian volunteers, ordinary Ukrainian citizens who supplied the army with everything from food to do-it-yourself armored vehicles. It became clear that Putin hadn’t attacked the defenseless state he had imagined; the Ukrainian people, however poorly equipped, were highly motivated. Putin’s grand designs quickly fell apart, leading to a years-long stalemate on a tiny fraction of land near the Ukrainian border. To date, the conflict has claimed more than 14,000 lives.

The West—the United States, the European Union, and NATO—did too little, too late. It took months and the deaths of 298 innocent people on Malaysia Airlines Flight 17, shot down by a Russian missile in July 2014, before serious economic sanctions were imposed. Little by little, the West isolated Russia and adjusted its policies. But its indecisiveness invited more aggressive actions from Russia, such as cyberattacks, election meddling, and targeted assassinations of opponents abroad.

In the years after Russia’s intervention, Ukrainians doubled down on their choice to align themselves with the West. In 2018, they enshrined the goals of EU and NATO membership in the Ukrainian constitution—a strategic course that is becoming more popular by the year.

The fallacy of compromise

Putin has taken notice of these yearnings and, perhaps not surprisingly, is now suggesting that Ukrainian neutrality is key to resolving the crisis. But history gives the lie to this claim. Back in 2014, Ukraine was a neutral country, both on paper and in reality. Four years earlier, it had formally put an end to its ambitions for NATO membership when it passed a law clearly stating that it was a nonaligned country that had no intention of joining any military alliance. There was no nationwide public discussion of NATO membership back then, either; the Euromaidan protests that began in 2013 centered not on the military alliance but on economic and political integration with the EU. If neutrality failed to stop Putin from launching a war in 2014, it is hard to see why it would stop him now.

Another ill-advised idea proposed by some experts is to pressure Ukraine into one-sided concessions, granting compromises that will supposedly make Putin more pacific. Namely, Moscow has long demanded that Kyiv talk directly to Donetsk and Luhansk, the two Russian-occupied regions in the east of Ukraine. Ukraine has rejected this demand, and with good reason: Russia is a party to the conflict, and we are not going to let it present itself as a mediator.

Moreover, history suggests that giving in to this sort of demand is unlikely to satisfy Russia. In 1992, a war intensified in Moldova’s Transnistria region, a post-Soviet conflict that pitted Russian-led forces against the government of Moldova. Even though Russia had fueled the conflict, it demanded that the Moldovan government talk directly to the breakaway region, with Moscow playing the role of mediator. Moldovans agreed and engaged in a direct dialogue with Russia’s proxies in the hope that doing so would resolve the standoff and restore their territorial integrity. In 1994, in another attempt to end the dispute, Moldova officially adopted a neutral policy, declaring that it wouldn’t seek NATO membership. The result of both concessions? A three-decade-long frozen conflict with no thawing in sight. Russian troops and weapons remain in Transnistria to this day.

Putin’s calls for a guarantee concerning NATO expansion present a dilemma. If the West gives in, Russia will no doubt be pleased with its newfound veto over Ukrainian foreign policy and NATO decision-making. If the West rejects its demands, Russia will be equally happy, because it will be able to lay fresh ideological ground for invading Ukraine again.

Since 2014, Russia has legitimized its aggression in Ukraine by referring to a promise the West supposedly made at the end of the Cold War and then broke. According to this narrative, during negotiations over German reunification in 1990, U.S. Secretary of State James Baker pledged to Soviet President Mikhail Gorbachev that NATO would never expand eastward. This account is a fairy tale, as even Gorbachev has admitted. But more problematic for Putin, it has become stale, which explains his interest in a new story line. By having his current proposal for guarantees about NATO rejected, Putin hopes to spin a much fresher ideological myth.

The fact that Putin is searching for a new ideological justification concerning Ukraine suggests that he really is on the verge of something big: an attempt to fundamentally rewrite the post–Cold War security order in Europe. Having created a crisis, he hopes to invite U.S. President Joe Biden to the negotiating table to solve it. There, he imagines, the two leaders will draw new lines across Europe, partitioning the continent into new spheres of influence. Moscow has fantasized over such a scenario for years.

Russia is a master of selling lies, and its illegitimate demands for guarantees and one-sided concessions are just that. But we don’t have to buy what we’re being sold—or even acknowledge the offer. The West shouldn’t appease Russia by agreeing to negotiate over NATO, nor should it give Russia the satisfaction of rejecting its ultimatums. Rather, the West should simply ignore them, continuing to hold further rounds of talks while refusing to bow to Putin’s ultimatums on Ukraine and NATO.

Meanwhile, the United States and its European allies should strengthen their efforts to deter Russia. Unlike appeasement, deterrence has a successful track record. In the spring of 2021, for example, Russia began its massive buildup along the Ukrainian border and spouted belligerent rhetoric threatening to destroy Ukraine. Ukraine’s partners signaled staunch support for Ukraine in public and behind closed doors, and Moscow was forced to ease tensions.

The only effective way forward is the comprehensive deterrence plan that Ukraine and its partners are currently crafting. The first component is to send clear political signals to Moscow. That means making it plain that Ukraine is part of the West and a future member of the EU and NATO and that Ukraine’s sovereignty and territorial integrity are non-negotiable. The second part of the plan involves consequences: in the worst-case scenario of an invasion, the West will enact severe sanctions. Crafting these devastating measures now could spare the West the need to apply them later.

The third and final part of the plan is to deepen military assistance to Ukraine. We have our own capable military forces in Ukraine, and we don’t expect Western countries to put boots on the ground. We do, however, need more weapons to be able to defend ourselves. Everything counts, from ammunition to medical equipment, but we are in particular need of air and missile defenses.

Ukraine’s goal is simple: peace through strength. For now, the United States and its European allies should talk to Putin to win time while strengthening Ukraine to the extent that Russia will simply have no feasible military option for invading it. At that point, it will be possible to reach a just peace settlement for the Donbas and to finally bring Ukraine into the EU and NATO.

Both goals may seem distant now, but in the long term, the Ukrainian people will have it no other way. We will not abandon this course, no matter how much pressure we face from Russia—or from our U.S. or European partners. When I hear some Western commentators saying that NATO’s proximity is a sensitive issue for Putin, I have only one question to ask: Are the lives and future of 44 million Ukrainians not sensitive, too?

Dmytro KULEBA is Minister of Foreign Affairs of Ukraine