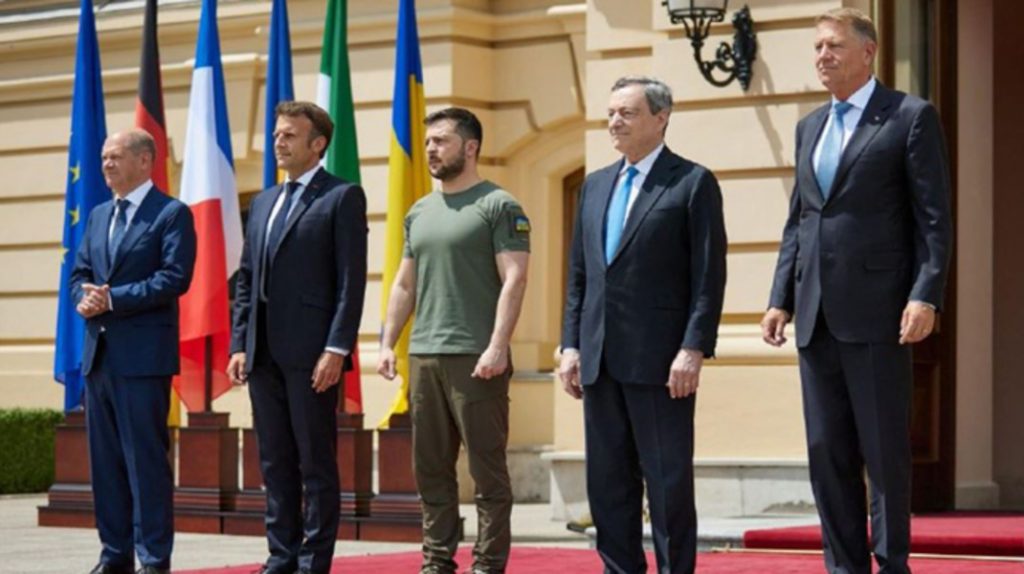 The arrival in Ukraine of Italian Prime Minister Mario Draghi, French President Emmanuel Macron and German Federal Chancellor Olaf Scholz, which took place on June 16 this year, was the first visit of such a high delegation of EU leaders after the start of blatant Russian aggression,  Nowiny polskie has said.

And it’s not that the arrival in Kyiv of a respectable foreign delegation was completely unexpected. Despite the fact that the exact dates of the trip and its route were kept secret for security reasons, the fact that Scholz, Macron and Draghi were planning to visit Kyiv became known as early as June 11. As noted by sources in Ukrainian and French government circles, Berlin and Paris have been negotiating a joint visit for a long time, and the idea to take Draghi with him belonged to the French side. The German newspaper Bild am Sonntag also previously reported on the planned visit of officials, and on the the Italian La Stampa on June 13 it informed that European leaders would visit the Ukrainian capital on the eve of the G7 summit, which is scheduled for the end of June, and would arrive with «specific travel plan. It was this mysterious “travel plan” that caused such a stir among Russian propagandists.

Judging by the publications in the Russian media and propaganda information resources, the Kremlin had certain far-reaching hopes for the Kyiv summit and considered it as an opportunity to find a way out of the stalemate that arose due to the inability to achieve at least the minimum declared goals in the so-called “special military operation” in Ukraine, and the growth in Russian society of social tension caused by an avalanche of economic problems associated with the international sanctions. 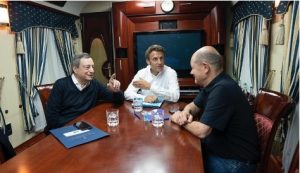 In order to level negative trends and support the authorities, the theses are constantly pouring into the ears of ordinary Russians that the West is also not doing well with the economy, and their problems far exceed those of Russia. However, such theses must be supported by at least some facts. Therefore, the Russian media presented the visit as demonstration of a deep “crisis” in the West and a sign of the so-called “Ukraine fatigue”. It has been argued that since the EU countries themselves suffer from the sanctions imposed against Russia, primarily in the energy sector, the unity of partners on the “Ukrainian issue” is now under threat. In this regard, the leaders of the leading European countries arrived with a «secret mission» — to inform the leadership of Ukraine about the impossibility of providing further assistance and to persuade them to negotiate with Russia on the Kremlin’s terms.

High-ranking guests visiti sity of Irpin and had the opportunity to see with their own eyes the real face of the Russian army, to be convinced of the numerous war crimes committed and committed by the Moscow horde in peaceful cities and villages of Ukraine. Also, the leaders of European countries were convinced of the determination of the Ukrainian people to resist aggression, to defend their freedom and sovereignty and independence of their state to the end.

Therefore, in the statements of European leaders it sounded convincingly that the West does not have any fatigue from Ukraine. On the contrary, it was about the fact that only Ukraine can independently determine when and under what conditions to sit down at the negotiating table with Russia. Interest was expressed in Ukraine being in the most advantageous negotiating position. At the same time, it was confirmed that the partners would continue to provide Ukraine with defence, economic and political support. 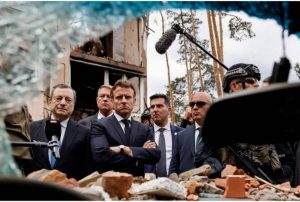 In particular, Olaf Scholz noted that Germany rejects peace on conditions imposed by Moscow unilaterally. The chancellor called the offer of such a peace «an illusion of Putin», who believes that he «can seize the land and wait for times to change.» The German chancellor believes that Russia should withdraw its troops from the territory of Ukraine and agree to peace talks. At the same time, it was noted that Germany would continue to provide weapons to Ukraine, as much as Ukraine needed it. In particular, the transfer of the IRIS system (air defense system) and multiple rocket launchers was announced. In addition, Scholz said that Germany wants a positive decision in favor of Ukraine as a candidate for EU membership.

Emmanuel Macron noted that Putin made a fatal mistake and let his country into a historical abyss when he attacked a neighbour, violated the border and territorial sovereignty. At the same time, the French President stressed that Germany and France would not demand concessions from Ukraine and the terms of negotiations and the format would be determined by Ukraine. In his opinion, the Ukrainian army should boldly, resolutely fight and European partners will help it in this. In particular, France intends to continue financial, humanitarian and military support to Ukraine and additionally provide the Ukrainian Armed Forces with 6 more Caesar self-propelled 155-mm howitzers.

In turn, Italian Prime Minister Mario Draghi said that the will of Ukraine in the matter of achieving peace is defining. The peace must be long-term and the way Ukraine wants to see it. At the same time, Draghi acknowledged that Ukraine must defend itself in order to achieve peace. He noted that Italy fully supports and will contribute to the investigation of war crimes, and will also assist in the restoration of Ukraine.