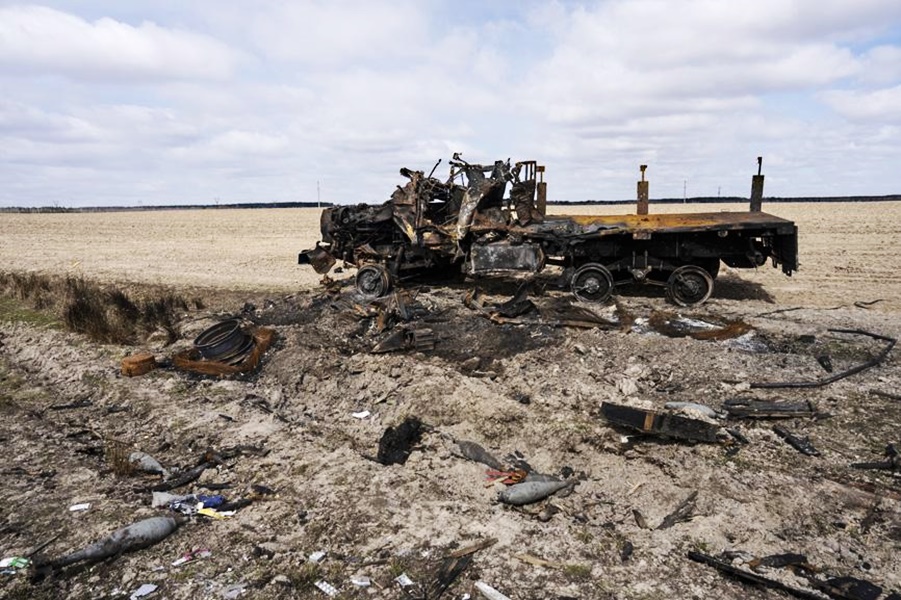 The Russian war against Ukraine is a threat to global food security.

Russia’s invasion of Ukraine poses serious risks to global food security and worsens global hunger that will require a range of responses from governments and international organizations. According to WFP, 811 million people go to bed hungry every night and 44 million people in 38 countries are teetering on the edge of famine.

Ukraine has become one of the biggest suppliers of foods such as sunflower oil, wheat and corn for the low-income countries worldwide as well as for the international development organizations. Ukraine has been meaningfully contributing to global food security and didn’t restrict exports of food even in the difficult times of the pandemic.

Experts emphasize that more than 400 million people in the world depend on grain supplies from Ukraine. Accordingly, the war in Ukraine poses a challenge to global food security, which is particularly acute today in some of the MENA region countries (Egypt, Yemen, Lebanon,  Israel, Libya, Lebanon, Tunisia, Morocco, Iraq, Saudi Arabia) and Asian countries (Indonesia, Bangladesh, Pakistan), which are the main buyers of wheat and corn on the world markets.[1] The population of most of these countries traditionally suffers from food shortages and even hunger.

According to the USDA data, Ukraine’s exports comprise more than 10% of all wheat, 14% of all corn and 47% of all sunflower oil in the world.[2]   90% of agricultural products are exported from Ukraine through seaports in the Black Sea and the Azov Sea[3].

During March world wheat prices soared by 19.7%, while maize prices posted a 19.1% month-on-month increase, hitting a record high along with those of barley and sorghum because of the war[4].

At the moment, grain exports from Ukraine have been suspended through the blockade of the ports by russian military. Currently, russia is blocking 57 commercial vessels loaded with agricultural commodities in the Black Sea (around 1.25 mln. tonnes of grain and oilseeds)[5] .  Ukraine is willing to continue its exports according to its international obligations, as we have grain (both corn and wheat) for export from the previous year’s yield. Unfortunately, we can use only roads, railway and Danube river ports logistics now. With the railways and road options, the possible amount of export is only 600,000 tons per month (from the pre-war 5-6 mln. tons)[6]. These export channels can cover no more than 15% of the monthly volumes of exports in agri-food through traditional sea ways. Border countries responded to the problem of grain exports from Ukraine to third countries and either has significantly simplified the procedures for processing cargo transportation or are actively working on this.

In February, 150,000 tons of grain and oilseed products along with by-products were exported by rail, with those volumes doubled in March.[7]

Ukraine currently has three export Dunabe port terminals that are functioning — Izmail, Reni and Ust-Dunaisk, but their capacity is very limited, compared with that of Odesa. The focus now is to enable a large increase in rail shipments.[8]

The task is to maximize the capacity of these routes. Local dry cargo players take stock of the hurdles they face in getting the country’s grain to market this year. Unfortunately, the alternative export routs for the main commodities can’t replace the traditional black seaports logistics and make the products even more expensive for the buyers.

The war has already affected about 25% of the world cereal trade and has caused an increase in world prices, food inflation and reduced access to food in the countries that import food from Ukraine. In particular, those are wheat and sunflower oil.[10]

The current situation in Ukraine

Ukrainian forecasts of agricultural exports in 2022 will be much more modest compared to the previous year due to the Russian aggression. In 2021, the Ukrainian exports of agri-food products accounted for $27.7 billion, whilst the forecast for this year is only $15.1 billion. This temporary breakdown is equivalent to the loss of 4% of wheat, 9% of corn and almost 30% of sunflower oil exports worldwide [11].

The spring sowing campaign has started. Despite the war Ukrainian farmers are in the fields. However, in the absence of timely input of fertilizers, the yields will be significantly lower.

As of now, more than 2.5 million hectares have been sown, which is about 20% of the forecast for this crop.[12]

Another great challenge for the Ukrainian agri-food sector which slows down all the processes is the human resources factor. The companies see the lack of field workers, drivers etc. due to the internal replacement and migration because of the war.

So, it is clear that military aggression of Russia in Ukraine caused both serious deterioration in the production system and in logistics (domestic and export).

There is now another widespread problem of soil contamination with unexploded ordnance, improvised explosive devices and spilled fuel. But the most significant challenge is certainly land mines. According to the recent assessments, about 13% of Ukrainian territory has been mined by Russians.[13]

Russian looters are stealing Ukrainian farm equipment and sending it back to their hometowns. In temporarily occupied territories, Russians often shoot farm animals before retreating.[14] This will make post war recovery significantly harder for farmers in the war-torn regions.

The disturbing developments are observed lately on the temporarily occupied by Russian aggressor territories in the South and East of Ukraine, where the Ukrainian farmers are reporting the stealing of the grain and other products like vegetables from the farms and unauthorized transporting of them to the Russian territories, as well as the pressure and intimidation of the agricultural producers to work for the occupiers or, in case of refusal to be killed.

— A large deficit of grain production and exports cannot be avoided.

— Due to the expected reduction in yields, and significantly decreased logistics capabilities, the probability of full-scale exports from Ukraine in the current marketing year is low.

— Further price increase for grain is to follow in the coming 3-5 years as the offer has already fallen significantly.[15]

— Due to the large aggregate volumes of lost exports, complete replacement by other suppliers is unlikely.

We have also discussed with WFP the possibility of the purchase of available surplus grain in Ukraine, in order to provide food for Africa and the Middle East, and thus prevent global hunger in these in regions, though the problem of the blocked Ukrainian seaports is still there to be solved.

In case of expediency

As the Arbitration Centre at the Russian Union of Industrialists and Entrepreneurs proposed to create an alternative «friendly» Russian arbitration for international economic activity in the agricultural sphere as well as appealed to trade in rubles, to stop using international rules and  promised discounts to «friendly» countries, we call on all parties to remain committed to international law and emphasize that any deviation from existing international mechanisms, rules and traditions will lead to chaotic consequences in the global food market.