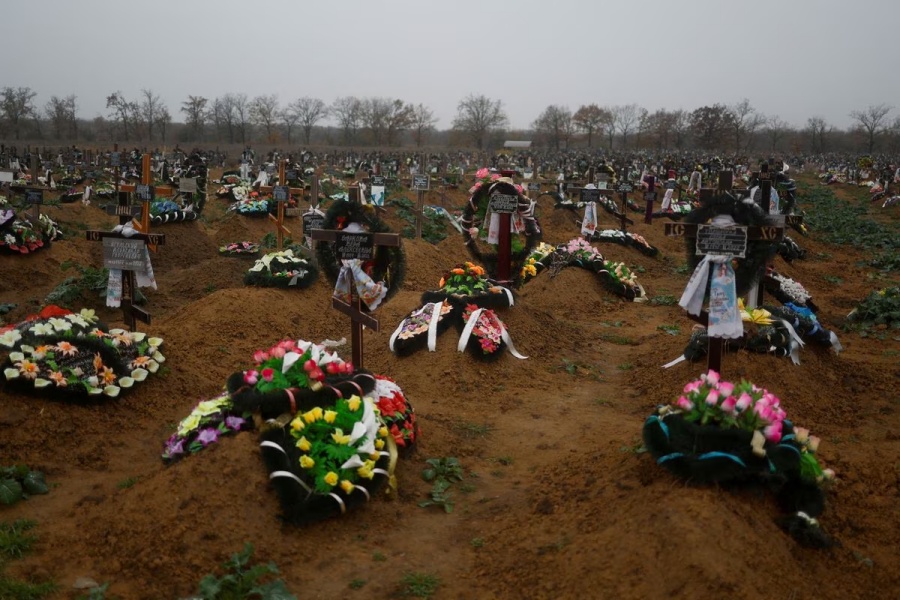 KHERSON, Ukraine, Jan 12 (Reuters) — Oksana Minenko, a 44-year-old accountant who lives in the Ukrainian city of Kherson, said she was repeatedly detained and tortured by occupying Russian forces, informs Reuters.

Her husband, a Ukrainian soldier, died defending Kherson’s Antonivskyi bridge on the first day of full-scale war, she said. During several interrogations in the spring, Russian forces submerged her hands in boiling water, pulled out her fingernails and beat her in the face with rifle butts so badly she needed plastic surgery, according to Minenko.The methods of the alleged physical torture administered by occupying Russian forces have included electric shocks to genitals and other parts of the body, beatings and various forms of suffocation, according to interviews with more than a dozen alleged victims, members of Ukrainian law enforcement and international prosecutors assisting Ukraine.Prisoners were also held in overcrowded cells without sanitation or sufficient food or water for periods of up to two months, some of the people said.

Reuters wasn’t able to independently corroborate individual accounts shared by Minenko and other Kherson residents but they fit with what Ukrainian authorities and international human rights specialists have said about conditions and treatment during detention, including detainees being blindfolded and bound, subject to beatings and electric shocks and injuries, including severe bruising and broken bones, forced nudity and other forms of sexual violence.“This was done systematically, exhaustingly” to obtain information about the Ukrainian military and suspected collaborators or to punish those critical of the Russian occupation, according to Andriy Kovalenko, the Kherson region’s chief war crimes prosecutor. 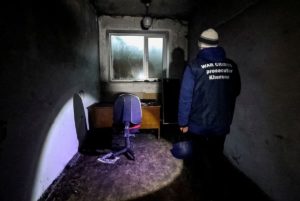 The Kremlin and Russia’s defence ministry didn’t respond to Reuters’ questions, including about alleged torture and unlawful detentions. Moscow, which has said it is conducting a “special military operation» in Ukraine, has denied committing war crimes or targeting civilians.

According to the most comprehensive figures to date on the scale of alleged torture and detentions, shared exclusively with Reuters by Ukraine’s top war crimes prosecutor, the country’s authorities have opened pre-trial investigations involving more than a thousand people in the Kherson region who were allegedly abducted and illegally detained by Russian forces during their months-long occupation.

The scale of alleged crimes in the Kherson region now emerging appears to be much greater than around the capital of Kyiv, say members of Ukrainian law enforcement, which they attribute to the fact that it was occupied for so much longer.

Ukraine’s top war crimes prosecutor, Yuriy Belousov, said authorities have identified ten sites in the Kherson region used by Russian forces for unlawful detentions. Around 200 people who were allegedly tortured or physically assaulted while held at those sites and about another 400 people were illegally held there, he said. Ukrainian authorities say they expect the figures to grow as the investigation continues following Russia’s mid-November withdrawal from Kherson city, the only regional Ukrainian capital it captured during its nearly year-long war against its Western neighbour.

Nationwide, authorities have opened pre-trial investigations into alleged unlawful detentions of more than 13,200 people, Belousov said. They have launched 1,900 probes into allegations of ill-treatment and illegal detention, he said.

Russia has accused Ukraine of carrying out war crimes and the West of ignoring them, including alleging that Ukrainian soldiers had executed Russian prisoners of war. The United Nations in November said it had found evidence that both sides had tortured prisoners of war, with a U.N. official saying Russian abuse was “fairly systematic.” Kyiv has previously said it would investigate any alleged abuses by its armed forces.

Minenko believes her alleged tormentors targeted her because her husband had been a soldier. During his burial a week after his death, Russian forces turned up at the cemetery and made Minenko kneel next to his grave, firing their automatic weapons in mock execution, she said.

According to Minenko, on three occasions in March and April men in Russian military uniforms with their faces covered by balaclavas came to her home at night, interrogated her and took her into detention. On one occasion, the men forced her to undress and then beat her while her hands were tied to the chair and her head was covered.

“When you have a bag on your head and you’re being beaten, there is such a vacuum, you cannot breathe, you cannot do anything, you cannot defend yourself,” Minenko said.

Moscow’s February invasion of Ukraine plunged Europe into its biggest land war since World War Two. Having begun its occupation of Kherson city in March, Russia withdrew its forces in November saying it was futile to waste more Russian blood there.

Of more than 50,000 reports of war crimes that have been registered with Ukrainian authorities, Belousov said more than 7,700 have come from the Kherson region. More than 540 civilians remain missing from the region, he added. Some people have been taken to Russian-held territory in apparent forced deportations, including children, according to Kovalenko, the regional prosecutor.

Belousov said authorities have found more than 80 bodies, the majority of whom were civilians, with more than 50 of those people having died as a result of gunshot wounds or artillery shelling. Belousov added that hundreds of bodies of civilians had been found in other areas that Russian forces had withdrawn from. That includes more than 800 civilians in the Kharkiv region, where investigators have had longer to probe after Ukraine retook a vast tract of territory in September.

Ukrainian authorities have also identified 25 locations in the Kharkiv region they described as “torture camps,” according to a Jan. 2 Facebook post by Kharkiv’s regional police chief, Volodymyr Tymoshko.

Some of the thousands of alleged war crimes committed by Russian forces could be escalated to overseas tribunals if they are deemed sufficiently serious. The Hague-based International Criminal Court (ICC) has opened an investigation into alleged war crimes in Ukraine.

The numbers that are emerging on the scale of alleged detentions and torture, “point to widespread and grave criminality in Russian-occupied territory,” said British lawyer Nigel Povoas, lead prosecutor with a Western-backed team of legal specialists assisting Kyiv’s efforts to prosecute war crimes.

Povoas said there appears to have been a pattern to inflict terror and suffering across Ukraine, which reinforces “the impression of a wider, criminal policy, emanating from the leadership” to target the country’s civilian population.

One 35-year-old man from Kherson city said that during a five-day detention in August, Russian forces beat him, made him undress and administered electric shocks to his genitals and ears. When the current hits “it’s like a ball flying into your head and you pass out,” said the man, who asked to be identified only by his first name Andriy due to fear of reprisals.

He said his captors interrogated him about Ukraine’s military efforts, including the storage of weapons and explosives, because they suspected him of having links to the resistance movement. Andriy told Reuters he knew people who served in the Ukrainian military and territorial defence forces but wasn’t a member himself.

One of the largest detention facilities in the region was an office building in Kherson city, according to Ukrainian authorities. They say more than 30 people are known to have been held in just one of the rooms in the warren-like basement that was used for detention and torture during the Russian occupation. An investigation to establish the total number of people held is ongoing, authorities said.

During a December visit to the building’s basement, the smell of human excrement filled the air, bricked-up windows blocked the light and lying visible were signs of what Ukrainian authorities say were tools of torture by Russian forces such as metal pipes, plastic ties for ligatures and a wire hanging from the ceiling allegedly used to administer electric shocks. Scratched on the wall were notches, which authorities said were made by detainees possibly to count the number of days held, as well as messages. One read: “For Her I Live.”

Another location in the city where people were allegedly interrogated and tortured was a police building that locals have referred to as “the hole,” according to Ukrainian authorities and more than half a dozen Kherson residents Reuters spoke to.

Liudmyla Shumkova, 47, said she and her 53-year old sister were held captive at the site, on No. 3 Energy Workers’ Street, for most of the more than fifty days they spent in detention this summer. She said the Russians asked them about her sister’s son because they believed he was involved in the resistance movement.

Shumkova, who works as a lawyer in the health sector, said about half a dozen people packed into a cell with just a small window for light and as little food as one meal a day. She said she wasn’t physically tortured but fellow detainees were, including a female police officer she shared a cell with. Men received particularly harsh torture, she said. “They screamed, it was constant, every day. It could last for 2 or 3 hours.”

Investigators continue to try to identify those responsible for the alleged war crimes, including the possible role of senior military leadership. When asked whether authorities had initiated criminal proceedings against alleged perpetrators of torture, Belousov, the war crimes chief, said more than 70 people had been identified as suspects and 30 people had been indicted.

Belousov, who didn’t name the individuals, said most of the suspects are lower-ranking military officials but some are «senior officers, in particular colonels and lieutenant colonels” as well as senior figures in pro-Russian Luhansk and Donetsk military-civilian administrations. Representatives of the pro-Russian Luhansk People’s Republic and Donetsk People’s Republic didn’t respond to questions about whether their forces were involved in unlawful detentions or torture.

The Kremlin and Russian defence ministry didn’t respond to questions about alleged perpetrators.

On a cold December day in the village of Bilozerka in the Kherson region, war crimes investigators pored over a courthouse Ukrainian authorities say was used by Russian forces to detain and torture individuals as well as a nearby school that was turned into a barracks for around 300 Russian soldiers. The now deserted school building, where walls were painted with the “Z” symbol that has become an emblem of support for Russia in the war, was littered with debris including gas masks and medical kits, Russian literature and bullets fired into a brick wall.

At the courthouse, a small team of investigators dusted for fingerprints and collected DNA samples. In an adjacent garage, they had placed numbered yellow markers to identify evidence. A desk chair lay upturned and nearby lay plastic ties littered as well as a gas mask attached to a tube and pouch for liquid, which two prosecutors said resembles improvised torture devices allegedly used by occupying Russians to create a sensation of drowning.

The Kremlin and Russian defence ministry didn’t respond to questions about methods of alleged torture.