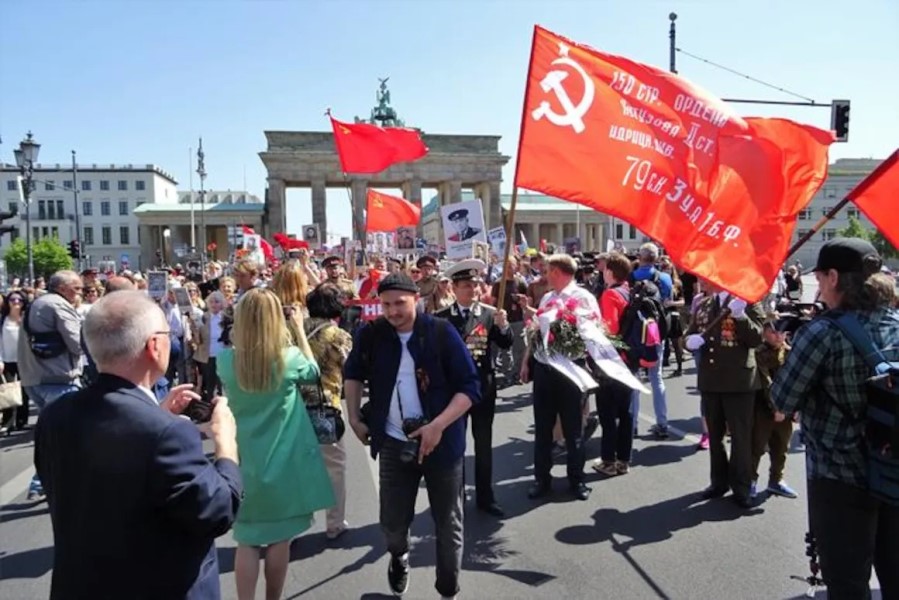 On May 9, in Berlin, the 1 + 1 TV channel camera crew was attacked by Russians who were celebrating Victory Day over Nazism in Germany. The incident took place in Treptower Park near the Soviet Memorial. According to TV presenter Natalia Moseychuk, on the eve of May 8, the Ukrainian diaspora, together with Ukrainian diplomats, laid wreaths and flowers near the Memorial to honor the memory of those who died during the Second World War.

Next day, another event was held near the Brandenburg Gate — the “Immortal Regiment”, in which many Russians took part. At the same time, the Ukrainian camera crew discovered that the flowers and wreaths laid by the Ukrainians had been removed from the Memorial. At the time of fixing this incident, Russians, who were celebrating Victory Day, were near the Ukrainians. Hearing Ukrainian speech, the Russian group began shouting insults, using offensive language and threatening Ukrainians. In particular, one of the Russians tried to attack a Ukrainian TV presenter with the words “There is no such people, you are nobody, you need to be massacred.”

As a result of the attack on Ukrainian journalists, the Berlin police opened an administrative case, and the perpetrator faces a fine or deportation to the Russian Federation. The blatant impudence of the Russians was intensified by the fact that they behaved like hosts during the celebration and ignored any conventions. It should be noted that the Berlin authorities banned the demonstration of Ukrainian and Russian flags during mass events on May 8-9, but the Russians actually ignored this, using their flag during mass marches.

The fact of the attack on the Ukrainian camera crew confirms the obvious conclusion: the Russians feel hatred for the Ukrainians, which is inherent in them at the genetic level. The Ukrainian language they heard was enough to lose their temper and use an outright aggression and violence against a woman. Modern Russian society is a collective image of a group of Russians in Germany driven by similar motivations and attitudes. That is why it in every possible way supports the genocide of Ukrainians carried out in Ukraine by Russian troops, and Putin’s rating, despite the pressure of sanctions, continues to grow. The average Russian is ready to bear hardships, remaining faithful to his dictator, convinced of the correctness and necessity of the complete genocide of the Ukrainian people. Russian propaganda has gone very far, so the war in Ukraine is an illustration of what awaits every European country if Russia and Russian radical chauvinism, called Rushism, cannot be stopped in Ukraine. Putin has consistently portrayed the West as Russia’s enemy, which must be defeated by any means possible. This means that the unleashing of a major war in Europe between Russia and NATO is by no means a rhetorical question.