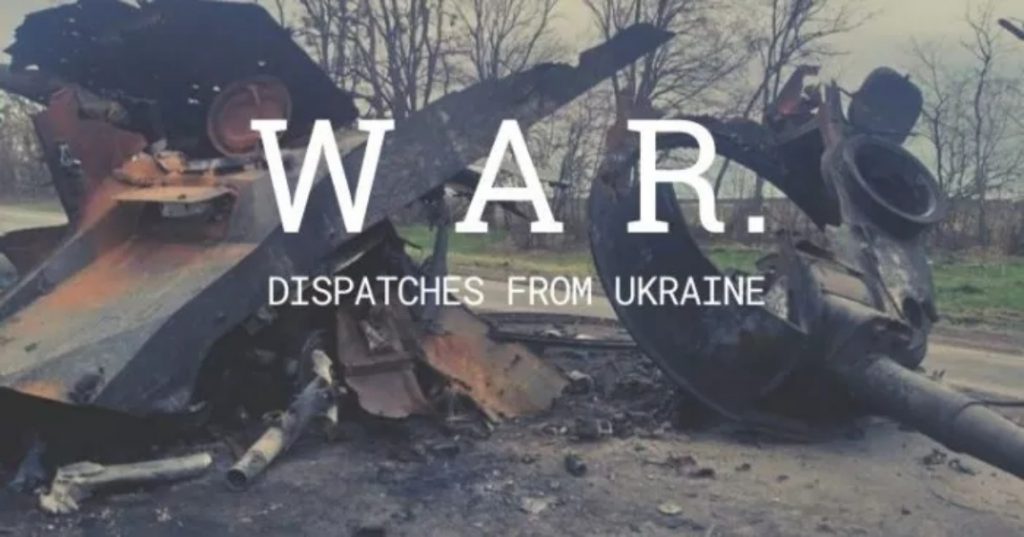 In April, information about the Russian war crimes in Katiuzhanka as well as in the other occupied territories of the Kyiv Oblast was presented by the Ukrainian delegation to PACE. It was one of the messages that finally persuaded PACE to adopt Resolution 2433 “Consequences of the Russian Federation’s continued aggression against Ukraine: the role and response of the Council of Europe.” This is the first PACE resolution, which directly calls to “immediately establish a Special International Criminal Tribunal to investigate and prosecute the crime of aggression committed by the political and military leadership of Russia.”

The picturesque village of Katiuzhanka is located 47 km north of Kyiv and is hidden in the deep woods. The area was seized by the Russian army in the early days of the war, and residents stayed under occupation for more than a month.

It is the place where infamous Chechen troops made their belligerent TikTok videos, trying to convince the world that in just a couple of days they would take Kyiv (they did not).

There used to be two ways to get to Katiuzhanka: via Bucha, Irpin, destroyed Borodianka, and through the river crossing in Demydiv. All these places were occupied by the Russians, therefore Katiuzhanka was fully cut off from the territories controlled by the Ukrainian army. 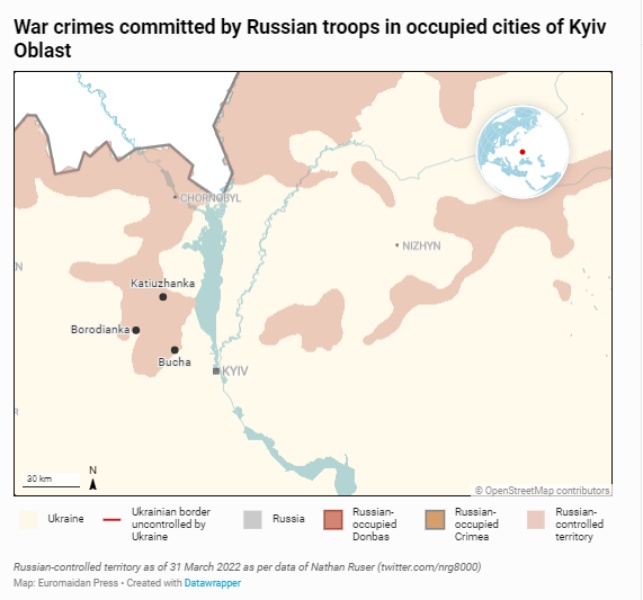 On 1 April, the Armed Forces of Ukraine liberated the entire Kyiv Oblast, including Katiuzhanka.

For more than a month local people had lived without electric power, heat, mobile connection, and the Internet. The mobile connection was finally restored on 14 April. The internet now works thanks to Elon Musk – his Starlink receiver is stationed in the building of the village council and currently providing everyone with access to the worldwide network. 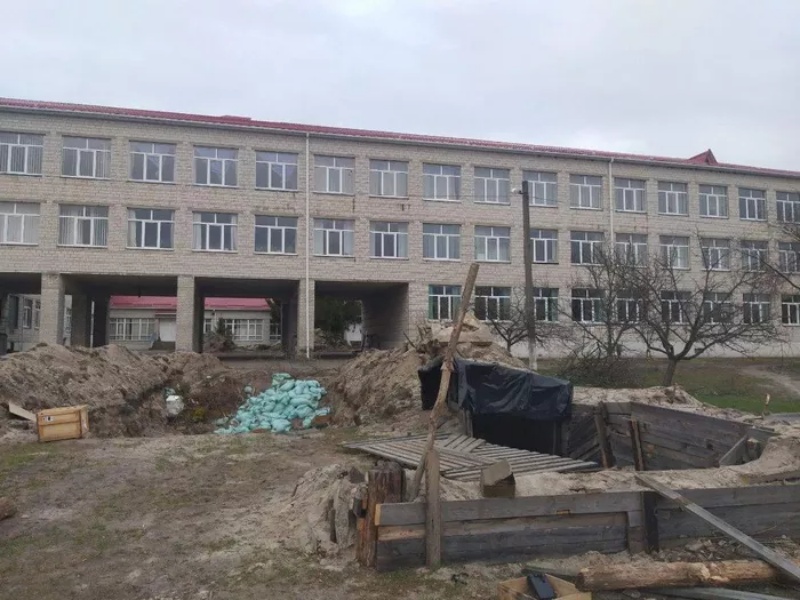 Today, Katiuzhanka seems a very peaceful place. Only ruined buildings, burned-out Russian tanks, and APCs remind us that Russian troops have ever been here.

As we arrived in the center of the village, the Ukrainian military there was distributing humanitarian aid. We stopped for a while, trying to find out directions to the local school. During the occupation, the school served as the headquarters for all Russian troops that were preparing to attack Kyiv.

Local people gladly showed us the way. The first impression was that the school looks neat and clean, except for the broken locks on the front doors, proving the presence of the Russian occupants some time ago.

Although when I looked around, I realized that the Russians had planned to turn the school into an impregnable fortress. I have never seen such a big amount of caponiers for tanks and armored vehicles. The entire area of the schoolyard was dug up by excavators. 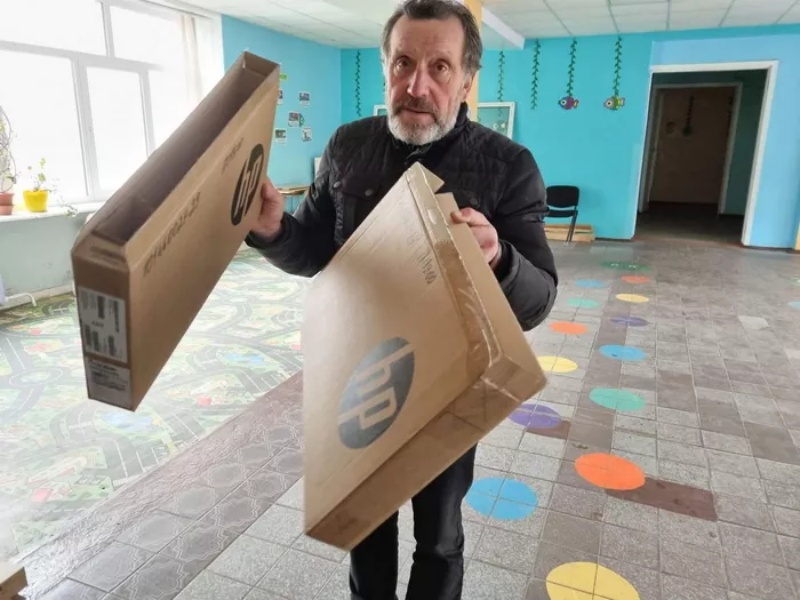 We came inside and saw a tall handsome man surrounded by women actively chatting with each other. The man turned out to be the school principal Mykola Mykytchyk. Despite being busy, he agreed to give us a tour and told us what had taken place at the school during Russian occupation.

It was obvious how much Mykola loved his job. He was enthusiastic and passionate while talking about his school’s achievements, its teachers, and famous alumni.

However, when I tried to switch the talk to the topic of Russian occupation, his eagerness and passion vanished without a trace. His hands began trembling, and tears filled his eyes. He wiped them away, looked at me, and said:

«Before the war, our school used to have 40 laptop and 50 desktop computers. Every single child could gain computer skills, both younger and senior students. Russian soldiers looted everything, leaving just empty boxes. Moreover, they looted the other school equipment such as interactive whiteboards, video projectors, and stole even pens and paints. Let me show you this.»

He opened the door to the classroom. A strong smell of urine and feces quickly overwhelmed my nose and burnt my eyes. The unbearable smell nearly made me throw up.

“What is that smell? Why is it coming out from the classroom?”

“It used to be a brand-new classroom for the first-graders, it was newly-renovated. But the Russian soldiers arranged a toilet for themselves here.»

“Now let’s go to the toilet,” the principal offered.

We walked in and saw several children’s mattresses in between toilets together with empty food boxes. Russian soldiers slept and ate in the toilet. Looking at my completely confused face, the principal added:

“Neither do I understand, how normal people can sleep in the toilet and instead ‘go to the toilet’ somewhere else. It’s my firm belief that this evidence has to be presented to the International Criminal Court. The whole world should be aware of the war crimes committed by Russians in Ukraine. Massacres, looting, violence against women, men, and children, toilets in classrooms. Everyone needs to know about the essence of the so-called ‘mysterious Russian soul’.”

The principal also showed us the other classrooms. Russians looted them too. Before going upstairs, Mykola stopped and said:

“You need to know that our school was not the only looted place. They robbed every single house they lived in. They took away everything, from second-hand lingerie and used soap bars to cars. They broke into houses, telling that they were searching for the ‘Ukrainian military,’ but, in fact, they were simply looting.”

“Actually, it’s nothing… we will restore all of it. But unfortunately, we cannot bring the dead back to life. The Russians created a torture chamber in the school basement, bringing people here from all over the Kyiv Oblast. It was a real torture chamber with all its attributes. There, Russian soldiers had tortured innocent people and videotaped it. They dumped the bodies of those who could not withstand the torture and died in the schoolyard. Then they forced local people to bury them nearby.

There was an especially bizarre case – they brought here and tortured a Protestant priest. Later, they said that he had told them everything they wanted to know, and even had agreed to convert and become an Orthodox priest. Just imagine what the hell was going on here. I have no idea how people can be so cruel. Can you actually call them ‘people’ after everything they have done?” 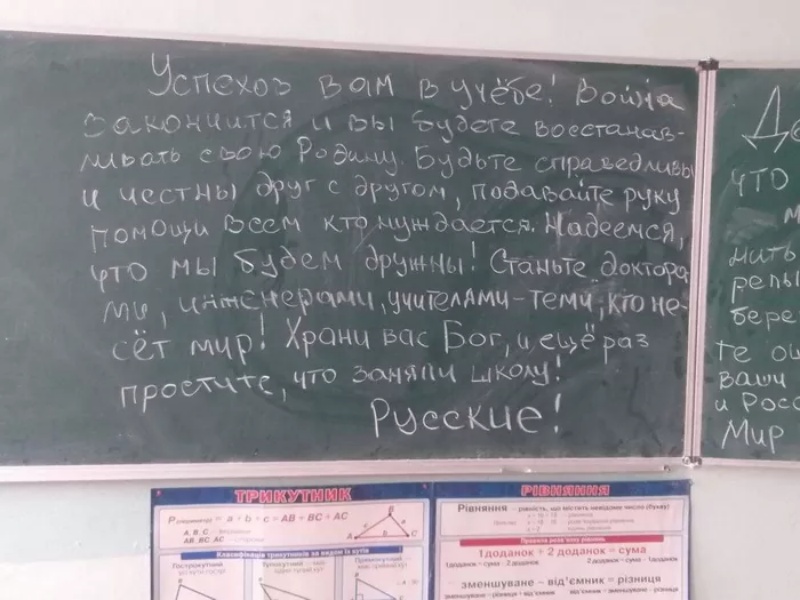 On the second floor, we met one of the teachers. She invited us to her classroom. There we saw a message written by the Russian occupants on the school board.

“Kids, excuse us for such a mess. We tried to save the school, but there was shelling. Leave in peace, take care of yourself, and do not repeat the mistakes of your ancestors. Ukraine and Russia are one nation!!! Peace be with you, brothers and sisters! We wish you success in your studies. War will be over and you will be restoring your Motherland. Be fair and honest with each other, and give a helping hand to those in need. We hope, that we will be friends! You will become doctors, teachers, engineers, those who bring peace! God save you all, and sorry once again for taking the school. Russians.”

The teacher turned to us and started crying. After a while, she calmed down and said:

“How disgusting and cynical it is to see such writings. After setting up a torture chamber – hurting, torturing, and killing people – they are telling the children to be humane. You know, they came to my place as well, looking for Ukrainian spotters. And what do you think they did? Right. They took away everything from my house: two TV sets, a hairdryer, a blender, frying pans, spoons, forks and, excuse me, even my lingerie together with sanitary pads. I am 55 years old and asked them: ‘Guys, why are you taking my panties and pads? There is nowhere in Russia to buy them? Maybe Russian women do not use them at all?’ They laughed at me: ‘Our “mamashi” [“mamas” – an arrogant and disrespectful way to call a mother in Russian – Ed.] will wear everything.’ They loaded it all onto their APC and went on to the next house. I hate these freaks so much.”

The school principal apologized to us, as he had to leave. Soon, Ukrainian Security Service officers arrived to inspect the torture chamber, and retrieve all the military documents and the diary of a Russian soldier they found there.