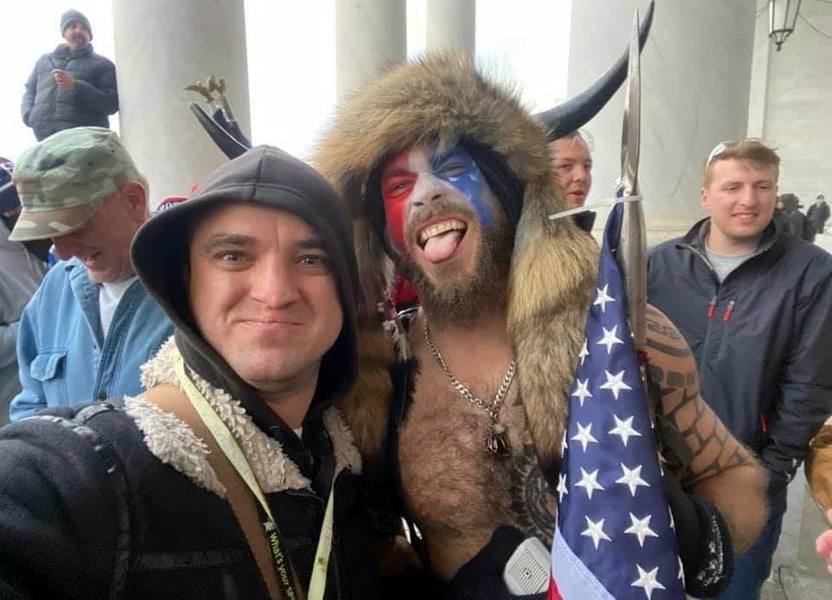 Russian military intelligence-linked militant groups may participated in the violent siege of the U.S. Capitol building during a riot organized by Donald Trump’s supporters. The analysis of photos and videos from open sources shows that Russian military intelligence, previously may be involved in a large-scale cyber attack on US federal agencies, intervened in the recent events in Washington DC.

The tactics used while storming the Capitol building reminds the methods the Russians had worked out during the protests of the yellow vest movement in France and Catalonia independence supporters. We mean here the infiltration of their militants into the riot crowd to fuel and escalate the protests, and, as a result, to help the protesters invade infrastructure and federal objects. In addition, the mobs’ actions in the Capitol itself remind the tactics used by Russian Special Operation Forces while seizing the parliament building in Crimea, Ukraine, and government agencies in eastern Ukraine in 2014.

The Kremlin uses protests and popular riots to perform camouflaged actions of influence abroad. It is achieved by infiltrating Russian intelligence officers who form the militant wing inside the protest movement, engage in agitation, introduce conspiracy theories (as, in France, for instance), and recruit influential members of the movements.

Similarly, in 2016, under the guise of local nationalists the Main Intelligence Directorate attack groups participated in a coup attempt in Montenegro.

In 2020, judge Joaquin Aguirre from Barcelona, ​​who was investigating the illegal financing of the 2017 Catalan independence referendum, stated that, shortly before the referendum, Russia had offered to send 10,000 soldiers to Catalonia and pay the Catalan debt. The judge’s conclusion was based on two recorded telephone conversations of the Catalan politician Victor Terradellas, an associate of the former Catalan President Carles Puigdemont made in May 2018. We doubt the Kremlin’s ability to mobilize and transfer such a big number of militants to European countries, however, the sheer fact that this issue was discussed may show Russia’s potential to infiltrate militants into protests at the national level abroad.

In one of the videos capturing the Congress building siege one can clearly hear shouts in Russian “Smeley, smeley (be brave, be brave)…“  It may prove the fact that the Russian militants performed the organizational function to make the protesters move more active.

The other video shows one of the storm participants shouting in Russian’ ‘faster, faster’.

On our estimates the Capitol building invasion discredited the Congress computer networks and could lead to documents leak as well. During seizing the office of Nancy Pelosis, the speaker of the US House of Representatives, letters and documents were stolen from her desk. There is a high probability of the Congress premises got bugged.

The attack on the Capitol building was actively covered by the Main Intelligence Directorate- affiliated media channels. In the Russian-language information space they pictured the US authorities as discredited. In Russia, the violence fit neatly into the Kremlin’s narrative of a crumbling US democracy. A state-controlled news channel aired the chaos on a split screen, one side showing happy Orthodox Christmas festivities in Russia, the other the mayhem in DC.

Russia’s involvement in the United States protests and the siege of the Capitol building is seen as an act of state terrorism, may be similar to the 9/11 attacks. Therefore, recognizing Russia as a terrorism sponsoring country, imposing tougher sanctions against the Russian economy and restoring the international image of the United States as a state got attacked from outside will become priorities for the new White House Administration.

The Institute for Global Threats and Democracies Studies (IGTDS)