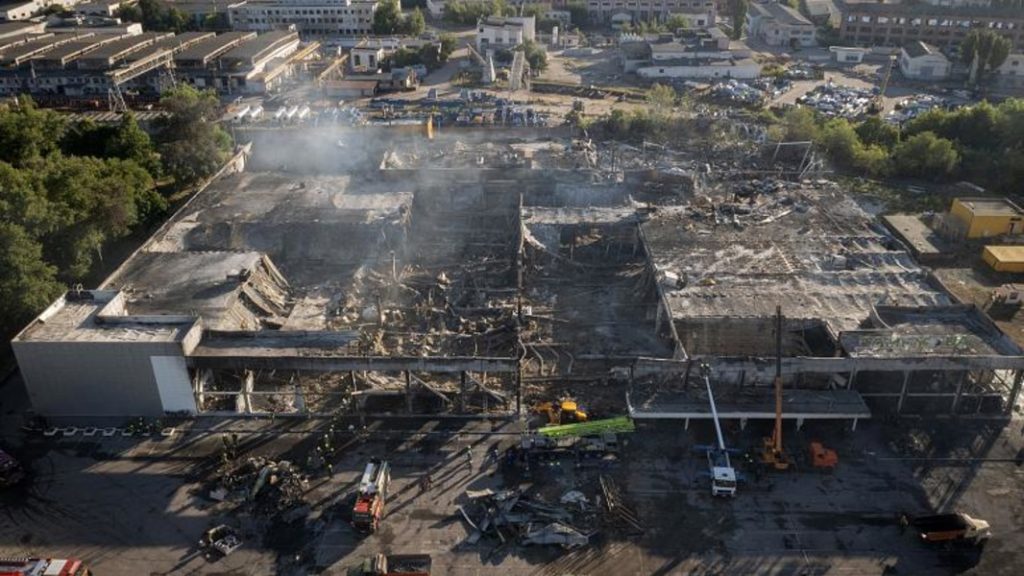 On June 27, Russia launched a missile attack on a shopping centre in city of Kremenchuk. The strike on the shopping centre is an act of military terrorism. According to preliminary estimates, at the time of the missile hit, there were many people in the trading building. Possibly up to 1000 people. Rescue work is being carried out, the number of victims and injured goes to dozens of people, new victims are being discovered.

Russia is raising the stakes and on Putin’s initiative systematically bombarding Ukrainian cities with obsolete missiles with poor accuracy and provoking massive destruction and death toll. The Russian army uses missiles developed in the 1950s and removes all available weapons from conservation in order to exterminate the Ukrainians. In particular, it is known that Kremenchug was hit with a X-22 missile, a development of the 50s of the last century. Also, On June 26 at 06:00 am, Russia launched a missile attack on a kindergarten in Kyiv. Fortunately, in the morning the site and the building were empty. This is another proof that Russia is using outdated and inaccurate missiles against Ukraine, but with tremendous destructive power.

Shortly after the attack on Kremenchuk, Russian news portals, in order to hide another crime of the Russian army, began to massively publish materials about the “next fake” that the Ukrainians produced to slander Russia. The cynicism of the invaders has reached such a level that they claim that «the role of the corpses was played by the same actors who were involved in the depiction of the tragedy in Bucha.» The world must see and realise the cynicism and cruelty of the Russians — a nation of murderers and occupiers. Because the atrocities of the Russian army in Ukraine are unthinkable even for a totalitarian and pathologically cruel Russia.

Russian cynicism has reached all possible limits. When the Kremlin was talking about the possibility of «strike at the decision-making centres», no one could have thought that these «centres» are located in shopping centres and kindergartens. Ukraine needs as many weapons as possible — artillery, MLRS, air defence to protect cities and airspace. Otherwise, Putin, obsessed with a manic desire to kill Ukrainians, will give orders to repeat such precedents. Because he made a firm decision to seize Ukraine and include it in Russia.

Due to the actions of the Russian army no one in any city of Ukraine can feel completely safe. This is unthinkable in the 21st century and requires a symmetrical response from the international community. The strike inflicted by the Russians on the shopping centre in Kremenchug affected non-combatant civilians in the building. Putin’s goal is the total genocide of Ukrainians. June 27 will be a day of mourning and a repetition of the tragedy in Bucha — an act of blatant cruelty and unscrupulousness, pathological hatred of Russians for Ukrainians.

Undoubtedly, the Russians will deny their involvement in the attack on Kremenchug, laying the blame on the Ukrainian side, publishing a stream of lies and imaginary «witnesses». They will not be able to mislead the entire civilized world, which is aware of the depth of the Ukrainian tragedy. In the 21st century, innovative technologies will make it possible to track the causal relationship of any event and draw the right conclusions.

Definitely, angry with the failures at the front, Putin deliberately gives the order to inflict maximum losses on Ukraine — economic, resource, demographic. And because of this, first of all, peaceful Ukrainians suffer.

The world must impose the most severe and uncompromising sanctions on Russia in order to weaken it as much as possible. Otherwise, in the near future, the tragedies that occurred in Bucha and Kremenchug will occur in European cities.