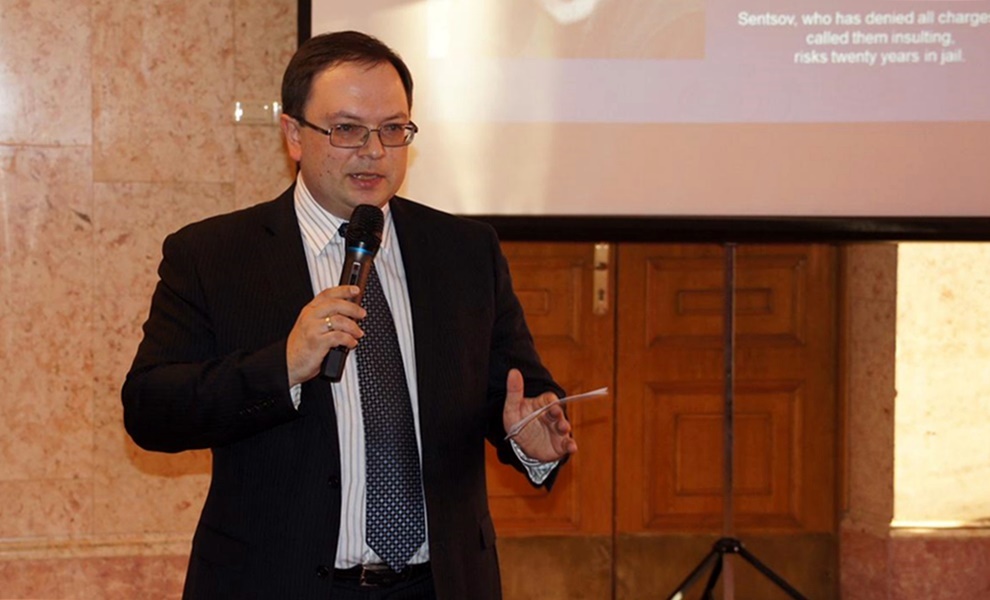 The new Ambassador of Ukraine to the Republic of Cyprus Mr Ruslan Nimchynskyi gave an interview to the Cyprus Daily News about Ukraine-Cyprus relations, plans and priorities in collaboration.

— What is your personal experience of the first months of working in the Republic of Cyprus as the Ambassador of Ukraine?

— I came to Cyprus in October 2020 and presented my Credentials to His Excellency President of the Republic of Cyprus Mr. Nicos Anastasiades in December. Since October I have had several protocol meetings at the Ministry of Foreign Affairs, the Office of President, the House of Representatives and with some colleagues (Heads of the Missions) from the Diplomatic corps.

I should mention that the traditional friendship between Ukraine and Cyprus has grown over the years since the establishment of diplomatic relations in 1991 and the bilateral relations has always been developing in a smooth and constructive manner.

Before my arrival in Cyprus, I knew that it would not be an easy year. Partly due to the pandemic (although at that time we could not predict the real scale of the Covid-19) but mostly because we have missed something in our relations with Cyprus in recent years. Thus, a lot needed to be done to swiftly revitalize our bilateral dialogue. By the way, the position of the Head of our Mission in Nicosia was vacant for almost a year, and the effect was quite tangible.

Undoubtedly, we have plans and are actively working to bring our political dialogue to a new level. We have already paved the way towards this goal. Three important events so far to mention — a telephone conversation between our Foreign Ministers in September 2020, a telephone call between our Deputy Foreign Minister and the Permanent Secretary of the MFA of Cyprus in October 2020, political consultations between the MFA of Ukraine and Cyprus in November 2020. I have a strong feeling that all these efforts from both Sides showed a mutual desire to improve and increase our bilateral relations and friendly ties and move forward pursuing new goals and implementing promising projects in many spheres of our shared interests.

— How would you characterize today`s Ukraine-Cyprus relations?

In spite of the situation with Covid-19 pandemic and strict measures implemented in both countries, our bilateral dialogue is developing in a positive and prolific agenda.

An outstanding event was held on April 22 – the long awaited Second Meeting of the Intergovernmental Ukrainian-Cypriot Commission. It provided an opportunity for a number of governmental institutions to exchange views on what has been accomplished in our wide bilateral agenda, and, the most importantly, to define how we will move forward.

I was honoured to have several productive meetings and fruitful discussions with the leadership of the political parties of the Republic of Cyprus. And I wish to stress the great importance that our interparliamentary relations between the Verkhovna Rada of Ukraine and the House of Representatives of the Republic of Cyprus have had and will continue to have in further strengthening our bilateral friendly dialogue. We are keen to organise a video-meeting between members of the Ukraine-Cyprus interparliamentary friendship group as soon as it becomes possible after the parliamentary elections in the Republic in Cyprus in May.

— How did COVID-19 pandemic influence on bilateral trade, economic and investments?

It would not be something new if I say that the global economy is recovering very slowly now, and there are still some destabilizing factors and uncertainties. For sure our bilateral trade, economic and investments ties with Cyprus are not in such a satisfactory level for both Sides as it should be.

We have agreed to make use of our potential in those areas. To deepen our economic cooperation, to discover and optimise our own possibilities is our preliminary goal in these difficult times for all countries. This is one of the outcomes of the mentioned recent Second Meeting of the Intergovernmental Ukrainian and Cyprus Commission.

Business development and investment attraction are on top of our priorities list. We have agreed to establish cooperation between Ukrainian and Cypriot investment promotion agencies as an effort to help strengthen investment opportunities and business climate in Ukraine and Cyprus.

The transport sector remains the driving force of our national economies. Further implementation of the bilateral Agreement on Maritime Merchant Shipping is the right track to enhance cooperation in this area.

By the way, the mentioned Memorandum of Understanding between National University «Odesa Maritime Academy» and the Cyprus Marine and Maritime Institute has opened new prospects for cooperation in maritime research, technology development and innovation, education and training.

The agricultural sector is of considerable interest — it has been agreed to promote and increase trade in agricultural products.

In the field of energy, we look forward to deepening cooperation on energy efficiency, renewable energy sources and alternative fuels. Important attention will be paid to the implementation of joint investment projects in «green» energy for the private sector.

— Ukraine and Cyprus are usually believed to be close to each other based on common religion and traditionally friendly relations. What do you expect from further cooperation in humanitarian and cultural spheres?

Cyprus is a beautiful island with a rich, ancient history, strong religion ties and a modern business and investment environment.

Cooperation in cultural sphere between Ukraine and Cyprus is based on an Agreement between the Cabinet of Ministers of Ukraine and the Government of the Republic of Cyprus on Cooperation in the field of culture.

In 2020, several cultural and artistic events were organized to promote Ukraine and Ukrainian culture, language, history and traditions of the Ukrainian people.

We plan to intensify bilateral contacts between musical, theatrical and other arts institutions and associations in the field of culture and arts. We already draft some ideas regarding cultural exchanges, festivals, joint cultural events, arts and books exhibitions etc.

It is important to mention that next year we will celebrate the 30th Anniversary of the establishment of the diplomatic relations between Ukraine and the Republic of Cyprus and we have already started to elaborate on possible ideas and cultural projects to be implemented in 2022.

I cannot but mention that Cyprus is an extremely popular and important destination for Ukrainian tourists. We are trying to identify ways and ideas to develop our cooperation in this highly promising area.

— We are on the eve of the World War II commemorative events. What are today`s feelings in Ukraine about that unhuman war?

On May 8-9, Ukraine along with the entire world marks the Day of Remembrance and Reconciliation to commemorate the victims of the World War II.

The Ukrainians fought against Hitler and his allies in the Polish, Soviet, Canadian and French armies in the European, African and Asian theatres of war and on the Pacific and Atlantic oceans.

According to various estimates, 8-10 million Ukrainian were killed in WW2, including about 5 million of civilians. 2.2 million Ukrainians were taken to forced labor camps in Nazi Germany. More than 700 towns and urban-type settlements and almost 30,000 villages were completely or partially destroyed.

On those remembrance days we honor the feat of veterans who fought Nazism and defeated it. But no less noteworthy and memorable are those affected by the war — prisoners of war, ostarbeiters, underground fighters, children of war, civilians affected by the occupation and the fighting that swept through their towns and villages. War is not about tanks, guns and spectacular battles — war is millions of small and big human tragedies that have lasted for years.

Now, as in World War II years, Ukraine is at war with the aggressor. This struggle has been going on every day for seven years and we have no right to lose, because, like 75 years ago, we are defending our homeland, defending our right to freely choose the future. For us, it is a war for freedom, civilization, democracy and the European values. The power of our armed forces is the key to the existence of the state and the preservation of human rights for citizens.

We remember how terrible disaster World War II was for Ukrainians. We remember that the aggressor was stopped by the joint efforts of the United Nations. Let us not forget: the one on whose side justice is, who defends his land, always wins. This memory makes us stronger. It is a guarantee that such a tragedy will not happen again in the future.