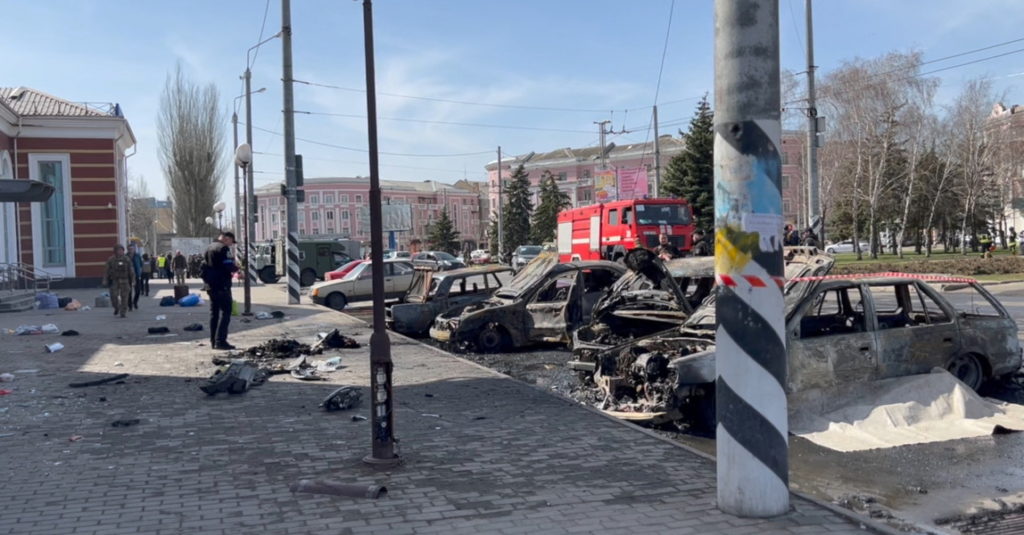 In addition to launching missile strikes on the energy infrastructure, Putin continues to consistently destroy Ukraine’s transport infrastructure, and the scale of the shelling is becoming a targeted genocide of Ukrainians. Russia is unable to defeat Ukraine on the battlefield and this has forced Putin to start destroying Ukrainian infrastructure to make life unbearable for Ukrainians. Air defense and anti-missile defense are the key to countering Russian missiles.

On November 27, Russia shelling in the Kryvyi Rih Territorial Community destroyed railway infrastructure. The railway was completely de-energized by two missiles, and the movement of trains was completely stopped. In addition to strikes on the energy infrastructure, Russia is also shelling the transport infrastructure of Ukraine with the aim of creating a complete logistical collapse.

The Russian army turned out to be asymmetrically weak, and Putin decided to destroy Ukrainian infrastructure to make life unbearable for Ukrainians. Since October 10, Russia has launched systematic missile terror against Ukraine, using from 30 to 90 missiles in one attack. The Russian military-industrial complex works non-stop on the production of Kh-101 and Kh-555 missiles, which are used to strike Ukrainian cities.

Putin’s actions are a symbiosis of terrorism and war crimes, Russia should be recognized as a terrorist state in the Western countries at the official level and all possible sanctions should be applied against it. In fact, Putin wants to start the process of the world redistribution, and this could cause fatal consequences for humanity. Modern history knows the example of only one person who had the same motives as Putin — that is Hitler. The Kremlin dictator decided to go all in and will fight to the last Russian. He actually challenged the West, and in Ukraine only the initial stage of a global conflict is forming, which will surely spread to Europe if the Russian army cannot be defeated in Ukraine.

Russia destroys not only the energy, but also the transport infrastructure of Ukraine, and launches missile strikes on the gas production industry. Putin wants to plunge Ukraine into cold and darkness. If the Russian industry adapts to the “shock effect” of the war, missile terror will spread to medical institutions and objects of the food industry of Ukraine. The Holodomor of 1932-33, unleashed by Stalin, led to 10 million victims. These days, Putin is starting a new genocide of Ukrainians — and the West must prevent it. Ukraine must survive the hardest winter in independence of the country since 1991. Putin will continue to launch missile strikes as the Russian military manufactures another batch of missiles, because that is all that Russia can use against Ukraine. The West has no right to be aside: anti-missile defense and anti-aircraft defense for the Armed Forces are the key to the survival of Ukrainians in the winter period.