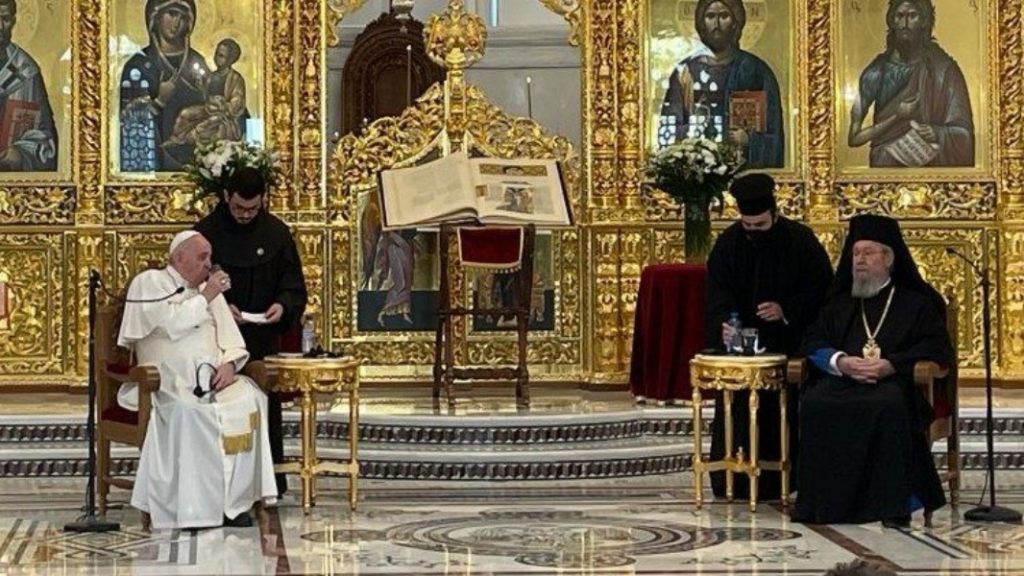 Pope Francis recalls the late Orthodox Archbishop of Cyprus, who passed away on November 7, as a man of dialogue and a lover of peace, reports VaticanNews.
During the Wednesday General Audience, Pope Francis turned his thoughts to the Cypriot people mourning the death of His Beatitude Chrysostomos II.

The late Orthodox Archbishop, who had been leading the Church of Cyprus since 2006, passed away on Monday morning at the age of 81 in his residence in Nicosia due to cancer.

A man of dialogue and a lover of peace

“He was a far-sighted pastor, a man of dialogue and a lover of peace, who tried to promote reconciliation between the different communities of the country”, said the Pope”. who remembered with “grateful affection” the fraternal meetings they held during his visit to Cyprus in December 2021.

A protagonist of the ecumenical movement

Chrysostomos was one of the great protagonists of the ecumenical movement. As president of the Holy Synod of the Church of Cyprus, he participated in the funeral of Pope John Paul II and in the inauguration of Pope Benedict XVI’s pontificate in 2005 in the Vatican.

H.B. Chrysostomos II and the Popes

In response to this fraternal gesture, Benedict XVI sent a delegation to the ceremony of his enthronement in 2006. On June 16, 2007, the Orthodox Primate signed a Joint Declaration with Pope Benedict XVI on the occasion of his visit to the Vatican. Pope Benedict subsequently met H.B. Chrysostomos II on two further occasions: on 5 June 2010, during his Apostolic Journey, and on 28 March 2011, again in the Vatican.

The spirit of mutual brotherhood between the Catholic Church and the Orthodox Church of Cyprus was further strengthened by Pope Francis’ visit to Cyprus, where he met the late Orthodox Primate and the Holy Synod in the Orthodox cathedral.

On that occasion, the Pope thanked the late Archbishop for his “open heart” and for his commitment to promoting dialogue between the two Churches.

An outspoken advocate of the Christian community in Cyprus

An ecumenical leader, H.B. Chrisostomos II was also an outspoken advocate of the Christian community in the Northern part of the island after the Turkish invasion in  1974 which forced out many Christians.

In the obituary, the Church of Cyprus recalled «His love for the Church”, also testified by the many churches he erected and inaugurated, or had repaired and restored.