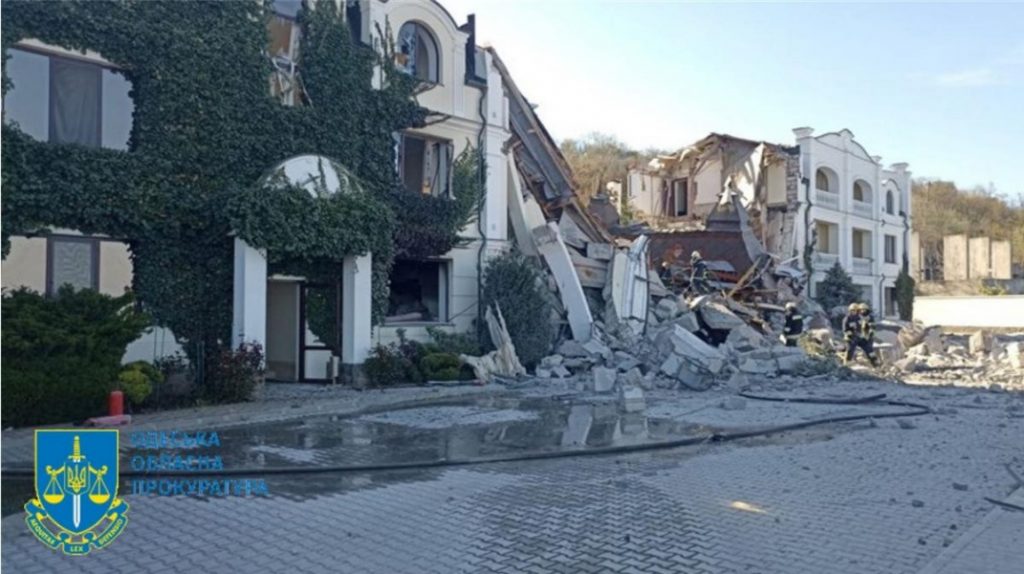 Evacuation from the Luhansk region has been suspended as of now. The occupants continuously shell the life route – Lysychansk-Bakhmut highway; Serhiy Haiday, the Head of Oblast Military Administration reported. The evacuation bus was shelled by occupants while heading to Bilohorivka to take people from all the bunkers. The rescuers could not reach the residents to evacuate them to safety. This is the reason why no evacuation and humanitarian aid vehicles will be sent there on May 9.

Operative Command ‘South’: At least six Russian ships and two submarines are deployed in the Black Sea in the vicinity of the Ukrainian shore. These vessels can carry around 50 missiles.

Tankers with Russian oil continue to enter European ports without any obstacles despite the efforts of the EU to limit Russia’s capacity to supply the fuels. The ban is bypassed by Russia with the assistance of Greece.

05:50
Oleksandr Pavliuk, Head of the Kyiv Oblast State Administration reported that in Kyiv Region the Russian troops have ruined more than 4000 residential houses during the period from the beginning of full-scale invasion till now.

Serhiy Haidai, head of the Luhansk Regional State Administration: communication has stopped with 11 people who had been hiding in the cellars in Shypilove. The fire rangers carried out rescue operation until the security conditions had worsened totally.

Sviatoslav Palamar, deputy commander of the Azov regiment in his interview to the BBC Ukraine has stated that Azovstal houses around 600 wounded Ukrainian servicemen.

He said: ‘Our servicemen have been dying every day due to severe wounds and injuries. We do not have enough antibiotics and bandages, we cannot provide them with fresh air.  Our hospital is being bombed.’

Ukraine is unable to export around 90 million tons of agro-products due to the blocking of its seaports by Russia. This way the occupant state wants to provoke a global food crisis, – PM Shmyhal stated.

On the day of May 8, the Russians ruined the facilities of Popasna Water Supply Service which had remained operational by that moment. Now the water is supplied neither to the Ukraine-controlled territories nor to the occupied ones.

Russian occupants continue to bring hundreds of bodies of Mariupol residents, whom they have killed, to the common grave near Vynohradne village. The burial site has grown considerably.

Russia wants to create migration crisis in Europe due to war against Ukraine.
He suggested that Russia had hoped that Europe ‘would stall and shake loose’ because of the migration crisis. But the EU has stood the test with decency and had accepted all the migrants; especially this is true about Poland, – Prime Minister Shmyhal said.

In Warsaw, the Russian ambassador has red paint thrown in face by protesters in Poland. Protesters carried Ukrainian flags and chanted “fascist” and “murderer” at Sergey Andreev, while some dressed in white sheets smeared with blood – symbolizing the Ukrainian victims of Russia’s war.

According to “НВ” the Russian occupants have shelled downtown Sloviansk with missiles.

Suspilne reports: An ‘entrepreneur’ from Lviv had organized illegal transportation of men abroad from Ukraine. The channel was discovered and the perpetrator was detained.

“Enkorr,” writes that the price of gasoline at filling stations continues to grow. Thus the consolidated Privat (Avias) network has raised the price of autogas. Currently, its price is 32.37UAH/l. Auto trans has raised its price by 3 UAH /l, up to 35.78UAH/l. Autogas price has grown up also in OKKO, WOG, Chipo, “Katral” and other chains.

Yevropeiska Pravda quoted Peter Szijjarto stating that Hungary will not support oil supply ban for the aggressor country. ‘Hungary will not vote for the European Commission initiative as to the sanctions against Russia because this will create the problem for Hungary and does not offer any ways to resolve the problem.’

Ukrainska Pravda reports, that Hanna Maliar, Deputy Minister of Defense,  assumed that Russia has spent almost one half of its missile stock in Ukraine, but still has manufacturing facilities and available spare parts to produce new missiles.

The Russians have resumed attacks on Azovstal despite the cease-fire regime, – Suspilne reports after the AFU General Staff.

‘Babel’ reports that Bloomberg has disclosed the forecast by the Russian Ministry of Finance. The Russian GDP this year may drop by 12%, which is more than previously expected shrinkage by 8 %. If this forecast proves to be correct then it will mean that the outcomes of the last ten years of the Russian economic growth are wasted; and that this meltdown could be equaled to the collapse of the economies of former Soviet republics back in the 1990s.

‘Babel’ reports that Bloomberg has disclosed the forecast by the Russian Ministry of Finance. According to it the Russian GDP this year may drop by 12%, which is more than previously expected shrinkage by 8 %. If this forecast proves to be correct then it will mean that the outcomes of the last ten years of the Russian economic growth are wasted; and that this meltdown could be equaled to the collapse of the economies of former Soviet republics back in the 1990s.

‘Babel’ reports that the Russians have shelled Odessa with air-ballistic missiles. Three ‘Dagger’ air-to-surface missiles were launched from the strategic aircraft Tu-22.

President Biden is expected to sign the law on lend-lease by this time.

President Biden has signed the law on lend-lease. The document provides for extended powers of the US President to lease weaponry and military equipment to the foreign states.