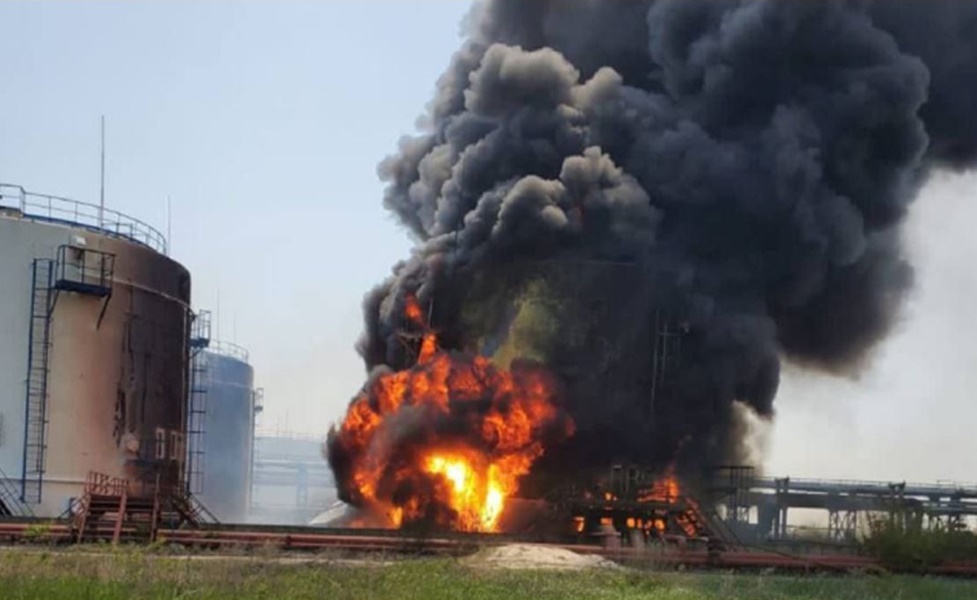 Russian occupation forces are trying their best for their festivities to take place on May 9 in the occupied parts of Zaporizhia oblast. To do this, they resort to various dishonourable activities. For example, in Energodar they are taking away documents of locals and promise to return them on May 9, hoping to gather a large number of people, according to the Zaporizhia Regional Military Administration.

The occupiers dropped a bomb on a school, where about 90 people were hiding, at 4:37 p.m.

As a result of an air strike by Russians on a school in Bilogorivka in the Luhansk oblast on May 7, the bodies of 2 people were discovered under the rubble. The death toll could rise.

operations have so far had to be suspended due to massive shelling. According to the Ukraine’s emergency servies, they plan to renew them today, on May 8.

The Russian Defense Ministry said that on May 8, “Ukraine plans to strike on Lviv and Volyn oblasts with the Tochka-U missiles,” allegedly to accuse the Russian Armed Forces. In addition, Ukraine was accused of “provocations with militants disguised in Russian uniforms.”

Operational Command South reports that during the day Russia has launched 14 cruise missiles on the Odessa and Nikolaev areas. Also occupiers attacked Nikolaev and suburbs three times using the multiple rocket launchers “Tornado”. There are victims in result of the shelling.

According to preliminary information, 60 people have died from an air strike on a school in Bilogorivka in the Luhansk oblast. 30 people were able to get out from under the rubble, seven of them were injured. Rescuers have been extinguishing the fire for almost four hours, said the head of the Luhansk Regional State Administration.

At the daybreak of May 8, Russian troops continued to shell the Luhansk oblast:

A two-storey house was destroyed in Shipilovo. According to preliminary information, 11 people are under the rubble. Another 4 houses were damaged in Rubizhne, 9 in Severodonetsk and 2 in Lysychansk.

Russia is blocking Ukrainian ports and trying to sell grain stolen from Ukraine to other countries, said President Volodymyr Zelensky. Zelensky did not specify such countries.

As of the morning of May 8, at least 225 children had been killed and 413 wounded in result of the Russian invasion of Ukraine.

On the evening of May 7, Russian occupiers shelled the hospital of the city of Orekhov, Zaporizhzhia region. According to preliminary information, the hospital was empty at the moment of the shelling. The restoration of the surviving hospital buildings continues.

Ukrainian Railways (Ukrzaliznytsia) reported on the restoration of the railway bridge connecting Kyiv and Irpin.

“It’s been the most difficult infrastructure restoration project during the war so far… Now we are returning the commuter train to the Irpin direction,” the statement said.

It’s worth reminding that the railway bridge over the Irpin River in the same-name city in the Kyiv region was destroyed on March 21. Repair work lasted less than a month.

Russia is drawing up air-defense forces to the north of the Crimea.

As the satellite images reveal, the forces are being mustered into the village of Filativka, near the Kherson region. The photos show that the number of vehicles has increased compared to the end of April. Radio Liberty reports that there are S-300 missile systems and BM-30 Smerch multiple rocket launchers.

Ukrainians have collected 300 million UAH for the military via the Diia App.

Mykhailo Fedorov, the head of the Ministry of Digital Transformation, announced:

“Together, we have already collected 300 million hryvnas to the Come Back Alive fund. With this money, our fighters were able to get helmets, bulletproof vests, tablets and laptops, quadrocopters and parts for quadrocopters, generators, thermal imaging and night optical systems, metal detectors and much more besides.”

The occupiers go on with their forced mobilization in the occupied territories of the Kherson and Zaporizhzhia regions.

The obtained data show that in order to “replenish the ranks of military personnel”, the representatives of the occupation authorities in the occupied territories of the Kherson region are searching for candidates for “service in the people’s militia” among convicts doing their sentences in the regional penitentiary institutions.

In the Dnipropetrovsk region, a 12-year-old boy brought home ammunition from a cluster projectile. The explosives detonated, and the child died.

“This is the sixth death in the region through such ammunition,” said Valentyn Reznichenko, the head of the Dnipropetrovsk Regional Military Administration.

A cruise missile and the Forpost drone were destroyed in the Odesa region – Odesa City Council.

At noon, on May 8, a unit of the air-defense forces of the South Air Combat Command destroyed the Forpost reconnaissance UAV and a cruise missile launched by a multi-purpose Russian fighter, the Su-35, towards the Black Sea.

The Russian army shells damaged the capacities of the Popasnyansky water utility: 1 million residents of the Luhansk region are currently without water – Serhii Gaidai, the head of the Luhansk Regional Military Administration.

The resumption of the water supply is possible only after the end of hostilities.

Defenders of Mariupol held a press conference today from the Azovstal plant blocked by the russian hostile troops.

Now russians promise to pay money in rubles for clearing the rubble. To provide the payments, so-called “Republican Employment Centers of the DPR” have been opened in the city.

Besides, local people are offered jobs in information support, landscaping the city, removal of debris and collecting the bodies of the dead. The occupiers offer wages ranging from 10 to 32 thousand rubles.

In Donbas, the occupiers are trying to seize Rubizhne and a section of the Popasna-Bakhmut highway, according to the May 8 evening report from the General Staff of the AFU.

In Severodonetsk direction, the enemy is trying to capture the town of Rubizhne, with no success.

In Popasna direction, russians are trying to take positions in Popasna and control the Popasna-Bakhmut road section.

The Russians are advancing in the direction of Novoselivka, with no success, fighting continues. In Kurakhiv direction, they are unsuccessfully trying to improve the tactical situation near the village of Novomykhailiovka .

The occupiers did not conduct any active offensive operations in Kharkiv direction. The main efforts were focused on preventing Ukrainian troops from advancing.

In Kharkiv region, the RF strikes resulted in three dead and five wounded people as reported by the press service of the Kharkiv RMA.

Another  attack on Odesa by the RF army: two rockets hit a facility in a residential area, causing a fire, reports the press service of the Operational Command “South”.

At 4:20 pm, Russia fired three missiles using aircraft from the Black Sea, targeting Odesa. One was shot down by air defense, the other two hit a residential area, destroying recreational areas. Later, an injured girl was found. Clearance of debris over an area of 300 square kilometers continues.

“The area of the fire is 360 m2, there is a threat of explosion for neighboring tanks. Rescue workers tried to extinguish the fire, but another artillery attack began and firefighters had to stop and leave the danger zone. Fire fighting is not yet possible. The shelling continues,” he said.

According to Head of the Sumy RMA Dmytro Zhyvytsky, the Russians struck at one of the districts of Sumy and the Jewish cemetery in Hlukhiv was damaged.

“Jewish victims of the 1918 pogrom are buried in the Jewish cemetery in Hlukhiv. The mass grave is at the same time the grave of Tzaddiks Menachem-Nokhim-David Geselev and Yisrael-Dov-Ber Nohimov Shumyatsky. It is not only a historical memorial, but a special symbol of the entire Jewish people.

The press service of Ukrzaliznytsia reports that for the period of the extended curfew on May 9, suburban trains and long-distance trains to and from Odessa are temporarily canceled.

In addition, suburban trains for the curfew period from 7pm May 8 to 5am May 10 are also cancelled in Zaporozhzhia.

Head of the Odesa Regional State Administration Maksym Marchenko in a video message says that 6 settlements of Odesa region remain without power.

“In Bolgrad district, a substation was destroyed, due to which there is no electricity in six settlements. Civilian facilities and the region infrastructure were damaged”.

President Volodymyr Zelensky says that unblocking Mariupol militarily is not yet possible due to the lack of heavy weapons, as reported by Ukrinform, citing Zelensky’s comments during a joint press conference with Prime Minister Justin Trudeau.

“This is not an opinion, these are conclusions of our Army leadership. Russia exchanges the military, if they are prisoners, for prisoners of war. That’s the situation. This is the answer that the RF has. There are no other answers,” said Zelensky.

According to the State Border Guard Service of Ukraine, Russia shelled the border areas of two regions of Ukraine with MLRS and mortars.

In Shostka district of Sumy region, at a distance of about 3 km from the state border, border guards recorded 10 rocket bursts fired by a multiple-launch rocket system from Russia.

There was also mortar fire from the enemy territory in Chernihiv region.