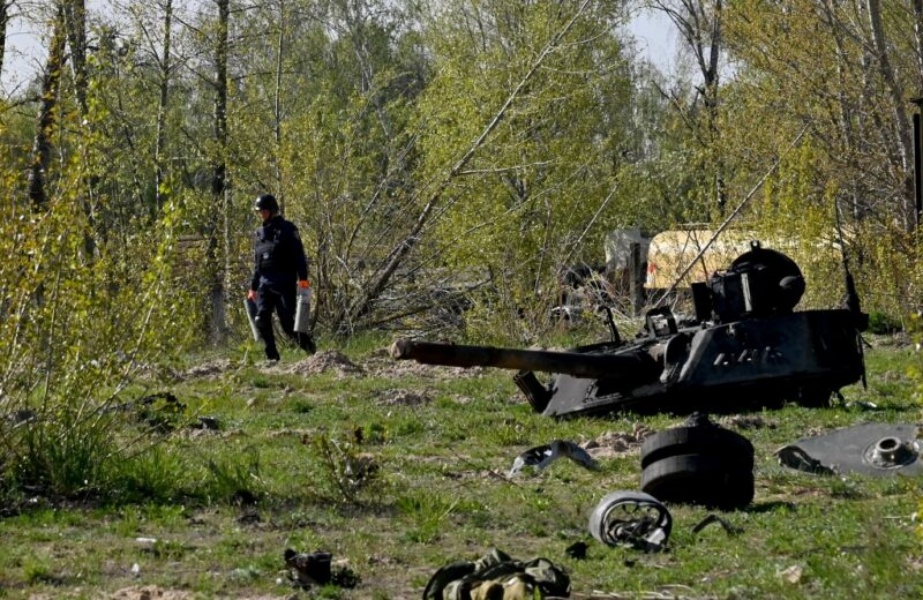 In Mariupol, the Russians continue to block the Defense Forces in the Azovstal area, and in some localities they have renewed the onslaught with air support to take control of the plant. This is reported by the Headquarters.

According to the Zaporizhia Regional State Administration, in the village of Chernihivka Russians are forcing residents to fill out paperwork to deny land ownership. So they want to take it away from people.

Almost 500 more Ukrainians were evacuated from Mariupol and Azovstal.

In an interview with NV, military expert Oleg Zhdanov said that the Armed Forces of Ukraine conducted a local counterattack in the Izyum and Kharkiv areas. The goal is to break up a 20,000-strong group of Russian troops and create conditions for the liberation of Ukraine’s territory.

According to Serhiy Haidai, head of the Luhansk Regional State Administration, the enemy is shelling the entire territory of the region all around the clock from various types of weapons. However, Ukrainian defenders are courageously holding their ground. Evacuation is complicated. According to estimates by the head of the Administration, a total of about 50,000 civilians remain in the territory controlled by Ukraine.

According to official data, the number of children killed in Russia’s war against Ukraine has risen to 223: a 15-year-old volunteer died on May 5 at the Feldman Ecopark in the Kharkiv region, and a 17-year-old boy died on April 23 in Novoselivka, Donetsk oblast – this fact has just been discovered.

Russia steals and exports hundreds of thousands of tons of grain from Kherson, Zaporizhia, Luhansk and Donetsk oblasts. The same applies to vegetables and agricultural machinery owned by Ukrainian enterprises. Confiscation of grain and other products, their illegal export and even attempts to sell stolen abroad involuntarily refer to the tragedy of the 1930s – the Holodomor. The Russian occupiers do not invent anything new and follow Soviet methods.

In the Belgorod-Dniester region, air defense forces neutralized a missile launched by the Russians to hit the infrastructure of the Odessa oblast.

On May 9, in Mariupol, Russia wants to conduct a “parade of war prisoners”, adviser to the head of the President’s Office Mikhail Podolyak said. He called it “a demonstrative mockery of the Geneva Convention by Russia” and recalled that Ukraine lists everyone who humiliates and tortures our prisoners. “These crimes will not be forgotten with time,” Podoliak said.

The enemy began to actively inflict missile and air strikes in the Zaporizhia oblast, in particular in the cities of Gulyaypole and Orikhiv. The Russian army is destroying the civilian infrastructure of these cities with massive shelling. This was announced by the spokesman of the Zaporizhzhya regional state administration, Colonel of the Armed Forces of Ukraine Ivan Arefiev.

In the occupied city of Sorokine in the Luhansk oblast, the process of issuing “passports of the “Luhansk people’s republic” for Ukrainian citizens displaced from recently occupied territories has begun – Ukrainian Chief Directorate of Intelligence reports. It is noted that in case of renunciation of “citizenship” of the pseudo-republic, people will lose any means of subsistence and become subject to repression.

An art work “Bucha Massacre” was opened under the destroyed bridge in Irpen in memory of the victims. Organizers have erected 60 crosses with candles, symbolizing the exhumed in Bucha bodies of people killed by the Russian troops.

Elliminated “orcs” [Russians] are shipped from Kharkiv by wagons – the Ministry of Defense of Ukraine.

Instead, Russia is refusing not only to remove the bodies of its slain accomplices, but also to negotiate on this subject. On the contrary: the Russian Ministry of Defense has ordered the burial of dead Russian soldiers in mass graves, and when this is not possible, to get rid of their bodies in any way available on the battlefield.

During the ceasefire on the territory of the Azovstal plant, the Russian army hit a car that was heading towards civilians to evacuate them. One soldier was killed and six others were wounded, the Azov Regiment said.

In the Kharkiv region, during a special operation of the Security Service of Ukraine, 11 snipers of the Russian Federation, who had been firing on the positions of the Armed Forces of Ukraine were captured. The detainees had been part of the so-called “115th Regiment of the “Donetsk people’s republic”, – Security Sercive spokesman Artem Dekhtyarenko said.

Russian fascists are trying to surround Severodonetsk in the Luhansk oblast through nearby villages, – the head of the city VCA Alexander Striuk said on the telethon by UA Together.

The occupiers are trying to assault from 3 directions at once, but the military of the Armed Forces is holding the ground.

There was another exchange of war prisoners. 41 people were returned, including 11 women. 28 military and 13 civilians are coming back home, including the prior of the Orthodox Church of Ukraine. It was announced by the Minister for Reintegration of the Temporarily Occupied Territories of Ukraine Iryna Vereshchuk.

As a result of the counteroffensive, the Defense Forces of Ukraine regained control over the settlements of Oleksandrivka, Fedorivka, Ukrainka, Shestakove, Peremoha and partly over the village of Cherkaski Tyshky in the Kharkiv oblast – the Headquarters of the Armed Forces announced.

Today three people were evacuated from Severodonetsk, more than 15 thousand locals remain in the city – the head of Luhansk regional state administration Serhiy Haidai said. He also said that “the situation has gotten even worse. The city, which is region’s center, is being chaotically shelled by racists with heavy weapons. The news is disappointing – “orcs” are trying to surround Severodonetsk, breaking through from different directions. Our defenders are holding them back. These battles are very close to the city.”

50 women, children and the elderly were rescued from

On Saturday morning, May 7, the evacuation operation will be continued.

Ukraine has sown 49.3% of the land planned for the current season – Ministry of Agrarian Policy and Food communicated. This is 7.1 million hectares out of overall 14.4 million hectares planned by the ministry.