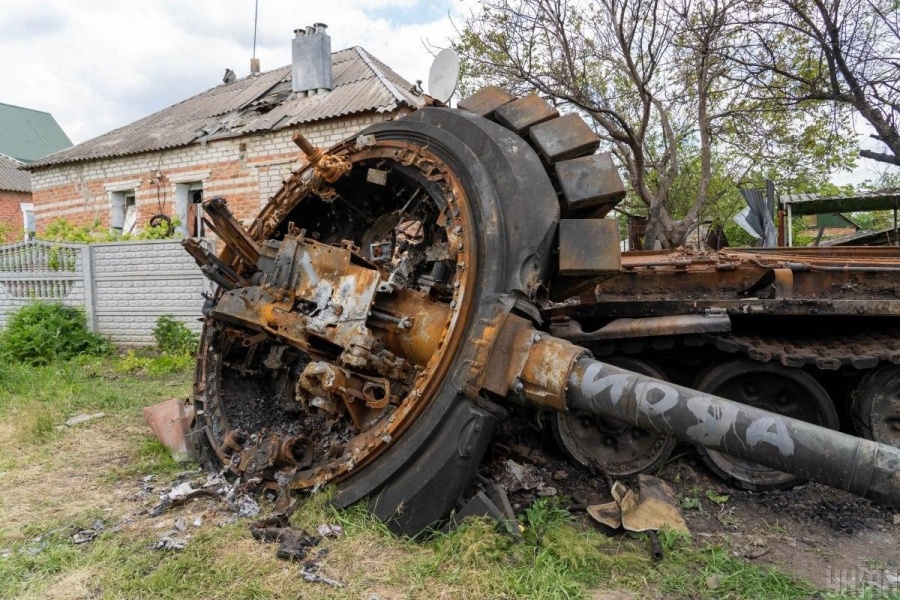 Russia is preparing a “press tour” for Russian and foreign media with a visit to the temporarily occupied part of Kherson Oblast and Crimea. There, fake “evidence” that the Armed Forces of Ukraine ostensibly are shelling the civilians will be shown.

On the night of May 19, the occupiers shelled the Zelenodolsk community in Dnipro Oblast, the governor Valentyn Reznychenko reports.

The Russians fired Grad and Uragan MLRSs at the village of Velyka Kostromka. There are no wounded, but some homes were destroyed, and some others damaged. Currently, the supply of electricity and gas in the village is limited.

Russia has removed a range of commanders from office; they are accused of failing the invasion of Ukraine. However, in the opinion of British intelligence, this will complicate the situation for the occupiers.

“This apparently will overload the Russian centralized model of management and control, as the officers will seek further to transfer the responsibility for decision-making to their bosses. Under such circumstances, it will be difficult for Russia to regain leadership,” the message tells.

The occupiers have launched an airstrike against Bakhmut in Donetsk Oblast, the governor Pavlo Kyrylenko reports.

The shells had hit a five-story residential dwelling, a private house, and an administrative building. In the private house, the rescuers have pulled six people from the rubble; they are in a stable condition. In the five-story dwelling, the whole staircase has been destroyed, but, according to preliminary information, no people have been injured.

The Security Service of Ukraine has revealed a large-scale scheme of stealing humanitarian aid.

Volodymyr Zelenskyy, the President of Ukraine, has discussed the platform for rebuilding Ukraine with Ursula von der Leyen.

The Security Service of Ukraine has arrested the brother of Oleh Tsarov. He had planned diversions in the east of Ukraine.

Andrii Melnyk, the ambassador of Ukraine in Germany, has called on the leaders of France and Germany to perform as mediators. “The Normandy Format had not been ceased, but Putin began the war anyway. We presuppose that France and Germany can continue to be mediators,” Melnyk tells in his RND interview.

President Zelenskyy and Prime Minister Johnson have discussed the provision of additional aid to Ukraine. Zelenskyy has told Johnson about the situation in Donbas, the struggle for liberating the territory of Ukraine and opposing the Russian misinformation. In addition, the interlocutors have talked about the course of negotiation and agreed to intensify their collaboration with foreign partners, including the USA, France, and Germany, to ensure Ukraine’s security in a long-term perspective.

The Russians have created two Marine detachments to gain a foothold on Zmiinyi Island and attack from the sea.

The occupiers have focused on Donetsk’s direction. “The enemy has concentrated its efforts on Donetsk direction, where it is using aviation, artillery, and mortars,” the AFU General Staff reports.

Joseph Biden, the President of the United States, will sign the provision of additional military aid of $100 million to Ukraine. The package is expected to include radars and artillery ammunition.

The United States Senate has given its final approval to send $40 billion in aid to Ukraine. The next stage is the signature of President Biden.

The USA is working to provide anti-ship missiles to Ukraine. They will enable lifting the sea blockade of Ukrainian ports, as Russia will be bound to withdraw its ships.

The Commander-in-Chief of the AFU, Valerii Zaluzhnyi, proclaimed at the meeting of the NATO MC that Ukraine had taken the strategic initiative in its war against Russia.

“We have taken the strategic initiative from our enemy successfully, done critical damage, and made the enemy give up its main goal, specifically, capturing Kyiv. Currently, we are not only defending ourselves; we have to lead a range of counter-offensives. Thus, we have unblocked Kharkiv and Mykolaiv; there are battles in Kherson’s direction,” he highlighted.