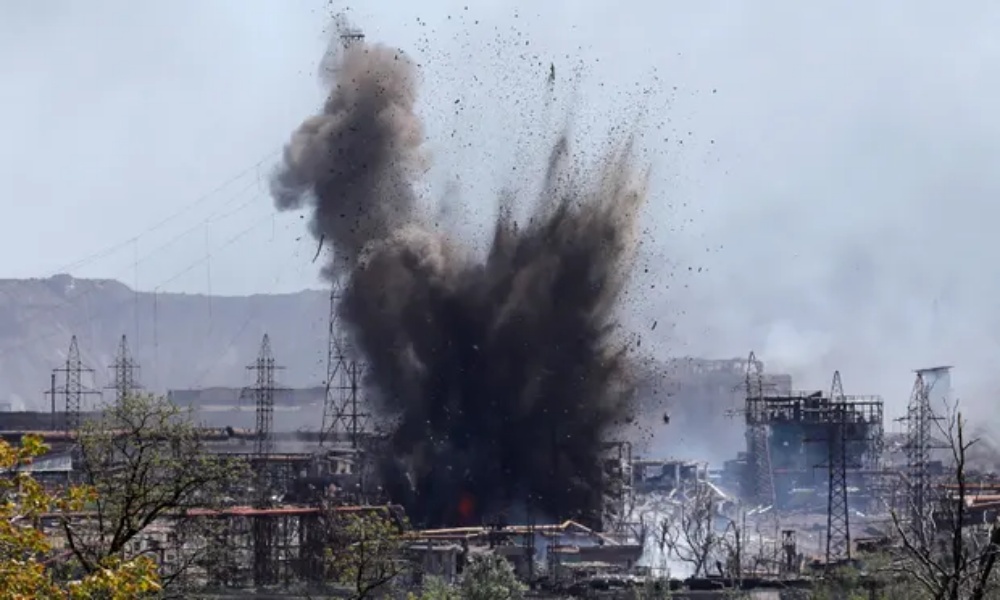 Ukrainian band KALUSH ORCHESTRA qualified for the final of the Eurovision Song Contest in Turin. Here is the link to enjoy the performance of the Ukrainian music group.

On the evening of May 10, Russian aircraft launched two missiles at the village of Voronezh, Sumy region, inflicting significant destruction to civil infrastructure. Fortunately, there were no casualties among the civilian population.

The Russian military launched a missile strike on Slovyansk, Donetsk region. Two districts of the city were affected, there is no information about human casualties yet.

The US House of Representatives has voted to provide another $ 40 billion in aid to Ukraine after President Joe Biden signed the Lend-Lease Act. The Senate is due to vote on the decision later this week.

The Russians attacked the infrastructure near the city of Zaporizhia. The missile was shot down by Ukrainian air defense, but its wreckage fell on a civilian object, causing significant damage.

The Russians shelled a boarding school for children with disabilities in the village of Hirske in the Luhansk region. The Ukrainian authorities managed to evacuate the children in advance. In total, on May 10, Russian troops launched fire on residential areas and infrastructure of the region 15 times.

Serhiy Volyna, the head of the Marines blocked at Azovstal, once again appealed to the world community calling for an extraction procedure for the Ukrainian militaries. “If world civilization still has common spiritual values ​​and ideals, if people can feel the pain and suffering of others, if words of help force us to act, then I call for fighting for the Mariupol garrison!”

226 children died and 417 were injured because of the Russian aggression. Such data were published by the Verkhovna Rada Commissioner for Human Rights Lyudmila Denisova.

The occupiers are raking up the rubble of the drama theater in Mariupol. Residents are forcibly involved in dismantling the destruction. Representatives of the Russian Ministry of Emergencies are also involved. Packages with the bodies of the dead are taken out on the outskirts of the city by tractor carriages and buried in mass graves. In this way, the Russian authorities are trying to hide the traces of their crimes against the civilian population in Donbas.

Donbas is on fire. The occupiers continue to fire on settlements

According to Azov, strategic bombers of the Russian Federation launched attacks on Azovstal 4 times.

Over the past 24hrs, 38 military planes including 4 strategic bombers have made flights to the territory of the Azovstal plant, which is protected by the defenders of Mariupol. The hostile barrel artillery and tanks continue in operation. According to the report of Azov, the enemy did not leave the attempts to capture the Ukrainian fortress and continued to carry out daily assaults with the support of infantry.

Ukraine continues to hold the leading position at the Deaflympics and sets its record.

Currently, Ukraine has 103 medals, followed by the US with 41 medals, Public reports.

In the occupied territories of Ukraine, the cranes of the Shebelinka-Novopskov plant, which transported gas to the gas pipelines of the Luhansk and Donetsk regions, were illegally closed. The aggressor’s representatives deprived Ukraine of the opportunity to transport gas to consumers in the Luhansk and Donetsk regions, said Serhiy Makogon, Executive Director of the Gas transportation system of Ukraine.

A touching photo was published by journalist Andriy Kulikov: an 83-year-old woman who was in besieged Leningrad donated 50 hryvnias to the Armed Forces

“She knows what Nazism is and how to fight it“.

The first phase of the war ended in victory for Ukraine, because the Russians did not achieve any of their goals and suffered heavy losses, said the Ministry of Defense of Ukraine

Patron is already a world star. The Prime Minister of Canada Justin Trudeau spoke about the sapper dog on Twitter

He also added that Canada will help Ukraine to create a map of dangerous areas to clear the territory as soon as possible.

Ukraine has regained control of 1,200 kilometers of the border within Kyiv, Sumy, and Chernihiv oblasts

Two-thirds of this area constitutes the border with Russia, according to the State Border Guard Service.

The difficult situation remains on the border with Moldova in the Transnistrian region. All checkpoints were closed there.

More than 4.8 million Ukrainians have lost their jobs due to Russia’s full-scale invasion of Ukraine, according to a report by the International Labor Organization.

They predict that in the event of an escalation of hostilities, the number of unemployed could increase to 7 million people. Should the war immediately end, 3.4 million jobs can be returned, the organization said.

According to the report, 43.5% of them are Ukrainians who were evacuated abroad and lost their jobs (1.2 million), and another 3.6 million are those who now live in Ukraine and are currently unemployed.

During the day, the Russians launched fire three times at the Zelenodolsk community in the Dnipropetrovsk region. They targeted Zelenodolsk and Velyka Kostroma, there was destruction, but no casualties, said the head of the regional military administration Valentyn Reznichenko.

According to him, “the next probable successive actions of the enemy” are attempts to take control of the territory of Odesa, Mykolaiv, and partly Zaporizhia regions, as well as the creation of a land corridor to the Transnistrian region, the capture of central Ukraine, capture of Kyiv and orchestrating re-elections of legislative and executive bodies.

In Odessa, during fortification work, the military found ancient amphorae dating back to about IV-V centuries BC. They were transferred to the Odesa Archaeological Museum of the National Academy of Sciences of Ukraine.

Today, on May 11, the troops of the Russian Federation launched at least 10 missiles on the private sector of the village of Komyshuvakha of the Zaporizhia region, reports “Public”. Information on whether there were any dead or injured is currently being clarified.

As a result of the shelling evacuation columns by Russians, 33 people died, including five children, said the head of the department of organizational and analytical support of the National Police, Oleksii Sergeyev. 45 such shellings have been recorded since the opening of the “green corridors”, and 74 criminal cases have been opened.

Ukraine has offered Russia to exchange Russian prisoners of war for severely wounded Azovstal defenders, but no agreement has been reached yet, Iryna Vereshchuk writes.

She added that it is currently impossible to unblock Mariupol by military means, and the Russians do not agree on the extraction procedure.

Since the beginning of the full-scale invasion, 788 cruise and ballistic missiles were launched from the territory of Russia and Belarus on the territory of Ukraine, said Deputy Chief of Staff of the General Staff Alexei Gromov at a briefing