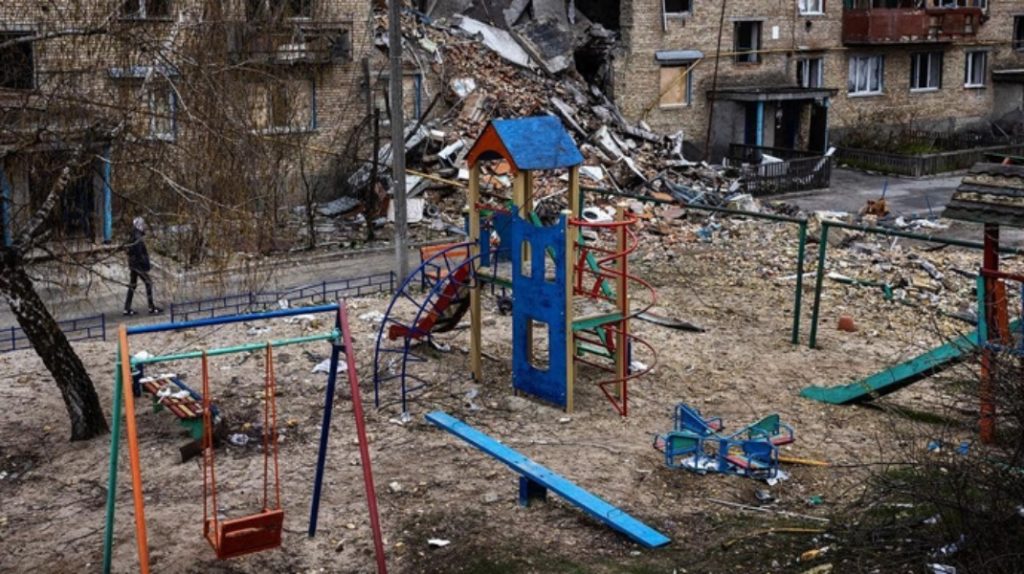 06:55
The General Staff of the Armed Forces of Ukraine reports that there is a possibility of Russian troops’ sabotage at the facilities of the chemical industry of Ukraine aimed at blaming the UAF.

08:45
The Russian military shelled the city of Svitlodarsk and the village of Luhanske in Luhansk region with so-called “propaganda” shells containing leaflets scattered in settlements on the occasion of May 9.

Propagandists also published a video in which one of the occupiers congratulates residents of the settlements that remain under the control of the Armed Forces of Ukraine on Victory Day, wishes “peace and happiness” and promises to “quickly come and liberate them.”

One person was killed and five injured as a result of the shelling by the Russian hostile troops in Odesa. Seven missiles were fired at the city. All of them are “rare, Soviet-style ones noted for poor targeting.”

The SESU said that at 22:35 on May 9, one of the missiles hit the shopping and entertainment center in the village of Fontanka, Odesa district, resulting in destruction with subsequent fire. At 01:20 the fire was extinguished in an area of 1 thousand square meters.

Over the past day, on the territory of the “Azovstal” defended by Mariupol defenders there were 34 aircraft attacks, including 8 by strategic bombers.

Also, enemy ship and tube artillery, MLRS, UR-77, tanks, etc. do not stop firing. The enemy does not stop attempting to capture the Ukrainian fortress and continues daily assaults supported by infantry.

10:10
In the temporarily occupied Izium, out of the rubble of a five-storeyed building destroyed in the first decade of March, the bodies of 44 dead civilians have been found. This is another terrible war crime committed by the Russian invaders against the civilian population. We are recording every crime and they will pay for each of them!

10:35
In Bilohorivka, Luhansk region, the “clearing of the territory” continues. The Armed Forces of Ukraine destroyed pontoons and military equipment of Russian hostile troops. Some of the invaders escaped by swimming.

11:35
In Donetsk region, on May 9, Russian invaders shelled 13 settlements, killing 12 civilians and wounding 7 others. At least 39 civilian facilities were destroyed, including some residential buildings, a vocational school, a religious building, and utility facilities.

Lithuania’s Sejm has approved a resolution recognizing Russia’s actions in Ukraine as genocide and Russia as a state that supports and conducts terrorism. The Sejm voted unanimously in favor of the resolution with 128 votes.

The Ministry of Internal Affairs of Ukraine adopted some managerial decisions aimed at not spreading the symbols used by the armed and other military formations of neo-Nazi totalitarian Russia in the war against Ukraine.

It is reported that from May 9, there is an opportunity to register an electric car, choosing a state license plate with a suffix that begins with the Latin “Y”. In Cyrillic, it reads like U – Ukraine.

International broadcaster Al Jazeera has dedicated a new documentary to the Russian-Ukrainian war. The report showed a refrigerated wagon with the bodies of Russian occupiers liquidated in Ukraine, as well as looted jewelry from the houses of Ukrainians. Meanwhile, Russia claims that there are almost no losses.

It is known what the shopping center “Riviera” near Odesa looks like after the Russian missile attack on the evening of May 9. As a result of the cruise missile strike, three people were injured and hospitalized. The level of damage is being clarified.

Ukraine is looking for ways to apply the procedure of  “extraction” to the defenders of Azovstal, according to the National Guard of Ukraine.

“The President of Ukraine personally and all the leadership of the state are doing their best to evacuate civilians from Azovstal and continue developing an option of the extraction procedure for wounded soldiers, medics and servicemen, including involvement of the world community to solve the problem,” reads the statement.

This afternoon, the Russian army once again hit Sievierodonetsk in Luhansk region with artillery and multiple launch rocket systems. The main gas pipeline was damaged – it was broken and depressurized. The city is left without gas supply.

It is also reported that the Rushists took all the equipment from schools and a hospital in Kreminna.

According to Head of the Luhansk RMA Haidai, all modern equipment has been taken by the occupiers to the Russian Federation. In addition, they took everything they liked from barracks, the dining room, and warehouses. Russians examined every centimeter of the educational institution. Schools of the city were also “freed” by expropriating their property.

As a result of Russia’s military aggression in the capital of Ukraine, 390 buildings have been damaged, 222 of which are residential buildings.

According to the mayor of the capital Vitalii Klytschko, they have already identified 20 buildings, where it is necessary to start restoration first so that people can return to their homes faster. The approximate cost of these works is 5.8 million euros.

Completely unsanitary conditions, open wounds and lack of medication. The Azov fighters demanded immediate evacuation of the wounded. Photos of the wounded and crippled defenders of Mariupol have been published for the civilized world to see in which conditions they live.

The Azov regiment calls on the UN and the Red Cross to demonstrate their humanity and prove the basic principles on which they were established by saving wounded people who are no longer combatants.

Ukraine ceases gas transit through the Sokhranivka gas station due to the loss of control over the Novopskov compressor station in Luhansk region. Almost a third of the gas transit to Europe used to pass through this station.

At the government meeting, Prime Minister of Ukraine Denys Shmyhal says that Russian assets on the territory of Ukraine are transferred to the National Investment Fund. The funds will be used to strengthen the army, support people and rebuild the country.

The Cabinet of Ministers also proposes to introduce a moratorium on increasing tariffs for heat, hot water, gas and its distribution during the war.

Today, at the age of 89, the first president of independent Ukraine Leonid Kravchuk died after a long illness.

Leonid Kravchuk’s contribution to the formation of Ukraine as an independent state is difficult to overestimate. It was during his presidency that the Parliament adopted the Act of Declaration of Independence of Ukraine.

On May 10, the Russians killed three civilians in the Donetsk region –  in Marinka, Avdiivka and Kalynove. Three other people were injured. The information on 4 dead and 8 wounded in Kostiantynivka has also been verified. The exact number of victims in Mariupol and Volnovakha is currently impossible to establish.

Zelensky says that Russia does not agree to any of the options proposed by Ukraine to save the Ukrainian military in Mariupol. He said this during his address to the Parliament of Malta.