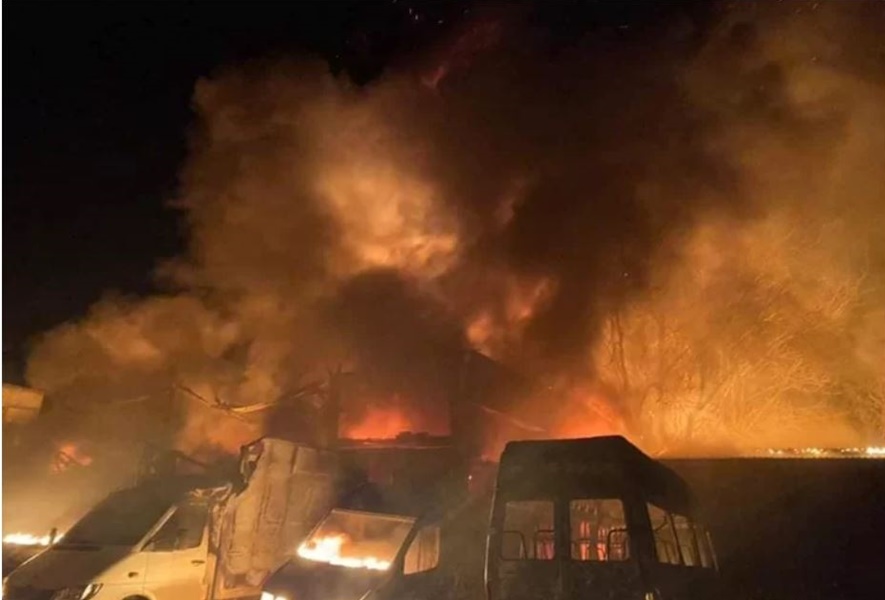 The Kherson Regional State Administration Deputy said that occupants are planning to put into circulation rubles in the region.

‘They [russian soldiers] will force many store workers to accept rubles instead of hryvnias and, most likely, pay salaries to ‘the new administration.’ I do think that eventually, all municipal institutions will receive a salary in rubles, too.’

In Trostyanets, Sumy Oblast, the Russian occupants shot dead a woman cycling through the city, according to Dmytro Zhyvtskyi, the head of the regional state administration.

As he says, Russians don’t allow to bury the dead. Also, there is a big problem with storing bodies in the morgue.

‘Women are giving birth right in their homes; there’s no opportunity to reach a hospital. It [hospital] was shelled repeatedly,’ Dmytro says.

Besides, he stated that terror continues in the settlements of the Krasnopillia.

Russian invaders have looted and destroyed the latest Central Analytical Laboratory, located in Chornobyl. The laboratory is worth 6 million euros, according to the State Specialized Enterprise Chornobyl NPP.

‘The laboratory stored highly active samples of radionuclides. For now, they are in the hands of an enemy. We hope invaders will harm themselves [with radiation], not a civilized world.’

‘In the afternoon of March 20, the MP worked in the humanitarian headquarters, helping in refugee resettlement places. As always, he helped his hometown with funds, equipment, and resources. After that, we lost contact with him; we aren’t aware of his location now,’ the operational headquarters of the Berdyansk executive committee reported.

In protest against Ponomariov’s kidnapping, the enterprises associated with him ceased their operation.

‘As humanitarian needs are already at an all-time high, the Kremlin-made war threatens food security across the world.’

In the Kyiv region, the occupants destroyed a vegetable storehouse and sausage manufactory. The losses of the agro-industrial company exceed 600 million UAH, said the company’s co-owner Yevhen Kolomiets.

‘Dozens of tons of produce were destroyed. This is another blow to meeting the nutritional needs of the Kyiv region and all of Ukraine. From the first day of the war, we sent fresh vegetables to feed our soldiers. Unfortunately, we won’t be able to do that now,’ he wrote.

On March 22, Russian occupation forces intensified shelling in the Luhansk region. In the city of Rubizhne, the Russian occupants hit a high-rise building. The shell exploded on the fifth floor. Rescuers found three dead; two of them were children, reported the Head of the Luhansk Regional State Administration Serhii Haidai.

In Chernihiv, at night occupants dropped air bombs on the bridge across the Desna River. The bridge connects the city with Kyiv. As s result of the airstrike, one of the bridge spans fell, said the Head of the Chernihiv Regional State Administration, Vyacheslav Chaus.

Nevertheless, damage to the bridge by airstrikes does not prevent the authorities from providing humanitarian aid, persuades Mr. Chaus.

‘We’ll provide the city with food and everything needed. We’ll definitely build a new one [bridge]. Much better than the previous one. The bridge was oldish anyway. Thus, as a hero city, Chernihiv deserves the coolest, newest, and modern bridge. And we’re sure that we’ll construct it after our victory,’ he states.

The occupants once again shelled Kyiv, particularly the Sviatoshyno district. The fires have already been extinguished; no one was injured. As a result of shelling, the premises of the shopping center and two private houses were damaged, the Senior Advisor of the mayor reported.

Rescuers and medics are still working in the Shevchenkivskyi district. Currently, there are fires in several private houses and high-rise buildings. Four people were injured. Information about the victims and the nature of the destruction is being clarified.

As of the morning of March 23, 121 children have died since the full-scale Russian invasion of Ukraine. Another 167 received injuries.

As a result of the bombing and shelling, the occupiers damaged 548 educational institutions: more than 220 schools and 155 kindergartens. Of these, 72 were completely destroyed.

At night the invaders shelled Ingulsky district of Mykolaiv. As a result, a warehouse and five cars parked nearby caught on fire. Almost at the same time, the enemy shelling also hit a two-story apartment building in the same district. The building was destroyed and a fire broke out. Two people died.

In Kyiv region, the Armed Forces of Ukraine encircled Irpin, Bucha and Hostomel. At the same time, many villages remain under occupation, according to Bucha City Council.

People living in Makariv, Bucha, Irpin, Dmytriv are under persistent enemy fire. The villages of Zahaltsi, Halynka, Kachaly, Stara Buda, Myrcha, Talske of the Borodyanka community are occupied and have no cellular connection there.

Survey conducted by the sociological group “Rating” shows that as a result of the Russian invasion, the economic situation has significantly deteriorated for 52% of Ukrainians. 53% of Ukrainians who had a job before the war are currently unemployed. Another 21% work remotely or partially.

Russian invaders destroyed the building of the Arkhip Kuindzhi Art Museum in Mariupol, according to the City Council. Original paintings by world-famous artists were stored there.

The museum’s collection included around 2,000 exhibits, including works of art, decorative and applied arts, graphics and sculpture.

“The original works of Ukrainian artists – Ivan Aivazovsky, Mykola Glushchenko, Tatiana Yablonskaya, Mykhailo Deregus and others were kept in the museum. Their fate is currently unknown.”

Russia’s genocide against people in Mariupol continues. People are burying the dead in residential areas since they can’t get to the cemetery due to heavy shelling. Translated note written by a resident of Mariupol:

Dima, mom died on March 9, 2022. She died quickly. Then the house burned down. Dima, sorry I didn’t save her. I buried mom near the kindergarten.

In Chernihiv region, the Russian occupants are distributing propaganda leaflets claiming that Russia does not wage war against the civilian population, but instead guarantees security and freedom of speech for them, the Operational Command North reports.

Since the beginning of the full-scale invasion of Ukraine, the Russian inviders have shelled at least 58 ambulances and killed six medics. The Ministry of Healthcare is forced to equip doctors with bulletproof vests, the Minister of Healthcare Viktor Lyashko states.

Mariupol continues to suffer from air and artillery strikes. The Russian invaders are constantly shelling the city, including residential areas.

Photo: Mariupol in a satellite photo, taken by Maxar Technologies