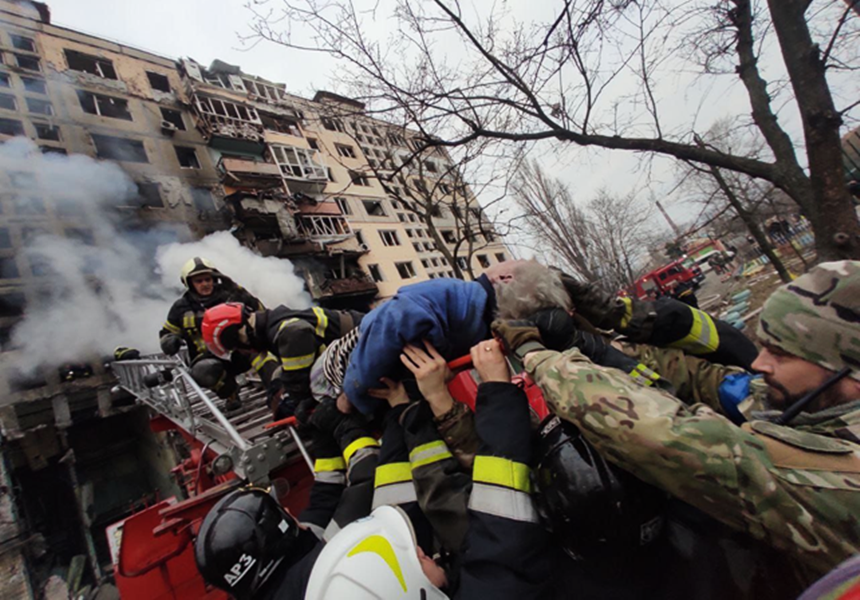 One of the pregnant women, who suffered in Mariupol from the occupies’ air strike on the maternity hospital, died along with her unborn child, said Asya Dolina, the journalist of «Voice of America».

In the city of Kyiv, the shell hit a house in the Obolon district. 2 people died, 3 were hospitalized. The «Antonov» plant also got under fire.

Russia continues shelling Avdiivka from Tochka-U (Scarab B) and multiple rocket launchers. The head of the Donetsk military regional administration Pavlo Kyrylenko reported about it in Facebook.

«The shelling of Avdiivka has been going on since last night. Russians are firing from Scarabs B and multiple rocket launchers.  The occupies released one package of hail (BM-21 Grad) at the Avdiivka Coke and Chemical Plant. In addition, they damaged the gas pipeline, school and private houses», – the head of the region wrote.

According to the State Enterprise «National Nuclear Energy Generating Company «Energoatom», transporting connection between Enerhodar and Zaporizhzhia is lost.

«The occupies bombed the bridge near Kamianske. Convoys and evacuation of people is still impossible. Detour is possible only on bad roads through hot spots, where the enemy’s battle positions are located. The rashists don’t let them go through Tockmak and other settlements along the way», – the statement said.

As of the morning of March 14, 90 children were killed and more than 100 were injured because of the armed aggression of the Russian Federation. According to the Office of the Prosecutor General of Ukraine. The largest number of victims are in Kyiv, Kharkiv, Donetsk, Chernihiv, Sumy, Kherson, Mykolaiv and Zhytomyr regions.

Only yesterday in Mykolaiv region as a result of attacks of civil infrastructure, two children were killed and two more were injured.

4th round of negotiations with Russian has started — Mykhailo Podoliak, the advisor to the head of the Office of President of Ukraine, said.

About peace, ceasefire, immediate withdrawal of all troops and security guarantees. A difficult conversation. Although Russia is aware of the absurdity of its aggressive actions, they are still under illusions, that 19 days of violence against peaceful cities is the right choice of strategy.

«Ghost towns. The occupiers continue to destroy citizens and settlements of Luhansk region. There were 57 cases of shelling of cities and towns of Luhansk region during the day. As a result of the «Russian liberation» there are dead and injured civilians. It is extremely difficult to count exactly, because the shelling does not subside», – the head of the region wrote.

According to him, people in social networks report on the search of people as there are a lot of those who have disappeared.

Haidai stated that 47 private and multi-storey buildings and infrastructure facilities in such cities as Sievierodonetsk, Lysychansk, Rubizhne and Popasna were destroyed or damaged yesterday.

The shelling also damaged two schools and a gas pipeline in the city of Sievierodonetsk.

In the near future, the occupiers plan to “dispose” of ammunition on the site of the station near the destroyed training center ZNPP.

This means that the enemy forces planned to detonate ammunition right next to the first power unit of the nuclear power plant, according to the Ukrainian state enterprise Energoatom, which is the operator of the Zaporizhzhya NPP.

We remind you that Russian troops have been on the territory of the ZNPP since March 4, carrying out a devastating blow to the training center.

Occupiers fired artillery at houses of civilians in the settlement of Nyzy, in the Sumy region.  In addition, critical and civil infrastructure facilities were damaged, said Dmytro Zhyvytskyi, head of the Sumy Regional State Administration.

The Ombudswoman for Human Rights in Ukraine stated that as of 10 o’clock on March 14, since the beginning of the Russian invasion, 90 children were killed and 100 injured, according to the register of pre-trial investigations.

However, according to her, the actual number of victims or dead is currently impossible to determine precisely due to active hostilities.  Many children who are in urgent need of medical care are still trapped.

“We were informed that Met Iryna, born in 1980, and her son Met Ivan, born on December 4, 2009, were buried in the yard of a residential building in Irpin. They died during the shelling of the city by the occupants.

One of the pregnant women who survived an air strike on a maternity hospital in Mariupol on March 9, 2022, died today together with her unborn child.

The shelling of the civilian population of the Izium district of the Kharkiv region continues.  Cars were shot bythe occupiers at a checkpoint, killing a woman with a child and a family with a 3-year-old child.

A 15-year-old girl died in the town of Dergachi, Kharkiv Oblast, after night shelling”.

According to Energoatom, there are currently 11 Rosatom members at the Zaporizhzhya NPP.

“It is evident that the detonation of ammunition on the site of the station is carried out with their direct participation.  So Rosatom is also involved in this terrorism.  All established international rules and requirements for nuclear and radiation safety are violated by Rosatom,” the appeal of the Ukrainian state-owned enterprise Energoatom reads.

It is currently unknown whether the radiation background at the Zaporizhzhya NPP has changed.

The occupants are deliberately firing on agricultural machinery to prevent the sowing campaign and cause a humanitarian catastrophe in Ukraine and the world, according to the Main Intelligence Directorate of the Ministry of Defense of Ukraine.

“Systematic cases of such actions have been recorded in Brovary district (Kyiv region), Melitopol district (Zaporizhzhya region), Pryluky, Nizhyn, Novgorod-Siversky districts (Chernihiv region), and in a number of districts of Kherson and Kharkiv regions.  Also, agricultural machinery is requisitioned en masse by the invaders for engineering work, construction of fortifications and for use as tractors for armored vehicles.  The local population in the occupied settlements is forcibly involved in this activity.”

Occupiers fire at the civilian population of the city of Izium, Kharkiv region.  On the way out of the city, the militants fired artillery at a private minibus.  The fate of the passengers is currently unknown.  The enemy is constantly shelling with aircraft and artillery day and night.  There are no possibilities for the delivery of humanitarian aid or evacuation, and the city is cut off from light, water and heat.  It is impossible to determine the number of civilian casualties, said Lyudmyla Denysova, Ukraine’s human rights ombudswoman.

“The town, which before the war had only 46,000 inhabitants, is now almost wiped off the face of the Earth, the infrastructure is completely destroyed.  Such actions by the occupying forces are a crime of genocide under the UN Convention on the Prevention and Punishment of the Crime of Genocide.  I call on NATO to close the skies over Ukraine!  The enemy is killing our cities!”

Photo of one of the destroyed buildings, distributed by the ombudswoman.

As a result of the Russian attack, a Fox News journalist was injured.  Doctors diagnosed a fragmentary fracture of both his legs.  Now the journalist is in intensive care unit under the supervision of specialists, said the Prosecutor General of Ukraine Iryna Venediktova on her private Facebook account.

“The tragedy happened today 2 hours ago [since the publication of the post].  I intend to focus, in particular, on those war crimes that have affected the citizens of our partner countries.

I understand that the issue is sensitive, but I hope that the leaders of the civilized world will soon dare to decide to close the sky.

Once again, I would like to address our partners – a citizen of your country was on the territory of Ukraine, performing an editorial task.  <….> This man was not at the military facility, which, according to Russian officials, they are constantly targeting.  He was seriously wounded while not at the military facility.  Of course, information about the crime has been entered into the URPTD (Unified Register of Pre-trial Decisions) and these proceedings will be properly investigated. His health is in the hands of doctors now”.

The photo, distributed by Iryna Venediktova, shows the journalist’s accreditation.

Kadyrovites planned to seize a kindergarten, the adviser to the head of the Ministry of Internal Affairs Vadym Denisenko reports.

Law enforcement officers analyzed a video released by Chechen leader Ramzan Kadarirov and concluded that the Kadyrovites planned to seize a kindergarten and its residents, and then blackmail the whole of Ukraine and the world.  The children were evacuated earlier.

“I do not have the authority to comment on whether Kadyrov is on the territory of Ukraine, but the Interior Ministry analyzed the video posted by the leader of the Chechen militants … It was in one of the orphanages in Kyiv region that they shot their video.  Fortunately, the children were evacuated earlier. ”

He noted that the purpose of Kadyrov’s video was to show that he was fighting with his militants in order to whitewash the reputation of his units, which are used only as barricades.

Humanitarian cargo to Mariupol remained in Berdyansk, as the occupants  did not observe the regime of artillery silence.  Tomorrow morning there will be a new attempt to get to the City Council.

“Preliminarily, if a green corridor is opened tomorrow and there is a ceasefire, then the humanitarian caravan will continue to move to Mariupol, where 400,000 Mariupol residents need help.”