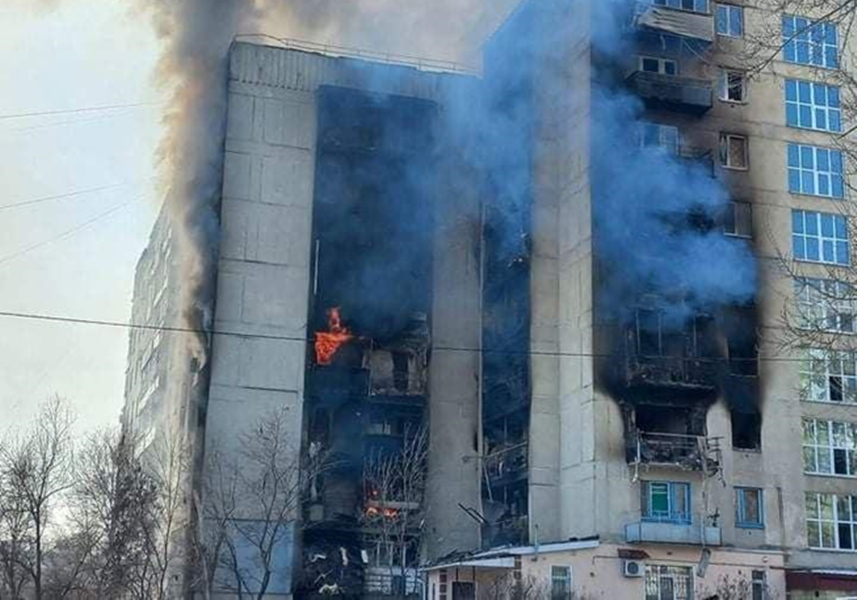 According to the UOC press service, as a result of shelling by Russian forces, the Svyatogorsk Lavra of the Donetsk region was damaged – particularly, the room where the refugees lived.

A missile and bomb strike was carried out in Iraq.  The rockets landed near the US consulate and Kurdistan 24 TV station in Salah ad-Din in Erbil.  No one was killed.  The explosion damaged the building of the TV channel “Kurdistan 24

As a result of an air strike by the occupants in Chernihiv, the 2nd to 9th floors were demolished, followed by the burning of the 9th floor apartment building. At the scene of the fire 10 units of equipment and 48 men of personnel, as well as a group of pyrotechnic works and underwater drilling are working.

According to latest information, 7 people were injured, 1 was killed. Information about the killed and injured is being clarified.

In Ivano-Frankivsk the Russian occupants struck at the airport again.

“According to previous information, today’s early explosions were caused by a strike on the airport. Now the details are still being clarified” – says Ruslan Marcinkiv, Ivano-Frankivsk Mayor.

“The Russian servicemen hit the International Peacekeeping and Security Centre Yavorivskyy, polling station in Lviv Region, to show that there is no peaceful place in Ukraine and thus demoralize the Ukrainian public”, the Interior Minister’s advisor, Vadym Denysenko, said.

“According to the previous data, close to 30 crilate missiles were launched. The aircrafts flew from the Russian city of Saratov to the Black Sea. This is where the strikes took place.” – Andriy Sadovyy, Lviv mayor.

At night, near the Brusyn station in the Donetsk region, the Russian army fired at an evacuation passenger train bound for the Lyman – as reported by Ukrzaliznytsia, the Ukrainian railway.

One conductor was killed and another was injured and is currently in hospital.

One leader was killed, another was wounded in the hospital.

The occupiers kidnapped the mayor of Dniprorudne Yevhen Matveev, said the head of the Zaporizhia regional administration Alexander Starukh.

On February 27, Interior Minister’s adviser Anton Gerashchenko said that Matveyev and locals had met with Russian tanks and forced them to turn around.

Defense Minister Oleksiy Reznikov called on NATO to close the sky over Ukraine after the attack on the International Center for Peacekeeping and Security in Lviv Region.

“Foreign instructors work here.  This is a new terrorist attack on peace and security near the EU-NATO border. Steps need to be taken to stop this. Close the sky,” – he wrote.

This morning in Chernihiv, a shell fell near the hospital where people with chronic kidney disease were having hemodialysis, Roman Shurduk, general director of the medical center reports.

The journalist was able to comment on this terrible situation: https://fb.watch/bJ_ZONn_Fs/

14:00
The Russian occupiers’ artillery forces attacked Pushcha-Vodytsia psychoneurological nursing house in Kyiv. One shell hit the boiler room, the other fell on morgue, according to the Kyiv City State Administration.

The blast wave partially damaged the residential building of the institution. At the time of the shelling, nursing house patients and staff were evacuated to safe place. Specialists are currently working at the site of the shelling.

16:00
As of 13 March, 979.5 thousand households were left without electricity, and Mariupol was completely shut down as a result of the occupier’s destructive actions, German Galushchenko, Minister of Energy of Ukraine states.

“There is a lot of damage in the area of active hostilities. We are working on restoring power supply. But, unfortunately, we are not able to restore it as fast as the damage and destruction occurs,” the Minister said.

17:00
The Russian occupiers carried out an air raid on one of schools in the Mykolaiv region, Vitaliy Kim, the Head of Mykolaiv Regional Military Administration reports.

18:00
Serhiy Haida, Head of Luhansk Regional State Administration reports: in Siverskodonetsk, Rubizhne and Popasna dozens of houses are on fire. There are victims, rescuers are working non-stop.

Dozens of apartments and a vocational school building were on fire in Siverskodonetsk today as a result of the shelling by Russian army. In the early morning militants fired at the Holy Christ Christmas Cathedral. In Rubizhne, as a result of the shelling, garages and private houses caught on fire, and the gas pipeline was cut off. In Popasna, residential buildings, garages and a carriage repair plant caught on fire as well. Currently, the shelling of Zolote town and Toshkivka village is still taking place.

The State Emergency Service of Ukraine reports that in Zelenyy Gai village of Mykolaiv region, the school building was destroyed and fire the broke out as a result of an air strike. Tentatively, 4 people died and 3 more were injured.

Kharkiv is under devastating shelling by the occupiers. Firings are heard all over the city, mainly in Saltovsky, Odesky and Moscowsky districts of Kharkiv.