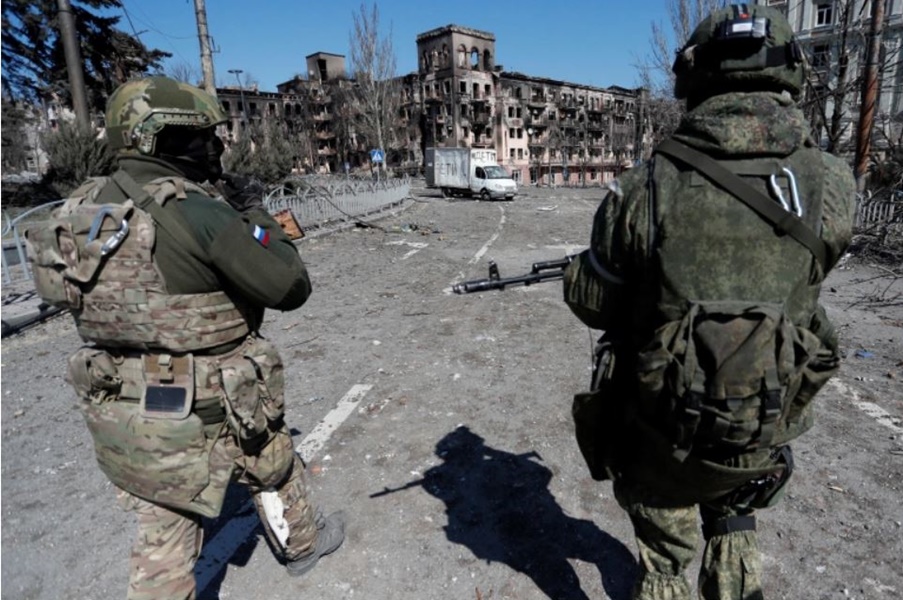 Russia’s original invasion plan aimed in particular at simultaneous seizure of Kyiv, Kharkiv and Odesa has failed. Currently, the Russian troops are being regrouped in order to support the offensive operations in the Donetsk and Luhansk regions, most notably the city of Mariupol, with the aim to move the front line to the administrative boundaries of those two regions, and to make another attempt to seize the city of Kharkiv. A large-scale ground operation is expected:

The territory of Belarus is actively used by Russia for its military purposes:

Kremlin attempts to conceal truth about war and real losses of the Russian troops in Ukraine:

Having failed to make Ukraine surrender after a “Blitzkrieg”, Russia started searching for fake pretexts to “justify” its war of aggression:

Ukraine has activated its right for self-defense according to the UN Charter Article 51. We continue to fight and we will win:

Faced with military defeats, losses of personnel and vigorous resistance, the Russian troops began indiscriminate attacks on Ukrainian cities with missile strikes and heavy artillery. Being aware that it will not be able to win this war, Russia deliberately destroys Ukraine’s economy:

Humanitarian situation is rapidly deteriorating. The Russian troops commit war crimes which need to be investigated and those responsible brought to justice. We expect international community to condemn these war crimes and contribute to bringing Russia to justice:

According to the Office of the Prosecutor General of Ukraine (as of 13 April):

Responsibility for Russia’s war against Ukraine lies with the entire Russian society, not only president Putin and his proxies. All of them must bear the consequences:

We welcome all steps made by the international institutions to bring Russia to justice, as well as statements made by the heads of state and government throughout the world, on Russia’s responsibility for war crimes:

The world supports Ukraine. We welcome that the foreign diplomatic missions are coming back to Kyiv. By continuing its war of aggression against Ukraine, and committing war crimes, Russia becomes increasingly isolated:

Ending the war, launched by Russia, remains Ukraine’s key priority. Six rounds of Ukrainian-Russian negotiations were held on 28 February, 3 March, 7 March, 14–16 March, 21 March, and 29 March. At the last round of negotiations on 29 March, the Ukrainian side has officially presented its proposals on the new system of security guarantees for Ukraine:

Despite atrocities and war crimes committed by the Russian troops in Ukraine, as well as Russia’s public statements, negotiations with Russia, as well as consultations with the possible guarantee states continue:

5. ACTIONS BY THE INTERNATIONAL COMMUNITY

Ukrainian people are dying for the freedom of Ukraine and Europe. We strive for a full-fledged EU membership and expect further steps on it to be taken as fast as possible, in particular obtaining the candidate status for membership until June:

We are grateful for the decisions already taken by our friends and partners. Some of them were unprecedented, such as EU providing 1.5 bln EUR to the Armed Forces of Ukraine (within the European Peace Facility) or neutral Switzerland freezing 8 bln EUR of Russia’s assets:

The unprecedented sanctions (nearly 6000 as of now) are of particular importance, isolating Russia’s economy and severely undermining its economic and financial capacities to continue aggression. Atrocities, which continue to be committed by Russia in Ukraine, confirm that sanctions must be further strengthened and expanded, as well as introduced by those countries which have not made this until now. The world has to stop buying Russian commodities, which continue to finance Kremlin’s war against Ukraine:

Half-measures are not enough. Hesitancy to impose comprehensive sanctions and supply heavy weapons to Ukraine will be taken by Russia’s leadership as a permission to procced with its war against Ukraine. Further actions need to be done immediately to stop Russia’s war machine:

Russia continues to demonstrate that it understands only the language of force. Russia’s attack on Ukraine has shown that if NATO remains silent, the situation on the world stage will worsen. The war launched by President of Russia, must be stopped. It is not in the interest of Russian and Belarusian citizens:

One of Russia’s key goals in the war it has launched is to destroy Ukraine’s economy, to make us a “failed state”, which would not be able to resist Russia’s pressure and influence:

We do our utmost to thwart Russia’s plans and to keep Ukraine afloat:

We are grateful for all financial and technical assistance urgently provided to Ukraine. This strengthens our resilience to Russia’s war:

We need to restore Ukraine’s economy when we win. We will need further significant support by the world in rebuilding our country from Russia-brought destruction: