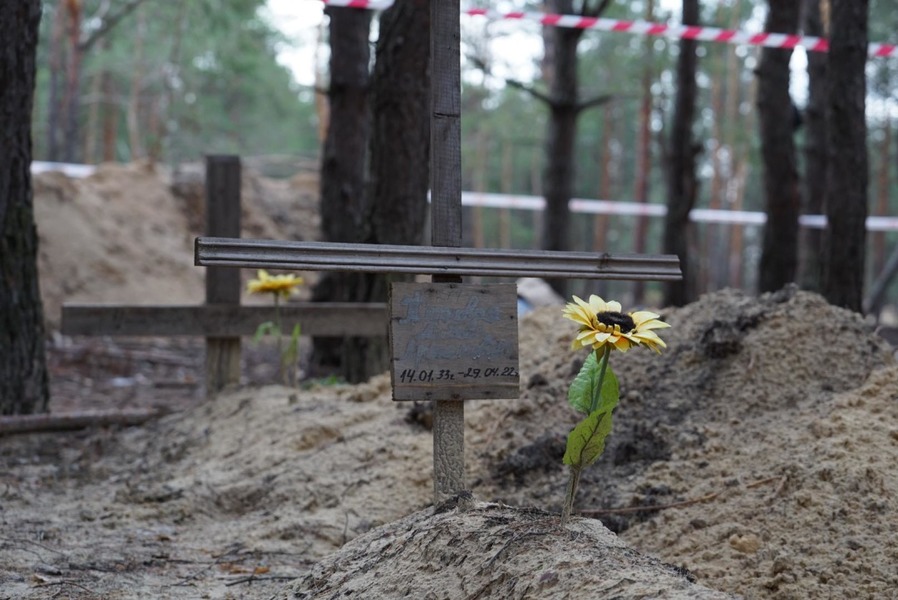 A mass murder in Izium – a town near the Russia-Ukraine border – could be the end of the «Russian world» as we know it. I believe Kremlin officials are well aware of this, so they strive to influence the developments in their usual way, — says in his article for Polinard director of Institute of World Policy Yevhen Mahda.

The spearhead counteroffensive by the Ukrainian troops led to the liberation of almost the entire Kharkiv region and destroyed Putin’s plans for the occupation of the neighboring Donetsk region. Mass graves were discovered in the liberated settlements, where bodies of tortured prisoners and civilians killed by Russian shelling had been buried.

Izium is a key point for the offensive in Donetsk region, which is why the Russian forces launched heavy strikes on the town for a whole month at the onset of the large-scale invasion. Three quarters of the town were destroyed. A mere 20% of the pre-war population remained in place.

However, this is not all the terrifying truth about the fate of the town with such a “sweet” name (izium is translated from Ukrainian as “raisins.”) After the occupiers were expelled, mass graves were discovered there. Bodies of civilians who died as a result of Russian strikes, as well as executed Ukrainian soldiers, were exhumed. More than 400 people buried there died a violent death. It’s the “Russian world” that killed of them, with a sense of impunity. It is not difficult to find a quote by Vladimir Putin, who claimed that «during the special military operation, any occupation is off the table.» In Izium and other settlements of Ukraine, which were occupied by Russian troops, the scenario of developments could have been different, but it all boiled down to mass murder. By the way, any media outlets reporting the truth about the Russian crimes in Izyum should be prepared for powerful cyberattacks, given the extreme sensitivity of this topic for the Kremlin. The Russian Federation is trying to deny its atrocity through government-controlled media and across international platforms, in an attempt to shift the own blame on someone else.

Izium is located really close to the Russian border, but the occupiers were not at all deterred by the prospect of horrifying news being spread to the residents of Russia’s Belgorod region by word of mouth. It seems that Russian authorities are confident in the effectiveness of their propaganda. Moreover, in Kharkiv region, the international community received confirmation that the misanthropic attitude towards Ukrainian citizens is in fact part of Russia’s state policy. It has been implemented for years (recall the “crucified boy” hoax report blaming Ukrainian forces). So someone must stop Russia from pursuing this policy.

The international community, just as the United Nations did at the end of World War 2, should set up a special tribunal to try Russian war criminals. Nothing will save them from being held accountable – neither a million-strong army and the latest «self-mobilization» announced across Russian regions nor their plans to strengthen army ranks at the expense of contracted convicts, nor a powerful propaganda machine.

The liberation of Izium and the truth about the Russian war crimes must mark the end of the «Russian world.» The concept was created as an alternative to the «rotting West» and was supposed to be a symbol of opposition to the U.S. and its allies. However, over the past six months, everyone had a chance to learn that the only thing Russia offers is death to its neighbors and a threat to the whole world.