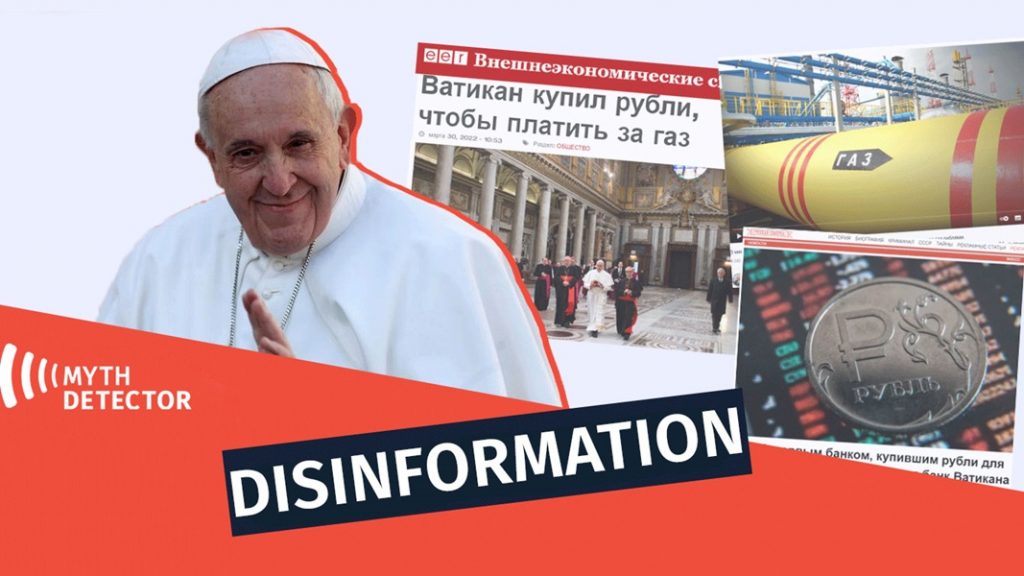 Russian media report that the Vatican Bank allegedly made a payment for Russian gas in rubles. It is noted that the state, located in the center of Rome, has bought 10 million euros worth of rubles in the Central Bank of Russia. According to Russian sources, the Vatican has taken all the necessary steps in the process of buying gas for rubles.

The method of purchasing energy resources for the Russian currency was previously determined by the government of the Russian Federation. The Telegram channels Readovka, Кровавая барыня (Bloody Lady) and others also wrote about the Vatican Bank, even joking: “His Holiness promised us the joys of paradise on gas.”

In fact, this turned out to be another lie, which the Russian media hastened to happily spread to prove its right and another victory. The Russian media did not have any imaginary “sources”. The media fell for the bait of a satirical publication by one of the Twitter users, who later apologized for it. Despite this, many websites and social media users have published this information as reliable without verifying.

Information about the purchase of Russian gas by the Vatican for rubles was checked and refuted by the Myth Detector, Peril of Africa and Oilprice.com.

As you know, Russian President Vladimir Putin has ordered government authorities, Gazprom and the Central Bank of Russia to agree on payment in rubles for Russian gas with the so-called unfriendly countries. However, on March 28, the G7 rejected Russia’s request, stating that it would be a unilateral violation of the treaties. The next gas blackmail of the Kremlin failed, like all the previous ones.